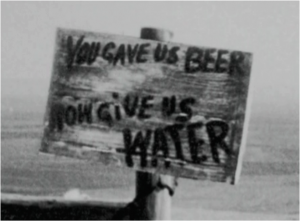 There is no better time than the Thanksgiving Holiday to explore the connection between our food and the land it comes from. Ken Burns, America’s premiere documentarian, has tackled topics from jazz to the Civil War. His new film chronicles the Dust Bowl, the massive ecological disaster that plagued a large swath of U. S. farmland during the 1930’s.

The same forces that wreaked havoc on soil and farmer’s livelihoods in the Dust Bowl era are in play today. Producers are once again going all out in response to soaring crop prices. Market forces coupled with misguided federal policies have encouraged dangerous, industrial-scale monocultures of corn and soy across the Midwest.

Writing about the Holiday weekend in the Huffington Post, author Frances Moore Lappe highlights the connection between what we eat and how it dictates what is grown “In the U.S., 43 percent of all cropped acreage, and the most fertile share, goes to just two crops — corn and soy. Yet they aren’t really food but raw materials that hardly ever turn up in our mouths directly.”

Misguided farming practices at the heart of the disaster

The opening episode of the 4-hour epic that premiered on PBS on November 18 goes right to the cause of the problem. In a short time, farmers converted an area twice the size of New Jersey and centering in the Oklahoma Panhandle from native grassland to wheat fields. They did so because of a concerted policy in the 1920’s to industrialize agriculture and to “turn farming into a factory.” But the wind-swept prairie that dominated the region was unsuited for growing much, aside from drought- resistant grasses. Once farmers turned over the firm soil, they set the stage for a monumental disaster,

“Suitcase” farmers from back East –precursors to today’s Wall Street investors and absentee landlords – added to the problem by irresponsibly abandoning 4 million acres to “blow with each new wind” when the drought hit.

“A sea of grass once the domain of Indians and buffalo disappeared beneath the plow,” says Peter Coyote, the actor who narrates the documentary.

“We were just too selfish and we were trying to make money. It didn’t work out,” says an Oklahoma survivor of the disaster.

“A classic tale of humans pushing hard against nature and nature pushing back,” says New York Times columnist Timothy Egan, who authored the book, “The Worst Hard Time: The Untold Story of Those Who Survived the Great American Dust Bowl.”

Hugh Bennett, founder and head of the Soil Conservation Service, was tasked by President Roosevelt to find a solution. He characterized the basic cause of the problem as “an attempt to impose upon the region, a system of agriculture to which the plains are not adapted.”

Because of this human-caused disaster, American agriculture went into a downward spiral as land prices cratered, cattle herds were culled at government expense, farmers committed suicide rather than face foreclosures, and children succumbed to deadly pneumonia caused by inhaling wind-blown dust or got lost and died when “dusters” hit.

Ken Burns’ documentary shows how a few farmers survived the Dust Bowl – even before the drought broke – by employing simple conservation practices. They used plows that didn’t pulverize the soil and planted crops on the contour. Passions rose so high that some of these farmers demanded that martial law be declared to force their neighbors to take conservation measures. Soil blowing from neighboring fields was destroying farms downwind, even if those downwind farmers were doing a good job keeping their own soil in place.

In the mid 1930’s the federal government stepped in to buy and repair close to 4 million acres of utterly destroyed cropland – leveling drifting dunes of eroding soil and planting grasses.

By the end of the 30’s, conservation practices combined with a break in the drought started to reverse the course of the disaster. But during World War II, wheat prices soared, causing many farmers to return to the same destructive practices that had led to the Dust Bowl in the first place.

Suitcase farmers and land speculators revisited to the scene, and millions of acres of the most vulnerable acres went back under the plow. The dust blew again in the early 1950s when dry weather returned.

Farmers who stuck to good conservation practices helped mitigate some of the damage, but most turned to irrigation to keep the soil in place and crops growing. Farmers tapped into water in the Ogallala aquifer to transform a region best suited to growing grass into a region dominated by production of the thirstiest of all crops, corn.

Running out of time, again

Today high crop prices are fueling a new phase of American land use mistakes. And overly generous crop insurance subsidies encourage farmers to take risks with their land and water. When taxpayers pick up most of the risk, it shouldn’t be a surprise that farmers discount the chance of another drought and water shortage.

At the Environmental Working Group we’ve been sounding the alarm on these trends for years. Consider:
– According to our recent report, Plowed Under, nearly 24 million acres of U.S. grasslands, shrub land and wetlands were plowed under between 2008 and 2011. About 19 million of those acres have been planted to just three crops, corn, soybeans and winter wheat – some of the main building blocks in our industrial food system — due in part to federal policies like farm subsidies that support only a handful of commodity crops.
– In intensively-farmed Iowa, EWG found that Iowa State University researchers had determined that some Iowa farms are losing precious topsoil up to 12 times faster than the government estimates. When storms hit vulnerable or poorly protected land, fields sometimes lose more soil in a single day than is considered sustainable for the whole year, or even decades.
– The recent drought that ravaged most of the country’s farmland spurred a dust storm in October that stretched across Nebraska, Kansas and Oklahoma. It was so big that it could be seen from space. 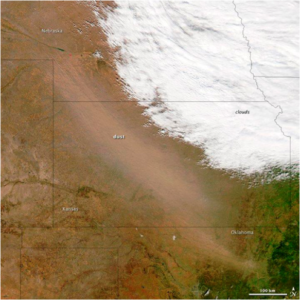 What stands between the United States and another environmental catastrophe that leaves millions of acres blowing in the wind is the Ogallala aquifer, which covers about 175,000 square miles. Geologic action created this reservoir more than a million years ago.

Like oil, this is fossil water that cannot be renewed once it is pumped out. Some 82 percent of the people living above the aquifer depend on it for clean drinking water. Stunningly, much of this precious and irreplaceable water is being used to grow corn to feed pigs and turkeys.

More worrisome, today nearly half the water is gone. According to the U.S. Department of Agriculture, it “is being depleted at an unsustainable rate.”

In Burns’ film, Charles Shaw of Cimarron County, Oklahoma, says, “The only thing holding that ground together is that irrigation water that comes out of the Ogallala…we only got about 20 years of water left.” 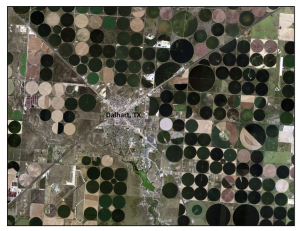 Circular crop fields dominate the landscape around Dalhart, Texas. a city at the center of the Dust Bowl. Each round field is irrigated using overhead pipes that pivot around the center of the circle, delivering water pumped from the Ogallala aquifer. (Source: 2010 Photo from the U.S. Department of Agriculture’s National Agricultural Imagery Program) .

Time to act is now

The enduring lesson of Burns’ film is that the time to engage in conservation practices is before the drought hits, not after. We must take urgent measures right now to make sure that the Dust Bowl doesn’t come back to haunt farmers and the rest of us.

Yet Congress is actually on track to pass a farm bill that cuts funding for conservation and guts the conservation compact between farmers and taxpayers that has protected soil from erosion since 1985. Previously, farmers were required to engage in conservation in exchange for taxpayer-funded subsidies. And before the current rush to plow and plant, farmers managing more than 140 million acres of land implemented practices that reduced by 40 percent the soil washing into streams from “highly erodible” lands.

Since field erosion and run-off are unregulated at the federal level, our only line of defense against erosion and water pollution is to fight attempts in the farm bill to slash cost-share funding for farmers implementing environmental practices.

Farmers want to do better by the soil, a fact illuminated by a 2010 Iowa Farm and Rural Life Poll that showed that two-thirds of Iowa farmers said they should be required to conserve soil on highly erodible cropland regardless of whether they participated in federal farm programs.

History doesn’t have to repeat itself, but only if we learn the hard lessons of the past. Ken Burns’ “The Dust Bowl” shows us that we ignore tried and true conservation practices at our peril.