A Meatless Celebration: Thanksgiving Without The Turkey | Civil Eats

A Meatless Celebration: Thanksgiving Without The Turkey 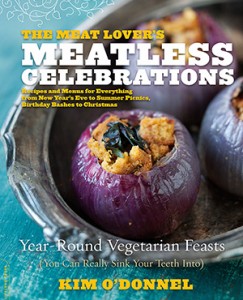 I’ve been a vegetarian since I was seven years old, which means that my choice to not eat meat has been a less conscious decision than some, due to the fact that it is so ingrained. I’d like to claim that my ethics and morals have resulted in a studious stance against meat-eating, but that would be overdramatizing the simple notion that it’s just easier for me to do what I’ve always done. Yes, I do agree with carrying a lighter load on the planet, and have sympathy for animals who are treated cruelly (my seven year old heart was sad when I made the link between the Big Mac I just ate and our neighborhood cows…hence becoming a vegetarian.), but ultimately for me, cooking without meat is way less of a messy hassle than learning to.

Kim O’Donnel, author of the brand new cookbook The Meat Lover’s Meatless Celebrations: Year-Round Vegetarian Feasts (You Can Really Sink Your Teeth Into), has come to eating less meat from the opposite direction than me. She was a devout omnivore who decided to scale back a bit, and in the process discovered how delicious vegetarian food can be. Her first book, The Meat Lover’s Meatless Cookbook: Vegetarian Recipes Carnivores Will Devour, was published in 2010 and presented fifty-two menus for folks in a similar position to sub into their lives, along the lines of adopting a “Meatless Monday” mentality. Since then, her recipes have continued to showcase flavorful, seasonal and satisfying ways all of us, meat eaters and not, can be more mindful in the kitchen.

The latest book offers an abundant selection of dishes geared toward celebrations, which is perfect for the time of year we find ourselves in right now. It is broken into the four seasons, each containing a variety of menus to suit almost every imaginable occasion. Each menu has an introduction that often contains a personal story or some background to the recipes, adding a warm personal touch to the cheerfully designed book. There are ideas for traditional holidays, like Thanksgiving, Christmas, Easter, Fourth of July. But then there are menus for less observed, more unique excuses to celebrate, like Diwali, Lunar New Year, Moveable Feast, or Preserving Party. Each season is coded by color, so when flipping through the book, you can easily find blue tabs for winter or pink for summer. Also, many of the recipes are perfect for several occasions, and can be found repeated on the menus. For example, the Lentil “Meatballs” served Swedish style for Election Night or as a sub sandwich for The Big Game. This means that if you master a recipe for one occasion, you can keep it in the back of your head for another later in the year.

This leads me to another admission, which is that I find it practically impossible to follow a recipe. After more than ten years cooking and baking both gainfully and not so much, I tend to follow instinct over written instructions. More often than not, a recipe will serve as a reference point which I then break off from and concoct something my own. This can result in spontaneous success, or iffy experimentations, and I’m well aware that I’m at fault for those inconsistencies. But even for someone who throws caution to the wind in the kitchen, I find myself cooking in a rut, relying on a handful of ideas that get repeated over and over. And so, with the Thanksgiving day countdown in full force, and the opportunity to preview this cookbook (also a chance to shake things up a bit and bring new breath to some standards), I decided to test my focus and diligence with a couple of her recipes for the holiday table.

This year, I’m in charge of the sweet potatoes. I usually whip up some sort of brown sugar or maple glazed, buttery and sticky baked thing…delicious, yes, but hardly a health conscious addition to the starch laden Thanksgiving menu. So I decided to switch gears and tackle O’Donnel’s Sweet Potato Pesto Gratin. The seasonal pesto is made from lacinato kale, blended (tip: use a food processor for more integrated blending and easier cleanup as opposed to a blender) up with garlic, walnuts, olive oil and the option of Parmigiano-Reggiano cheese (I opted in). It is then mixed into thinly sliced rounds of peeled sweet potatoes and baked until tender. The format of the recipe is easy to read and follow (even for me who had to buckle down and resist all substitution temptation) with a sidebar of good-to-know kitchen notes, clarifying things that might be questioned during the cooking process. The end result is visually impressive-bright orange and emerald green- and will surely be a big hit later today when we dig in.

If it wasn’t for the fact that I already had a round of pie dough in the fridge for my pumpkin pie this year, I would have definitely tried out the Enlightened Pie Dough recipe, utilizing a combination of butter and olive oil and a hot water (gasp!) method. Instead, I chose to concoct a treat to take along for dessert to another gathering this weekend, and will certainly be revisiting as the holiday season progresses. The Chocolate Bark is not only beautiful to look at, combining dark chocolate, nuts, dried fruit and crystallized ginger with a kiss of salt, it is impressive to give as an edible present (generally the kind that I tend to give) and extremely easy to mix up.

My only complaint about Meatless Celebrations is that there aren’t more photos of the finished product. I really like having a visual clue as to what the finished product should look like. But other than that, this book offers so many exciting ideas that I can’t wait to try out: Lightened-Up Old-School Onion Dip, the Black-Eyed Pea Paella, Southern-Fried Chick…Pea, Quinoa-Walnut Brownies.

So happy Thanksgiving everyone! Let’s all take a moment today, while cooking, chopping, baking, eating, to appreciate the food in front of you and its origins. Maybe next year, with the help of books like Meatless Celebrations, your table might hold a little bit less weight.