Improve Working Conditions in the Food System with Immigration Reform 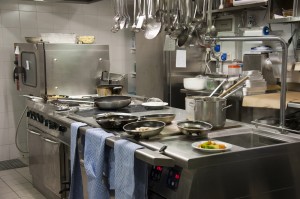 Following the election, millions across the nation are breathing a huge sigh of relief (or maybe crying, depending on where you fall politically). And while my friends and I celebrated over wine, cheese, and grapes, I wondered what Obama’s victory foods were. Everyone has a favorite restaurant to celebrate at in his or her hometown. Mine is Trang, a Vietnamese restaurant with an incredible vegan mock-pork in a mild yellow curry that I still crave.

One birthday of mine, I recall sneaking a view of the staff as they cooked our lunch. An older woman stood out in particular–short, with long, grey-streaked hair pulled back into a bun, standing over a large commercial-sized pot. The woman made me think of my own abuelita (grandmother), and I romanticized the notion of Vietnamese grandmothers making savory Pho with care.

But what if that woman who made my lunch that day was the grandmother of another family, not the family she worked for?  And what if the restaurant I loved so much left this woman, or others on their staff unpaid?  Would she have been able to complain to someone, found a way to get what she was owed?  Or would she have gone without electricity and eaten only rice for a spell? I hadn’t imagined it that way.

Today, I work at Workers Defense Project (WDP), an immigrant workers rights organization based in Austin, Texas, where we receive up to ten calls a day from workers in desperate situations just like this.  They build our offices, care for our children, and cook our food, often going underpaid, unpaid or worse.

In a study published by the Food Chain Workers Alliance (FCWA) this year, 86 percent of workers in the food chain reported earning low or poverty wages.  The same study cites that 79 percent don’t have paid sick days, or don’t know if they do, and over 1/3 of study participants had suffered from wage theft within one week of the time of their participation.  Of the workers who suffered wage theft, 62 percent were Latino or Asian.

And labor abuse isn’t something specific to the restaurant industry. The Coalition of Immokalee Workers (CIW) has a 20+ year history (and some amazing victories) struggling against poverty wages and violence suffered by workers in our agricultural industry–an industry peopled by a largely immigrant workforce.  So why are immigrants consistently exploited across the food system?  Would working towards comprehensive immigration reform help?

To be sure, we can’t prove that if workers who typically fill these crucial food system jobs had access to a full menu of civil and labor rights that it would guarantee to raise the industry employment standards. Throughout eight years of doing this work, I’ve heard a slew of reasons why these abuses happen.  Stories range from employers who feel they don’t have to pay undocumented workers and threaten to report to immigration if they complain, to the dehumanizing rationale that farmworkers are nothing but a replaceable piece of machinery. Worker fear couples with the irrational logic of abusive employers to create a toxic situation of silence. And in that silence, employers suffer no penalty, allowing the exploitation to continue.

Clearly, the endemic exploitation of food industry workers is directly related to fear.  But imagine this: when I take a call from a woman who wasn’t paid, complained, and then was fired, her voice won’t be filled with tears.  She won’t fear deportation and being torn away from her children. She will know that she’ll be able to pay her landlord at the end of the month and keep her newborn warm as the temperature drops this winter. She’ll just be calling me to ask for a phone number, and to ensure she files the right paperwork to report and resolve the problem.

Immigrant workers being guaranteed access to the basic civil protections that documentation provides might not change conditions in the industry on its own–but those workers would be able to live with less fear.  Pair that with the cutting-edge community organizing work of groups like the CIW and the Restaurant Opportunities Center to support the creation of dignified, family-sustaining jobs in the food system.  In a context where workers have basic civil protections, the work of these organizations could have an even greater impact.

With comprehensive immigration reform in place, the people who bus our tables and pick our apples will not only be able to vote and have access to basic social services. They can stop living in fear of their employers and of the police. They might one day also afford to feed their families the food they serve us, and purchase the produce we all want on our tables. Sustainable food advocates can help make this possible.

Many of us know that democracy doesn’t end at the ballot box. We recognize that it is going to take some real work in order to make it possible for everyone to have the kind of fresh, healthy, affordable, fair food we want. This work started long before the election season and must be sustained beyond it. We need concrete ways to support immigrant workers in the food system and make it possible for their families to eat as ours do, and ‘voting with our dollars’ won’t be enough.

We can educate ourselves more on the issues faced by all workers in the food system and follow the work of organizations like the CIW, ROC, and FCWA.  We can push locally-elected representatives to repeal oppressive policies like Secure Communities, which require local police departments to report to ICE officials on who they have detained, ultimately leading to mass deportations of people across the nation for minor things like traffic offenses. We can push the Obama administration on immigration reform. Finally, and most importantly, sustainable food advocates can work to change the conversation within our circles–bringing this and other issues that workers in the food system face into the dialogue about what a sustainable food future looks like for all of us.