GMO Labeling or No, A Movement Comes of Age | Civil Eats

GMO Labeling or No, A Movement Comes of Age 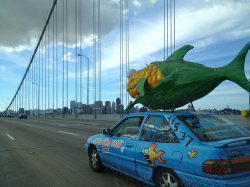 If Proposition 37, California’s GMO labeling measure, gets voted down today, it will be unfortunate and frustrating for many. But it won’t happen for lack of a movement.

Last month, in a much-quoted New York Times Magazine article, Michael Pollan framed this state-level ballot initiative as an important test with national implications. If we can translate the growing consumer awareness about the value of organic and local food into a movement with real political will, he argued, then surely this ballot initiative was a reason to pull out the stops and push this burgeoning movement to its limit.

While Pollan didn’t exactly say that a loss for GMO labeling advocates in California would prove the opposite—that there is no movement afoot—I have no doubt that some heard it that way. Of course, whenever you set up rhetorical polarization for the sake of motivating a group, there is always the potential for weighty, motivation-killing loss on the other side of the coin.

But over the last few months we have seen grassroots forces standing up to big corporate dollars with a very clear goal (something we can’t say for the Occupy movement, despite its numbers). And that won’t be easy to dismiss—regardless of the final vote on Prop 37.

Pollan ostensibly asked: “What food movement?” And an impressive number of Californians—including nearly 1,300 chefs; 2,000 farms in California and several from out of the state; a growing list of scientists, including at least one geneticist; the state’s most high-profile farmers market; a well-respected senator; and a decent segment of Hollywood said: “This one!”

Meanwhile, the corporations funding the No on 37 campaign—mainly pesticide companies such as Monsanto and Dow and processed food and beverage makers like PepsiCo—have funneled $45 million, or five times what the Yes on 37 campaign has had to spend, into television ads and mailers. Their relentless message? That labeling would raise food prices and cause farmers to suffer. (Prop 37 opponents’ latest tactic is especially suspect: They’re distributing voting guides from faux-green and faux-Democrat groups that place a “no on 37” vote on a roster of otherwise progressive choices.)

In other words, the opponents have poured enough cash into the fight to turn even many educated, left-leaning, farmers-market-shopping voters against the ballot measure. So the real question is: Could any real grassroots movement (and no, the Tea Party doesn’t count) possibly beat those kinds of odds?

As of yesterday, most news outlets, including Reuters, were making it look unlikely, as the dollars spent have had a predictable, inverse relationship to polling numbers. From Reuters:

Four weeks ago, the labeling initiative was supported by more than two-thirds of Californians who said they intended to vote on Nov. 6, according to a poll from the California Business Roundtable and Pepperdine University’s School of Public Policy. On Tuesday, their latest poll showed support had plummeted to 39 percent, while opposition had surged to almost 51 percent. 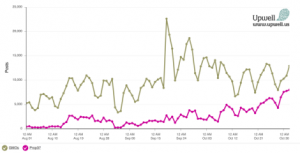 In nothing else, the whole effort has put the issue on many more people’s radars than ever before. For instance, the graphic at right shows online social mentions for the key words “GMO” and  “Prop 37″ as recorded by the social media group Upwell from Aug. 1 to Nov. 1, 2012.

And it is possible that proponents of the bill—who have made an especially strong showing over social media channels thanks to efforts like tech investor Ali Partovi’s homemade video and its crowd-funded promotion on Facebook—will pull through with a last-minute victory. After all, polls aren’t always accurate, and there may be a portion of the electorate who will step behind the curtain, read the actual language of the bill, and think to themselves: “How could more transparency about the food we eat be a bad thing?”

If none of that happens and Monsanto takes the day, it won’t be because there’s not a bona fide movement gathering steam. On the contrary, I’d say the good food movement—awkward adolescent that it is—may have just had a taste of its first stiff drink.