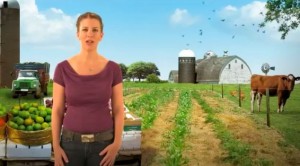 A seventh of the world’s population experiences hunger every day. There are two ways people have argued to solve this problem: intensify agriculture using industrial practices which have not proven themselves over the long term, or diversify agriculture using methods that have sustained us over thousands of years. Big chemical and seed companies–which have made millions in the last half-century–would like us to keep following the former model, while more and more people are voting with their forks for the latter.

Now, the Real Food Media Project, a collaboration between author Anna Lappé and Corporate Accountability International, has debuted Food MythBusters, a campaign to provide videos and resources debunking the yarns Big Ag players spin about our food system–beginning with their myth about how we should feed the world.