All Together Now: World Food Day 2012 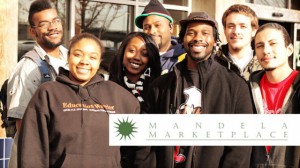 One in seven people around the world will feel hunger today. The Food and Agriculture Organization of the United Nations (FAO) brings global awareness to this issue every year on October 16th, and have done so since 1981. Today, there are more than 100 countries that will celebrate World Food Day. Over 450 national and private organizations in the U.S., such as Oxfam America and Ending Hunger, will host events around this year’s theme, “Agricultural cooperatives–key to feeding the world,” to bring better understanding around what cooperatives are and how they help relieve food insecurity and improve community self-sufficiency.

Agricultural cooperatives are enterprises owned and democratically operated by the employees that work there. They range from farming to retail coops that pool together resources and share in the costs and benefits of running a business. “There are many examples of co-ops and they take away the hierarchies that make it difficult to create a quality of life,” says Madeleine Van Engel, a baker-owner at Arizmendi, a cooperative bakery in the San Francisco Bay Area. Many examples of agricultural cooperatives in the U.S. not only feed their community, but also create economic and social sustainability in places often deemed unlikely.

Mandela Marketplace, a West Oakland non-profit, worked within their predominantly African-American and Latino community to identify ways to improve livelihoods and to create neighborhood investment. Together, they wanted to address the poor health statistics, where obesity rates are three times higher than the national average and where forty-eight liquor stores and zero grocery stores attempt to feed around 25,000 people. As a result, the Mandela Foods Cooperative opened its doors in 2009 as a worker-owned community market selling healthy food at an affordable price.

Mariela Cedeno, Senior Manager at Mandela Marketplace, describes the cooperative as community driven. More than forty percent of the produce sold at the cooperative comes from small farmers within a 200-mile radius, most of them minority farmers. They also employ community members, like Leroy Musgraves, a retired African-American farmer who hosts nutrition education sessions in front of the cooperative twice a week.

Three years later, Mandela Foods Cooperative is improving food security and the community marketplace in West Oakland. Ms. Cedeno says that, “being a cooperative means that everyone gets value out of the business and everyone is engaged in its mission to increase access to healthy food and increase the community’s wealth, they are equally invested in economic development and food.” Since the success of Mandela Foods Cooperative, the community of West Oakland and Mandela Marketplace has organized a produce delivery service that works with community youth to stock the shelves of corner stores with fresh produce.

The Toolbox for Education and Social Action lists 10 reasons why cooperatives work, starting with democracy and ending with viability. The FAO estimates that one billion people are members of cooperatives worldwide and they are generating more than 100 million jobs. The way we think about agriculture and food businesses is moving away from the trailblazing farmer tasked with feeding the world and moving closer towards business models that share resources, ideas, and finances. The National Council of Farmer Cooperatives found that “cooperatives account for nearly $654 billion in revenue, over two million jobs, $75 billion in wages and benefits paid, and a total of $133.5 billion in value-added income.”

World Food Day invites us all to take action and join the conversations. Many community-based organizations, agricultural cooperatives, and community leaders will host dinners, organize food packaging events, arrange food drives, plan community gardening events, and engage schools and institutions. There are also several national and international conferences and workshops taking place around the world that you can tune into. This year’s World Food Day conference will be hosted by Gorta in Dublin and will stream live on today at 9am here. You can find out more about agricultural cooperatives and how you can get involved in your community to end world hunger one dinner at a time here.