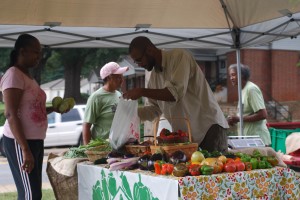 Much like the rest of the country, community gardens in Athens, Georgia sprouted up everywhere in the last decade, some with iffy hopes of survival.

Successes here include: a beautiful edible landscape around a resource center for the elderly; an abandoned lot in an African American neighborhood where a grey-haired gardener scares off drug dealers with collard plants; and a resident-run garden in a hip neighborhood where homemade tomato cages poke up on public land.

In one low-income Hispanic neighborhood in a culturally segregated trailer park outside of town, a garden put in place by horticulture student volunteers from the University of Georgia didn’t fare as well, at least in its first seasons. As a newspaper reporter and farming enthusiast, I watched this garden’s early growth with both hope and worry. Many of my friends who lived in this mobile home park had worked hard to drum up awareness of it in the neighborhood, and initial interest looked promising.

Thing is, community gardens in low-income, working poor neighborhoods face a major battle: The community works all the time. As one community garden advocate put it to me recently, it’s hard for working people to justify extra labor for what might be very little return.

But a new urban farm in a vacant schoolyard in a predominantly black neighborhood called the West Broad Market Garden has me, and many in the city, quite hopeful about the future of urban agriculture in Athens.

West Broad Elementary taught a few generations of African Americans in Athens, and many of its graduates still live in the homes that surround it. Years ago it became an academy for children with behavioral problems that eventually abandoned the building for cleaner, healthier environs. For three years the school sat empty until a backhoe showed up this past March to dig up an old baseball field and basketball court. (Full disclosure: I’ve lived in this neighborhood for five years.)

Now rows of pepper plants, tomatoes and towering sunflowers create a bounty that the folks working the land sell at bi-weekly farmers markets, restaurants and organic grocers around town.

The market garden is the newest member of a community garden network, which includes some of the gardens mentioned earlier, started in 2010 with a USDA grant. With the federal money, the nonprofit that administers the grant, the Athens Land Trust, hired two employees to oversee all of its urban agriculture efforts in Athens.

The new urban farm is more than visually impressive; there’s something more promising here. I asked Fenwick Broyard, the community garden network coordinator, why the market garden has earned such interest and shows such potential.

“The fact that there is an economic benefit to the project” makes it more enticing to the neighborhood it serves, he said. Anyone who commits five to 15 hours a week on the farm earns a share of the profits. Initially, Broyard said they planned a scaled payment system based on hours worked, but they’ve just been splitting the money. In less than two months of markets, the farm earned more than $2,000 that’s gone directly to the neighbors who’ve done the work, not Broyard or the project manager, Dana Blanton.

Profits are set to increase, Broyard said. A CSA is planned for this fall, which he expects to earn another $7,000. Broyard is quickly diversifying not only the income streams for the market, but the stakeholders in it as well. By the time that initial grant money runs out, Broyard hopes that the market garden is financially sustainable, perhaps looking to private donors instead of a federal grant.

“We’ve discovered that there is no way to make this project sustainable by marketing just to this neighborhood,” Broyard said. In the early weeks of market season at West Broad, crowds represent two distinct sides of Athens: white university affiliates and low-income African Americans. Academics stopping by on their way home to cook an organic dinner rub elbows with the market’s nearest neighbors. Athens’ racial division confounds Broyard’s multicultural New Orleans upbringing. As he set out to pitch the idea to the community, he couldn’t help but notice racial divisions among the church congregations he visited. But he doesn’t feel daunted.

Broyard said the market provides an opportunity to bridge those two worlds. He believes in its ability to mix all ages and races if given the chance. He’s seen it already.

Others have seen it as well. Michael Thurmond, Georgia’s former Labor Commissioner and an author of local slave history, lived through the desegregation of Athens’ schools years after the federal mandate to do so. When he visited the market garden, Thurmond, the son of a farmer who I’ve heard tell tales of biking produce into town, remarked at the broad mix of Athenians who had come out to support the project.

“What’s so impressive about this afternoon is not the garden, not the food, but that it’s brought Athens together,” my colleague quoted Thurmond saying during his garden visit. “All races, colors, creeds and genders have come here today, and it shows you that when we work together, we can transform barren land into prosperous land.”

Still, as fall begins, the core farm team hasn’t grown past the current five members: Broyard, Blanton, and three nearby residents including Ethel Collins, a 77-year-old retired university food service worker who prepares all the meals at her small church just two blocks away.

When I asked Collins why she threw her energies into the project, she responded, “It enlightens the neighborhood…gives us some good ideas of what life is about.”

André Gallant is a reporter at the Athens (Ga.) Banner-Herald covering arts, urban agriculture, food, restaurants and a celebrity chef. Find him on Twitter: @andregallant. And at www.foodandartsreporter.com. Read more >