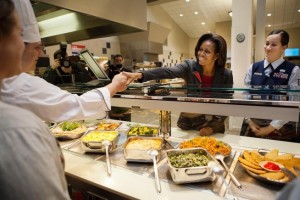 In the latest investigation by the Food & Environment Reporting Network (FERN), reporter Bridget Huber examines first lady Michelle Obama’s anti-obesity campaign and the political realities of taking on the multibillion-dollar food industry. The story, “Michelle’s Moves,” appears online at The Nation and FERN.

Huber details how, starting in March 2010, Mrs. Obama—the enormously popular mother in chief, who had surprised and impressed many when she chose to make the contentious issue of childhood obesity a focus of her White House tenure—leveled a challenge at the food industry’s biggest players, asking them to “step up,” a month after she launched the Let’s Move campaign, the Obama administration’s flagship anti-obesity program, aimed at reversing the childhood obesity epidemic by 2030.

“But three and a half years since the ground was broken on the White House garden, many of those who’d had high hopes say the first lady has logged only modest successes,” Huber reports. “Experts credit Mrs. Obama for her instrumental role in reforming school lunches, limiting TV watching and increasing healthy food at childcare centers—and, perhaps most important, using her bully pulpit to bring issues of food and nutrition to national attention. But, they say, reversing the childhood obesity epidemic in a generation requires more of the bold action that Mrs. Obama hinted at.”

Huber examines whether the administration’s strategy appears to have shifted and forged controversial—some say compromising—partnerships with food manufacturers, writing: “Observers put the blame less on a lack of goodwill than on the political realities of taking on the multibillion-dollar food industry, which has lots of lobbying money and friends in Congress and no qualms about fanning the fears of government overreach when it perceives a threat to its interests…. It also raises fundamental questions about whether the goals of public health and those of the food industry are at irreconcilable odds. Should those who seek to address the obesity crisis treat food companies as collaborators or as adversaries?”

She speaks to food policy and obesity experts, including Marion Nestle, professor of nutrition, public health and food studies at New York University; Kelly Brownell, director of the Rudd Center for Food Policy and Obesity at Yale University; and Margo Wootan, nutrition policy director at the Center for Science in the Public Interest (CSPI), all of whom have tracked Mrs. Obama’s efforts, including those to reform school lunch. The story also takes a hard look at the first lady’s controversial alliance with Walmart and its efforts to cut prices on healthy foods, reduce the sodium and sugar in packaged foods, and open stores in “food deserts”—neighborhoods lacking fresh grocery retailers.

The story highlights the particularly contentious politics of restricting junk-food advertising to kids, which the Institute of Medicine says contributes to obesity, and investigates the nature of setting industry standards—which set off a lobbying and spending frenzy that Huber reports convinced nearly a third of the Senate and 40 percent of the House to write letters to federal agencies criticizing the proposed rules—and the efficacy of public-private partnerships with the food industry.

“The trajectory of Let’s Move has left many of those initially optimistic about the program feeling doubtful that it will accomplish much more: the best of intentions appear to be mired in the unhappy realities of American politics,” Huber writes, noting Mrs. Obama’s leadership and persuasion has helped bring the issue to the forefront. She concludes, “But her sole authority is moral authority. While she’s brought tremendous attention to obesity and healthy living, she doesn’t have the power to make the regulatory changes that public health experts say are key.”