Faces and Visions of the Food Movement: Denise O’Brien 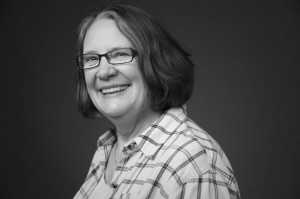 Denise O’Brien is a farmer and community organizer from Atlantic, Iowa. She has farmed with her husband, Larry Harris, for 37 years in the southwest of the state and maintains 16 acres of fruit and vegetable production. Denise also raises turkeys and chickens for market.

For over 30 years Denise has helped develop agriculture policy on the state, national and international level working specifically on local food systems and conservation issues. She is the founder of Women Food and Agriculture Network and recently returned home after a year working as an USDA agriculture adviser in Afghanistan.

Denise has spent years as an activist farmer, raising children and crops, milking cows and being politically engaged. Now, she wants to restore prairie, save seeds, support women landowners and encourage the next generation of women activists.

I’ve been an organic farmer now for 37 years. My whole focus for almost all those years has been dreaming about a better world and better agriculture. I didn’t grow up a farmer; I married one. There was something in me that was drawn to working the land. I was born with genes or something that steered me towards farming. For the years I’ve farmed it’s been about taking care of mother earth and leaving her in better condition. I’ve learned most everything about farming from my husband and during the time of learning I was always drawn towards the fact that women don’t take credit for what they do in a farming situation. I’m talking about the older generation of women who were raised on farms and know all about farming like men but always defer to the man and say they are just a “farmer’s wife.”

So my focus, while it’s been organics and local food, always comes around to women’s role on a local, state and international level. If women had a seat at the agriculture decision making table, the landscape would look differently.

There’s been an emerging issue of women’s land ownership. In the Midwest they own at least 50 percent of the land, most of that is rentable farmland. Who makes the decisions? So we started helping women dream about what to do with their land.

To encourage women to talk about their ties to the land in a setting where men aren’t always included. There is a real need for that. Internationally 55-95 percent of the world’s food is grown by women. I wanted to dig in and see what women are doing because they are underrepresented; much more involved than what they get credit for, especially in the US. I’ve always been about quality and equity. I’m one of those people who looks at organization’s Boards of Directors or corporations or non-profits to see what percentage are women and it’s consistently negligible.

That the landscape changes. Women would take responsibility for the assets they own, the farmland, and make decisions based on their own dreams. Women want natural resource and conservation management and families on their land. If women’s voices were heard we’d have a different landscape; buffer zones, there would be less soil loss, more families on the land. Here in the Midwest where industrial agriculture rules, I keep thinking “wow, this would just look so different if women were in charge.”

I just got done reading are Gathering by Diane Wheelie who started Seed Savers with her husband. It was really inspiring. We come from the same generation and have had similar experiences. Another book is The Dirty Life: On Farming, Food,and Love written from the point of view of an urban women who falls in love a farmer and takes a journey with him.

As a consequence of reading those books I’ve focused in on what I want to do with the rest of my life. I’ll be 63 soon and have had the great privilege to be a farmer. I want to finish my life out with a dedication to women in agriculture, restoring prairie and seed saving.

I’m real isolated in my physical community and what draws me is that I grew up here. There’s a generation of people that I really admire. My broader community of women activists moves me. Joan Gusow has been amazing for food and nutrition guidance. Women like Kathy Ozer, Executive Director of the National Family Farm Coalition. She has worked diligently for years with unbelievable dedication to family farmers. Local women, women in Iowa, that have meant a lot to me, like Mary Swallow Holmes with conservation, Jean Eels a county soil commissioner, Laura Krouse and Susan Jutz who are single women farmers. The people most endearing to me are in my mother-in-law’s generation; they worked tirelessly with no recognition. I look at them with them with respect and admiration.

To write a book. I feel responsible to tell my story because it’s been a pretty incredible life. Through all of these years of activism I have raised children and crops, milked cows and have been politically engaged. I’ve been privileged to travel the world; I’ve been in the presence of Presidents and celebrities and I feel strongly that we can grab life by its fullness. My commitment is to pass that on to younger women who are farming or food processing or even my daughters who didn’t stay on the farm but are interested in cooking, eating and having good food.

To encourage and be the cheerleader for future generations of girls and women activists; not to ignore the boys and men, but they have a leg up and they were born with that. You have to stand up for what you believe in and you can’t expect the world to change without your one’s own effort.

On my farm: to build a high tunnel to grow crops to market. To restore prairie; ninety-eight percent of Iowa was prairie but now it’s more like two percent. To write this book to engage women starting out and that need encouragement. To draw out those women who own the land now and to encourage them to make decisions about the legacy of their land. Finally, to impact change in the monoculture of corn and soybeans. To change the landscape of my state to a more regenerative caring for the land.

A physical change in the landscape. If you took an aerial flight, the land would be greener than it is now. Cover corps would be on the land, we would lose less soil due to erosion. There would be animals on the land where they should be not in buildings isolated from their natural place. The image we get of agriculture as we grow up with the barn, the farmer, it would be that image mixed with farmer Jane and equality; contemporary ideas and progressive issues attached.

The outreach is to the consumer and to those who are interested in raising a nation of healthy, smart children. All people should have access to good, nutritious food. There needs to be policy change to make permanent change. Policy plays a role in all of this. We need to run for political office or support those who are willing to run to make the change.

Awareness needs to be built. People have to take on an active role in changing policy, having local food policy councils, and living the change you want. It is not to our benefit to concentrate our work as individuals–we must work in community. The power needs to be taken away from the monied people and corporations who have strongly influenced laws in their favor. This is not an easy task.

Navigating the Waters: Women, Food,and Agriculture Network has received funding to do work with women on water and wetland issues. I will facilitate some meetings looking at watersheds.

Another WFAN project is Women Caring for the Land. This is the empowerment work with women landowners.

Pesticide Action Network. I’ve recently joined the Board. PAN can help bring life to another vision; having teams of people monitoring the air and water where we live since industrial agriculture has become king. Gathering scientific evidence that can help us understand how chemical agriculture affects our health.

Pesticide Action Network does impressive stuff. I always have my eye on the beginning farmer work that many organizations are initiating. The Greenhorns are wonderful; Severin and the crew of young upstarts are out there doing great innovative work. Dave Murphy and Lisa Stokes continue to needle people with Food Democracy Now and the Occupy movement.

Almost everything that interests me is in how we can revitalize and regenerate the degradation that’s happened to our land.

In the 1990s when we started work on local food and organics we asked ourselves is this a trend, or a fad or is this for real? Now it’s mainstream in many ways even in Iowa. But we have to be ever vigilant of cooptation There are many, not enough yet, attacking the corporate domination of agriculture. Corporate ag is fighting back. They continue to portray farming with the pastoral images we grow up with. The fantasy of farming. Corporations own Congress so they just pay for influence. We need to continue working on good food, healthy soil, healthy kids and we’ll have to do work on all fronts, policy, raising awareness, and farming. In all the 30 years I’ve been involved someone is always trying to co-opt what we’re doing because we’re on the right path. It’s about justice! We have to bring the truth to light!

The bottom line is we have to have good funding so people can lead organizations. People like myself need to pass on our historical perspective our institutional knowledge. Those of us who hold the history need to communicate it to people who are taking over the movement and be open to new ideas and ways of doing things. The “elders” of the food movement need to step back and encourage new leadership. We have to understand that things change and are being done in different ways as new leaders and greater diversity enters the scene. We don’t need to exit but be there as mentors and advisors. Let things happen as they may. The movement is just a toddler.

I would like the vegetables that are growing in the garden in the Midwest summer as we transition into Fall. A simple garden meal, eating things just as they are, a nice mix of fruits and vegetables fresh out of my garden.