Interview with a Young Farmer 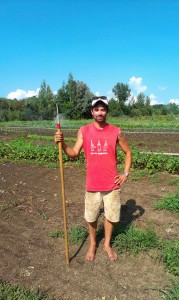 The University of Vermont’s Farmer Training Program, introduced in May 2011, is an intensive six-month program that aims to provide graduates with an education and support system that encourages them to create and maintain sustainable farms and food businesses. What distinguishes the program from typical farm apprenticeships, in addition to the application fee for enrollment, is the comprehensive exposure to different types of sustainable food industries in the food system, from a stint on a 500-member CSA farm to working for a smaller, specialty grower.

Civil Eats spoke to Robinson Yost, one of the current students in the program. After studying anti-colonial politics as an undergraduate student, he studied ecological building methods in New Mexico and participated in a reforestation project and low-impact living experiment in Southeast India. As a young farmer, Robinson is a telling example of the sort of unconventional backgrounds that many young farmers are bringing into the American food system.

Why did you join the UVM program?

When I got back from the reforestation project [I participated in] in India I followed through on a dream I had for a while, which was to go to the sea and work on ships. I did that for about four years. It was somewhat unsustainable for my life, a very transient existence. But one of the great things about being at sea is a close connection and communion with the natural world. I also found this in the agricultural world. I’m attracted to systems. As an engineer, I found it a really exciting challenge to learn about these different mechanical systems and try to figure them out. And I found a parallel in the agricultural system–learning about the life cycle of different plants and learning about all of the other agricultural systems that we put in place–engineering systems that harness natural energy.

What is important to you about farming?

It resonates with me on a lot of different levels. The thing that originally got me into it which got me excited is this idea that food is the basis of everything that we do. In school I was doing a lot of work in terms of studying colonial histories and anti-colonial movements. I was looking at different ideas about social change and revolutionary ideas, and the solution I came to is that it all boiled down to food and food production. It all circles around this idea of how we are producing food, how are we feeding ourselves. That’s what keeps me excited about it. It could be a really transformative revolutionary thing that we could do in society. And on a day-to-day level, it’s working with my hands, being outside all day. And of course taking home fresh organic vegetables.

As a young farmer–a minority in the American agricultural system in which the average age of farmers is 57–what obstacles have you faced or anticipate in the coming years?

The conventional farmers are older men and pretty much getting out of the game. There’s not really another generation that is succeeding them. Their kids are not interested in the farm business. And the other demographic is young farmers who are not coming from an agricultural background, but who are interested in getting back to agricultural practices and looking at small-scale local farms, diversified vegetable farms instead of commodity crops. The older generation will move on and there is a huge wealth of knowledge which will hopefully get passed on. But there’s also an opportunity for younger farmers there. The challenges are huge. The system is gamed so that if you’re young, the deck is stacked against you. So the one thing that’s kind of working with us is that a lot of people and consumers are gaining consciousness about this. There is a big market-driven push towards smaller scale and sustainable agriculture.

What do you plan to do with this degree?

My focus within the program has been urban agriculture and urban food systems. I will hopefully start graduate studies in urban planning. I’m at this point a little more interested in the policy side and thinking about possibilities for what we could be doing in cities. Creating food access for people who don’t have it. Making urban spaces into agricultural spaces. How do we reincorporate waste? Let’s figure out how we can close that circle.

What do you see as the future of American agriculture?

Growing food yourself and taking control of the food system that will be providing for you. I would love to see more local food, more awareness of how that food is produced amongst consumers, more context among producers and consumers. Friday night I was driving from Burlington to Manchester. I was passing all these big cow barns they were all lit up with fluorescent lights. I asked why and was told that the lights stimulate milk production. If it’s always daytime, the cows’ bodies are sensing that and they want to produce more milk. And that just really creeped me out. We are meddling, manipulating the system in disgusting ways. So my vision for the future of American agriculture is a system that people are in contact with and that they can see. If people know what is going on then they’ll make more responsible decisions about what they put into their bodies.

What is your favorite farm task?

I used to hate weeding. Growing up my mom was a big gardener and she always wanted me to help her and I thought it was the most pointless thing ever. But working on a farm, you just have to do it. So first I begrudgingly got back into weeding and now I actually really like it. It’s kind of a zen thing for me. There’s something very meditative about hand weeding the different crops, so close to the earth.

Arielle Golden is focusing on young farmer stories for Civil Eats. She graduated in 2010 from Wesleyan University and spent the following year living in India, working on issues of food security for women and children. Her projects included a report encouraging government supplemental food programs to take local economies and cultural appropriateness into account. She returned to the U.S. with a reinvigorated sense of hope about fixing our national food system. Arielle has written for the Nourishing the Planet project at the Worldwatch Institute and Global Circle, and loves crafting, cooking for pleasure, being outside, and braving new adventures. Follow her on Twitter: @airgolden0. Read more >