Food Mythbusters: Coming to a City Near You on Food Day, October 24th | Civil Eats

Food Mythbusters: Coming to a City Near You on Food Day, October 24th 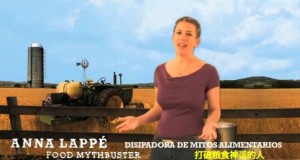 It’s a tired old refrain you’ve probably heard before: “Industrial agriculture is the only way to feed the world.” Even if you shop at your weekly farmers market, and love your local kale and carrots, maybe you also secretly worry: Are you cursing people to more hunger around the world for your organic proclivities?

Well, folks, the research is in. Study after study is showing the opposite is true: we can only ensure a well-fed world if we start shifting away from an agricultural system dependent on fossil fuels, mined minerals, and lots of water—all of which will only get more costly as they run out. Some of the most esteemed global institutions have documented that the best way to fight hunger—and grow food abundantly—is to go for organic and ecological production methods and get people eating whole, real food again.

So if we have scientific consensus, why don’t we have more public consciousness? You can find the answer in the marketing budgets of Big Ag. Thanks to well-funded, multi-decade communications campaigns by the very corporations profiting from chemical agriculture, many of us are still in the dark about the true costs of industrial agriculture and the true potential of sustainable agriculture.

Thanks to these efforts, we are inundated with messaging that we need their products—chemicals, fertilizer, genetically engineered seeds—to ensure the world is fed. We hear it all the time.

We hear the grain trader, ADM, is supermarket to the world—while the company’s price-fixing scandals were so outrageous they became fodder for a Matt Damon, Hollywood film.

We hear pharmaceutical behemoth, Bayer, is “helping to feed a hungry planet” while at the same time it’s one of the biggest distributors of antibiotics to the livestock industry, leading to a public health crisis of antibiotic resistance. And it’s the maker of a toxic pesticide, now covering nearly 90 percent of all U.S. corn seeds, and a likely culprit in  colony collapse disorder—the fancy name for the disappearance of bees. It doesn’t take a PhD in agronomy to know that pollinators like bees are an essential part of being able to feed the world.

I don’t know about you, but I’m increasingly frustrated by all this spin: by the ad campaigns, the trade-group public relations machines, the lobbying, the front groups—the myth-making. And, while I don’t have $817 million (that’s what Monsanto spent on advertising in just one year), I do have some powerful allies—great food, farming and labor groups who share my frustration and want to do something about it. So together, we’re launching Food MythBusters: a one-stop shop to get your burning questions about food answered through short films, Q&As with experts and links to essential research.

Our first film takes on the myth that we need industrial agriculture to feed the world. We’re offering sneak peeks at SXSW Eco in Austin and with partners in Baltimore, Philadelphia, and Boston and culminating with a national launch on Food Day, October 24th.

We’re inviting you–yes you–to help join us in spreading the word about the potential for sustainable food, farming and the exciting work springing to life across the country to remake our food system. This will ensure more and more of us have access to good, healthy, sustainably raised food.

Please join us by screening our first film wherever you are—on college campuses, in church basements, at CSA pickups and family rooms. We hope screenings will stimulate conversation, educate more about the real story of our food and compel people to get involved in transforming our food system—in their communities and across the country.

Visit www.foodmyths.org to see a teaser trailer and download a step-by-step toolkit for organizing a screening—it’s not too late. Contact JGordon@StopCorporateAbuse.org if you’d like more information about how to join the many groups around the country hosting a screening on Food Day, or any day this fall. Together, we can take back the story of our food from the marketing machine of Big Agriculture.