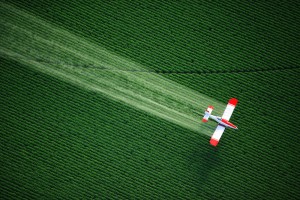 As a scientist at Pesticide Action Network, I am frequently asked these days to explain what genetically engineered (GE) crops have to do with pesticides. When I answer that GE crops both contain and drive up pesticide use, I am often met with earnest incredulity. We seem to need to believe that GE technology is the best thing since sliced bread.

On a radio program just last week, a caller voiced his genuine hopes to me that GE crops would provide a green solution to the woes of the world since he’d heard that these crops increase yield, cure blindness and reduce pesticide use. I was sorry to have to disappoint him on all counts, since GE crops have consistently failed to improve yield, have done nothing to date for Vitamin A deficiency-related blindness and have driven increases in pesticide use since their introduction some sixteen years ago.

On this last point, a new study on GE crops out last week added yet more weight to the body of evidence contradicting the GE crop industry’s long-standing myth. Published Friday in the journal Environmental Sciences Europe, the Washington State University (WSU) study offers a simple but devastating finding: GE seeds dramatically increase pesticide use, and that use will grow unless we change the course of our food and farming system.

So here it is, the pesticide industry’s dirty little secret: GE seeds are no green solution to the world’s food needs, but are rather the growth engine of the world’s biggest pesticide companies. In point of fact, the latest wave of GE crops is expected to drive a 25-fold increase in the use of one particularly nasty pesticide (2,4-D) in corn over the next seven years.

Analyzing USDA data, the study—authored by WSU research professor Charles Benbrook, a former National Academy of Sciences’ executive director—shows that GE crops have driven up overall pesticide use across the country, with 400 million more pounds applied from 1996 to 2011. Just last year, GE crops used 20 percent more pesticides on average than non-GE crops. The adoption of herbicide-resistant crop technology has been the primary driver, contributing to a 527 million pound increase in herbicide use during the same period. And the increase in pesticide use is expected to continue, if USDA approves the next wave of GE herbicide-resistant crops.

Back to the future: new GE seeds and old pesticides

These new data remind us that–notwithstanding the marketing tactics of Monsanto, DuPont and Dow–our farmers and agroecosystems remain tethered to the pesticide treadmill in ways that we all pay for in one way or another.

At least two-dozen types of weeds are now resistant to glyphosate, the main ingredient in Monsanto’s Roundup. Farmers throughout the southeast and, increasingly, the Midwest, are abandoning entire fields to these ‘superweeds.’ In California, the most agriculturally productive and diverse state in the nation, weeds have developed resistance to both glyphosate and paraquat, infesting up to an estimated million acres, with the area and type of resistant weeds continuing to rise. As weeds become increasingly resistant to RoundUp, farmers use greater quantities of the product and eventually resort to older, even more dangerous pesticides. And as the Benbrook study notes, farmers are on the hook for these less effective, increasingly hazardous and expensive products.

The next cycle of the treadmill is especially frightening. 2,4-D-resistant corn is the first in a new flood of industry products currently under consideration by USDA. If the agency approves it and other 2,4-D crops, use of this hazardous pesticide in corn is expect to surge 25-fold over the next seven years, putting farms, farmers and rural communities in harm’s way. The chemical has been linked to birth defects, neurological damage and cancer, and children are especially susceptible to its effects. For these reasons, 70 medical doctors and health professionals joined Pesticide Action Network this summer in urging EPA to reject Dow AgroScience’s application for new uses of 2,4-D.

Monsanto, Dow and other major pesticide companies stand to benefit the most from the continued use of glyphosate and surge in 2,4-D and other chemical sales that will accompany the next round of herbicide-based GE crops. So it should come as no surprise that the largest opponents of California’s ‘Right to Know’ ballot initiative to label GE foods are the pesticide companies, together spending nearly $20 million to blanket the airwaves with false and misleading ads about the initiative. I am heartened, however, by recent polls showing Californians resolute in their demand that GE food be labeled.

Of even greater importance, perhaps, is the fact that people are asking serious questions about this technology, and its place in our food and farming systems. Finally we are having a genuine public conversation about genetic engineering, pesticides, our health, our rights and who should control what we eat and how we grow our food: corporations or communities. True, we should have had this conversation sixteen years ago, before the first GE seeds were ushered to market by our public agencies, without adequate safety or efficacy testing. But here and now is still a very good place to start.

Additional resources for editors and reporters:

Pesticide Action Network North America (PAN North America, or PANNA) works to replace the use of hazardous pesticides with ecologically sound and socially just alternatives. As one of five PAN Regional Centers worldwide, we link local and international consumer, labor, health, environment and agriculture groups into an international citizens’ action network. This network challenges the global proliferation of pesticides, defends basic rights to health and environmental quality, and works to ensure the transition to a just and viable society.