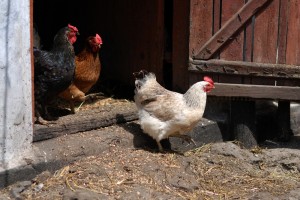 I really did not want to be a cliché from Portlandia. But, sometimes, marital harmony gets in the way of stereotype avoidance.

For the past two and a half years, we’ve been owners of Harry, Ron and Hermione, the Hogwarts hens. (We joked that if we ever got a rooster, we’d name him Voldemort). The three lovely ladies, a Rhode Island Red, a silver laced Wyandotte, and a barred Plymouth, have resided in a run in our postage stamp backyard, swilling organic feed and whatever leftovers we remembered to give them. In return, they dutifully laid two to three eggs per day even in our dreary winters, and provided wonderful fertilizer for our compost pile.

Earlier this summer, Harry (the Rhode Island Red) and Hermione (the beautiful but fussy Wyandotte) stopped laying. That left Ron soldiering on. Unfortunately, one egg per day was not enough to feed my growing boys’ scrambled egg habit: a half dozen for lunch, between the two, is not unheard of. “What’s the point of having chickens if we’re paying for eggs,’ I mumbled to myself while pondering whether organic eggs were worth the extra $2/dozen over the cage free vegetarian-fed ones.

I did a back of the envelope calculation, translating the cost of organic feed into the number of eggs we were getting, and realized that we were paying about double or triple the store price for a comparable product. That figure didn’t even take into account the amortization of the coop I built in 2010.

Around the same time as our hens became slackers, one summer evening, we heard high pitched screams coming from the next door neighbors. Adri, our 16-year-old neighbor had seen a rat climb through the fence from the chicken coop into their yard… while her parents were having a BBQ with friends. Nothing like being the neighborhood vector.

So, it was decision time on what to do with the chickens. They weren’t pulling their weight, and were attracting some unsavory characters to the neighborhood. To solve the egg cost dilemma, we could have bought some more baby chicks and within 6 months increased our egg production accordingly. However, Portland limits the number of chickens to three per backyard unless you get a permit, for which we wouldn’t qualify based on the coop’s setback to the neighbor’s property. In any event, more chickens would not have solved the rodent problem.

I tried the passive aggressive approach. I left the coop door open so any passing coyotes or coons could take my problem off my hands. No luck. Geez, where’s a predator when you need one?

The problem lies in the fact that our morals get in the way. Neither my wife nor I eat meat—except for my salmon addiction. Seafood doesn’t count as meat, because in my perverse pseudo-vegetarian logic, I just can’t relate to a clam the same way I can relate to a cow or a chicken. Nonetheless, I don’t give a darn if someone else eats our hens. Out of sight, out of mind. My wife on the other hand has purer more noble vegetarian instincts: she really doesn’t want animals killed for food. Knowing that the chickens she helped raise were being eaten would offend her sensibilities.

Over the weekend, I emailed my friend Deb Lippoldt at Growing Gardens for her advice on hen retirement options.  A few e-mails later, Tina from Green Acres Farm Sanctuary, bless her heart, offered to take the girls off my hands. They had just received a grant from the Binky Foundation to turn an old garage into a chicken coop, and had lots of space. I just had to get our birds there.

There is Silverton, a quaint town in the Willamette Valley, about 50 miles south of Portland. Visualize this: It’s a beautiful late summer afternoon, I’m driving down I-5 in my 1997 blue Honda Civic chewing up $15 in gas with a box full of chickens in my backseat. Every time I hit the brakes or turn a bit too suddenly, I hear cackling from the peanut gallery.  An hour later, I arrive at Green Acres, a sign-less driveway on a rural road. It’s a bucolic place, where 30 year old horses and unwanted goats, sheep and chickens live out their days on the verdant Oregon plains. There’s even a goose honking about the chicken coop, who is buddies with Rockstar, a gorgeous but vicious rooster.   There is no charge to take the hens, but to assuage my guilty conscience for dumping my problem off on them, I write Tina a check for $35 as a tax-deductible donation.

Feeling a bit of sadness, I pet the chickens one last time, and leave them to their new home. I am acutely aware of having spent $50 and half a day to resolve the very Portland dilemma of urban vegetarians having farm animals we were not ethically prepared to own. We did the middle class thing of buying our way out, removing from the food system what could have been a family’s dinner for a week. Our ethics, our quasi-vegetarianism, is truly a luxury, a privilege of our economic comfort.