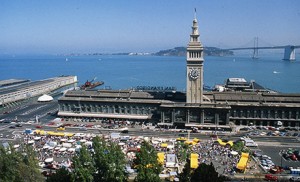 Out the rubble of the 1989 Loma Prieta earthquake, a vision for a grand public market on the waterfront was born. A dedicated group of food lovers and city planners formed the San Francisco Public Market Collaborative to realize this vision, and on September 12, 1992, they organized the one-time Ferry Plaza Harvest Market across the Embarcadero from the Ferry Building.

“It was just a beautiful, inspiring, and auspicious day,” recalls Sibella Kraus, one of the founding members of the San Francisco Public Market Collaborative, founder of the Center for Urban Education about Sustainable Agriculture, or  CUESA, and current president and founder of Sustainable Agriculture Education (SAGE). More than 50 regional farmers and food producers sold produce, meats, and artisanal products that day, and about 15 of San Francisco’s best-known restaurants (such as Zuni Cafe) prepared street food. Generating $75,000 in sales, more than 10,000 people attended the event, and 2,122 of them signed a petition demanding a permanent market.

The concept took root. While the City had initially resisted the idea, the Harvest Market was such a success that the following spring, the weekly Ferry Plaza Farmers Market was inaugurated.

In spring of 2013, CUESA will officially celebrate 20 years of the permanent Ferry Plaza Farmers Market with reflections, special guests, and events. Now we commemorate the anniversary of that very first market that started it all. We spoke with Kraus to learn more about the market’s inception and its growth over the years.

What was the inspiration for starting a farmers market at the Ferry Plaza?

In the mid- to late 1980s, there was a public market movement going on across the country. In San Francisco, the vision for a public market was strongly held by some forward-thinking developers, restaurateurs, food producers, and architects, several of whom had worked hard to start a public market in Oakland a few years previously. I think what brings these things to life is a broad set of people who really believe in it and want to see it happen.

What was the Collaborative’s vision for the market?

The goal of the San Francisco Public Market Collaborative was to develop a permanent public market, and the idea was that a farmers market would be an initial step toward that. The Collaborative’s board and supporters were familiar with markets all over the world, from Pike Place in Seattle, Granville Island in Vancouver, and La Boqueria in Barcelona to smaller markets. The concept was to create something similar here.

Two developers behind the San Francisco public market movement, Tom Sargent and Joe Weiner, had been talking to the City for a few years about possible locations for a public market, mainly on one of the wider piers. In 1989, the earthquake damaged the freeway over the Embarcadero between the Bay Bridge and Broadway, and it was taken down in 1991. Seemingly overnight, the central part of the city was reconnected with its waterfront. In those days, there was a two-acre interim parking lot in front of the Ferry Building, and that’s where we started the farmers market. It took over a decade and lots of contention to transition from the freeway-grimed waterfront of the 1980s to the sparkling place it is today. The market was part of making that transition happen.

How did the first market evolve into a permanent, year-round market?

When we first approached the Port with the idea of a permanent farmers market, they said no, so we did the market on September 12, 1992, as a demonstration. It was a phenomenal success, attracting about 10,000 people. Out of that, we got permission to do the seasonal market in 1993. That first year, the market was supposed to go May through October, but by the end of August it looked like it had really taken. Suddenly, we were thinking about all the things we would have to do to close the market and then reopen it, so by early September, we said maybe we should just be open year-round.

Once the City saw that the market was being widely used, I think there was a sense and spirit to facilitate it and work through problems rather than throw up brick walls. There were a couple donors in the beginning to help with cash flow, but we were able to do it pretty economically. In those first years, there were just a couple part-time people running everything—a market manager and me, and some staff running the education programs.

How did education become an integral part of the market?


When we started permanently in May of 1993, it was a little slow, quite frankly, and some of the farmers were saying, “San Francisco is full of single people who just want to buy one peach. Where are the families?” We started Market Cooking for Kids and our Seasonal Celebrations as a way to attract families, with activities for kids. In 1994, CUESA was formed as a nonprofit to fulfill the educational mandate of the Collaborative.

When you started the Ferry Plaza Farmers Market, there were just two other markets in San Francisco, Alemany and Heart of the City. Now there are more than 25. How has the farmers market landscape changed over the last 20 years?


During the 1990s there was an interest in starting more markets, especially by neighborhood groups. But there were a lot of obstacles around permits, and not much streamlining or understanding of what the regulations were. We did a lot of work with the public health department on the issue of sampling at the market. Having temporary food stalls was also rather complicated because the law didn’t readily allow for those food stalls to be there every week. As the systems within the city got more streamlined and there got to be a broader body of knowledge about running farmers markets, it built up from there.

What role has the Ferry Plaza Farmers Market played in the evolution of San Francisco food culture?


The Ferry Plaza Farmers Market and Ferry Building Marketplace contribute significantly to San Francisco’s reputation and draw as a great food city. If I think back to the language in the 1994 promotional brochure, where we imagined the San Francisco Public Market as a “showcase for our region’s extraordinary agricultural bounty,” that’s really what it’s become. It’s obviously directly important for the vendors and the shoppers, and it’s a real point of pride for the city.