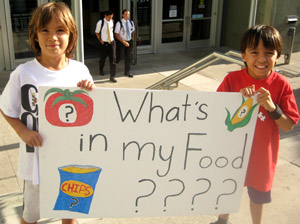 How and why we can find ourselves 15 years into the commercialization of GE crops without a single long-term, animal health impact study until now is the story beneath this story. I’ll get to that in a minute.

Meanwhile, news of the study has gained global currency and already France has called for a probe that could lead to European Union intervention including emergency suspension of imports of the GE corn, a Monsanto product. Back at home, the findings take on particular relevance as California voters consider the Proposition 37 “Right to Know” initiative to label GE foods and as USDA considers approving a new wave of GE crops, starting with 2,4-D corn.

What the study says

In a nutshell, the scientists—led by University of Caen molecular biologist Gilles-Eric Séralini—tested the long-term health effects of feeding rats diets consisting of different percentages of Monsanto’s RoundUp-Ready corn, both from fields treated and not treated with the herbicide RoundUp. They also tested the effects of RoundUp alone by comparing the health of rats fed a conventional (non-GE) corn diet with and without RoundUp added to their water, at the levels that have been found in tapwater or in GE feed.

The researchers found that rats fed GE corn and those whose water contained environmentally relevant levels of the herbicide RoundUp faced the following:

And the effects grew over time, so that by the beginning of the second year of the study, 50-80 percent of females in all treated groups had developed large tumors versus only 30 percent of the control group.

Why haven’t we heard of these kinds of results before? To date we’ve only had a handful of short-term lab studies, almost none stretching longer than 90 days, the equivalent of adolescence in the study animals. The kinds of tumors and organ damage found by the European scientists take a bit more time to develop.

No single study can be definitive, but what Séralini’s work points to is the need to take very seriously, and more rigorously understand, the risks to human health posed by GE crops and foods.

And here’s the bigger news story: why is this the first long-term health study on the effects of eating GE foods ever to have taken place, despite their presence in our food supply for 15 years?

Unfortunately, independent research in the U.S. into the health effects of GE foods before they are released into our food supply has been virtually impossible. The “Big 6” pesticide and biotech companies that manufacture and tightly control patents on GE products have suppressed and restricted research into the efficacy and health impacts of their products. Licensing agreements expressly forbid research unless it has been approved by the patent-holders, and they retain and exercise the right to prevent publication when results are not as desired.

Scientists have been complaining about this state of affairs since at least 1999. More recently in 2010, a Scientific American editorial again noted both the lack of access and suppression of research.

Industry repeatedly insists that their GE products are safe, but they do so on the basis of studies that have never been repeated and have been criticized by independent scientists as deeply flawed. Repeating a talking point is not the same thing as repeating a study.

Meanwhile, contrary to popular belief, U.S. regulators at the Food and Drug Administration do not require independent studies verifying safety before approving the release of these products into our food supply.

The Séralini study will draw predictable opposition from Dow and Monsanto as these companies rush new GE crops like 2,4-D-resistant corn to market. And who knows how long this particular news cycle will take to play out.

I can only hope that the shockwaves generated by this study will wake up the regulators in our public agencies who have been willfully asleep at the switch for 15 years now. In the meantime (since said regulators seem to be clinging fast to their pillows), it appears to be up to Americans to assert our right to know what’s in our food and to choose for ourselves whether to eat genetically engineered products or not. This fundamental right to know will be at the ballot box in November when Californians have the opportunity to vote for Proposition 37 and demand labeling of genetically engineered foods.

Learn more: Read PANNA’s position on Proposition 37, see our summary of existing research on health and environmental impacts of genetically engineered foods and check out the fully referenced synthesis by independent scientists here.