Choosing the Lowcountry: Eating and Buying Local in South Carolina 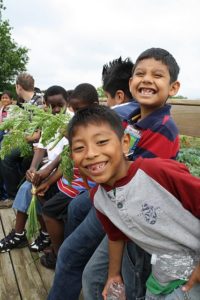 Residents of South Carolina’s Lowcountry know that the area’s vibrant culture and scenic beauty constitute something special, something that represents more than the group of counties contained within its geographic perimeter.

Jamee Haley, executive director of Lowcountry Local First (LLF), recognizes that the unique character of the state’s southernmost region depends as much on the health of the economy as it does on the creative pursuits and hard work of the people who live there. Whether in the world of agriculture or business, she works to inspire those who share her appreciation for and dedication to their local communities to make a simple decision: “Choose the Lowcountry.”

From this request stem the organizations two primary initiatives, Eat Local and Buy Local. In Haley’s words, both sides of LLF “are about local economic development and the preservation of people and place.” This approach acknowledges the common links between small-scale business and agriculture, and works to support these two aspects of the Lowcountry’s economy as they exist in concert with one another. Haley noted that it’s often easier to encourage Lowcountry residents to eat locally because of the “immediate satisfaction” of diving into a plate full of fresh, high-quality local produce, meats, and seafood, but that buying from local businesses shares the same underlying principles as supporting local agriculture.

“There’s less environmental impact, it brings more money back into the local community, it gives you a better experience. [These businesses] are employing local people [and] giving back to non-profits,” Haley underscored.

LLF sees its primary role as an advocate for Lowcountry businesses and farmers, and this aim informs the organization’s myriad programs to promote development and collaboration. In the five years since the organization’s founding, LLF has provided a range of resources to businesses, farmers, and community members that includes workshops with local business experts, farm tours, weekly networking opportunities, and lists of area CSAs, farmers markets, and meat or seafood shares.

The organization’s emphasis on collaboration stems from the belief that creating and sustaining a dynamic local economy requires that businesses and farmers themselves invest in other local operations. By encouraging reciprocity and engagement, Haley noted that the LLF gives the Lowcountry’s business and agriculture communities “opportunities to connect with each other [in order] to build those relationships that…will help make them succeed.”

Though a relative newcomer to the world of local, sustainable agriculture and economic development, LLF has already established itself as an organization that is both eager to learn and willing to innovate. Still, one of the primary challenges for the young organization has been catering to the needs of its broad membership, which draws in anyone from accountants to coffee roasters to farmers. Navigating the demands from 500 diverse members can be difficult, and Haley strives to address common issues without diluting the organization’s efficacy.

“It’s easy for me to identify need, but sometimes I have to hold myself back and say, ‘This needs to be done, but maybe not by us or maybe not right now,’” Haley noted. With its focus on strong partnerships with others in the business and agriculture communities, LLF aims to maintain its role as a community advocate while simultaneously gaining opportunities to learn, grow, and share information. Haley added, “I see our role being a catalyst for making [local economic development] happen [by acting] as a consultant for other communities who want to have an Eat Local First or Buy Local First program.”

For example, LLF’s collaboration with the Carolina Farm Stewardship Association has provided Haley and her colleagues with “an opportunity to tap into their expertise” as well as to spread key insights from one of LLF’s biggest triumphs, its farmer mentoring program. The mentoring initiative arose as a crucial first step to address the challenges associated with South Carolina’s aging farmer population, and has connected 70 apprentices with mentor-farmers to hone their skills in business management and sustainable agriculture.

The next phase in LLF’s broader aim to support new and emerging farmers is the development of South Carolina’s first farm incubator program, an initiative that will take root this fall. After a year of searching the Lowcountry for a suitable location to host the program, LLF turned to long-time supporter Andrea Limehouse, who agreed to lease 10 of her 60 acres of farmland to the organization for one dollar per year (yes, one dollar).

Thanks to her generosity, six new farmers will be able to manage and cultivate 1-2 acres of that land for up to three years, using shared equipment and a tractor donated by Steen Enterprises. A local architect has offered to design a communal packing shed to comply with GAP standards, and LLF is currently in the process of securing funding to bring those plans to light.

Additionally, one of LLF’s mentor-farmers will be available to guide these growers as they confront the challenges associated with their new profession. In the long-term, the organization aims to match these farmers with land opportunities as they transition away from LLF’s shared growing site. Haley hopes that by giving new farmers a solid foundation during the crucial first years of their operations, LLF will be able to “help them find those opportunities with the advantage of having built up their market for the past three years.”

While LLF’s success over the past five years has been encouraging, Haley still noted that the relative inertia of government authorities to embrace policies that support local agriculture and businesses is a considerable roadblock to progress. “There’s always the fear that the whole local food thing is a trend, and we want to make sure that people understand that we can’t afford for that to be a trend, that it’s got to be a way of life,” Haley stressed. In a political climate where the government’s idea of agriculture “is not always the same” as LLF’s, Haley argued that much of the organization’s work necessarily involves demonstrating the economic benefits of local agriculture.

As Haley championed the role of local agriculture and entrepreneurship in fostering strong, sustainable economies, she also underscored the cultural significance of these activities. Simply, she pointed out that “these businesses and farmers are a critical component…of what makes this place special.”