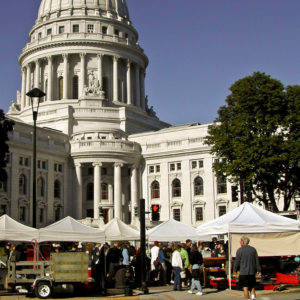 “I’m the only middle man I like,” farmer Bill Warner says of his preference for a direct marketing business model that’s become known as “retail agriculture.” The 53-year-old Warner and his wife Judy Hageman co-own Snug Haven Farm. Located in Wisconsin’s Dane County, they supply an acre’s worth of spinach, tomatoes, flowers and herbs to farmers’ markets, restaurants and a buyer’s club. More than half is sold to outlets in the nearby state capital of Madison. Most of the balance is delivered to customers three hours away in Chicago.

Warner sees growing demand for small farm products in grocery stores and institutional markets like schools, universities and hospitals. These high-volume wholesale channels require farmers to aggregate products for somebody else to deliver via semi-trailer truck. Snug Haven has an additional 25 acres of cropland that could be used to supply nearby wholesale markets. This year, this parcel produced hay sold to area farmers. Next year, Warner intends to raise rolled oats for human consumption and rent some ground to an organic dairy farmer.

Warner’s skepticism towards middle men extends to the financial-services arena. He’s yet to meet a banker who understands his business and he sees no point in “cleaning up to go to town, fill out forms and get rejected. If we need to borrow money, we go to our customers,” he says. Warner has pooled loan funds from customers to buy the last four of the farm’s 13 hoop houses as well as a $25,000 tractor. This approach didn’t work on home refinancing.

“The bank said we didn’t qualify because we don’t have enough farm income or steady paychecks from off-farm income,” Warner explains. “I guess we’re too poor to be able to afford to save money through lower mortgage payments.”

His interactions with Chicago chef Rick Bayless underscore the limits of direct-market financing. In 1998, Bayless lent Warner $10,000 to buy two freezers and to expand his hoop house operation. Warner repaid the loan by discounting the price of 18,000 pounds of frozen tomatoes for Bayless’ Frontera Grill.

In 2003, Bayless started the Frontera Farmers Foundation. Last June’s annual fundraiser drew about 400 people to Frontera Grill—drumming up $149,000 for 13 farmers. Over the last decade, the foundation has provided $1million in capital development grants to 30 Chicago foodshed farmers.

The foundation benefits the restaurant, but isn’t a core business mission. “Our job is to buy food and cook it for people,” foundation secretary Jeff Maimon explains. “That we have to help our suppliers finance their businesses exemplifies how flawed the U.S. food and agriculture system is.”

I recently wrote here about a new federal regulation that could accelerate financial sector involvement in capitalizing local food systems. The pump priming should begin with Farm Credit System (FCS)—a century-old agricultural lending network created by Congress. In part, the new regulation requires FCS to do a better job of serving the Snug Haven Farms of America.

Wisconsin’s Badgerland Financial has a $2.3 billion loan portfolio involving 9,000 customers in a 33-county market territory. It’s one of 84 FCS direct lending associations nationwide now charged with creating an annual marketing plan showing how they serve all “eligible” and “creditworthy” borrowers. Implicit in Farm Credit Administration’s “diversity and inclusion” rule is the criticism that FCS institutions haven’t been using their advantages as a creature of Congress to provide services that help eligible producers become creditworthy.

Badgerland’s innovative response is to create a position entitled “emerging market specialist.” The job description reads: “Knowledge of or experience with local, organic, and sustainable agriculture practices and production is preferred but not required if the incumbent has a strong desire to learn and immerse himself/herself in these target markets and centers of influence.”

“You talk about pride of ownership,” says Link of the small farmers he met on the 100-mile bike route. Link sounds enthusiastic about choosing a well-qualified person to invest “time and resources to grow this segment of Badgerland’s marketplace.”

This is good news to Bill Warner. “I might be interested in the job if it doesn’t require wearing a tie.” Warner’s family has farmed in Wisconsin for generations. Yet, it was news to learn Badgerland has federal statutory obligations that make it more accountable to agriculture than banks.

He says development of small-scale farming networks capable of delivering large volumes of product to nearby markets will require new financing models. “Banks create loan terms that are hard for small farmers to meet partly because it may cost them as much to manage a $5,000 loan as a million dollar loan. Badgerland will have to create a hole that fits the peg of small-farm financing needs. They have the board to do this. It’s called money.”

Bob Heuer brings more than two decades of experience writing about agriculture, finance and regional economies to his work as a public policy/marketing consultant. In the 1990s, he contributed dozens of articles to AgriFinance and AgLender Magazines. From 2003 to 2010, he consulted for Farm Credit Council—the Washington lobbying organization for America’s largest ag lending network. In 2012, he wrote about Farm Credit System for Civil Eats. Bob represents suburban Chicago’s Evanston/Skokie School Dist. 65/202 legislative committee as a gubernatorial appointee to the Illinois Local Food Farms and Jobs Council. Read more >