All Praise the Civics of Food Hubs | Civil Eats

All Praise the Civics of Food Hubs 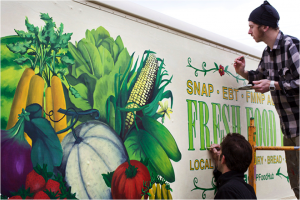 Just a few years ago there were but a smattering of “networks that allow regional growers to collaborate on marketing and distribution,” as Grist writer Claire Thompson observed, “networks that include a broad range of operations, from multi-farm CSAs to Craigslist-like virtual markets where buyers and producers can connect.”

Today, news stories about such food hubs are as frequent as a retweeted Mark Bittman article. With a big-tent definition, the USDA lists over 160 in operation from non-profits to private for-profit models. The East Coast is in the vanguard; New York, Virginia, North Carolina, and Vermont host the most. More remarkable than their media-worthy increase in numbers, is that food hubs are a wonderful example of the best face of the food movement’s transition beyond an earlier focus on labeling, markets, and matters of quantity, toward broader cultural issues of justice, sovereignty, and community.

With the USDA trumpeting and a growing number of community and food policy planners discussing them, hubs are deserving of praise for two substantial reasons: One has been duly noted, the new models’ focus on economics and supply that fill a “missing link” or a “missing middle” in local food infrastructure.

But in their best form hubs are more than economic catalysts and efficient truck routes. They are community organizers. And this second innovation is where the praise should be louder. As much as they pioneer the replacement of lost distribution infrastructure, food hubs are civic leaders, entities that operate educational farms, address food deserts, attend to the socio-economic barriers to going organic, promote philanthropic aims, and provide job training. It’s this civic community-building character of food hubs that truly shows their forward thinking.

Closest to my home in Pennsylvania’s Lehigh Valley, Common Market’s mission-driven model is making good inroads around Philadelphia. Founded by Tatiana Garcia-Granados, Haile Johnston, and Bob Pierson in 2008, the hub works to build capacity “with farmers and institutional food service at either end of the food supply chain,” as Johnston told me. One that stands out nationally for integrating community and environmental goals is another non-profit, Local Food Hub, in Charlottesville, VA.

Started in 2009 by Marissa Vrooman and Kate Collier, Local Food Hub has come to redefine the very meaning of distribution in more justice-promoting ways as they devised a new way to aggregate and distribute food. It’s for good reason that they’ve become oft-referenced darlings of Kathleen Merrigan’s USDA push to rebuild local infrastructure.

It’s not just that Local Food Hub brings in food from over 70 area farms and distributes it out to more than 150 locations—hospitals, schools, restaurants, etc.—increasing sales, boosting farmer security, and adding local food bounty to the area. It’s that with the help of their educational farm at Maple Hill (leased to them by Dave Matthews, as it were) they’ve become a community leader.

Just this year, they’ve helped the Boys and Girls club operate its own farmers’ market, run by the kids and for their families. Its staff works on farm-to-school initiatives with area schools. At Maple Hill they host workshops on topics ranging from season extension to beekeeping to soil management. They recently partnered with another non-profit, the International Rescue Committee, to provide “refugees paid work opportunities coupled with intensive hands-on farm training and education.”

They host crop mobs, install raised bed gardens in low-income neighborhoods, help new canning initiatives, donate 25 percent of their food to food banks. No small wonder their Director of Outreach and Development, Emily Manley, is over-taxed, laboring under a deceptively straightforward title. Her job is more like that of an environmentally astute community organizer.

Recent arguments by leading food reform advocates offer complementary evidence of just this kind of on-the-ground growth toward food justice, sovereignty, security, and workers’ rights. We hear it from policymakers at various levels, from journalists like Barry Estabrook and Tracie McMillan, and from grounded research compiled in books like Food Justice and Cultivating Food Justice. They’re all arguing that food reform can be a means for social betterment, not just an end unto itself. If the accomplishment of the local food movement’s prior decade has been labels, stores, markets, economic models, and increasing quantity, the turn towards food justice helps put the focus on how we live, not just what we eat.

All of this lends credence to a call for highlighting the community-building ends food can serve. It’s the task before us in the Lehigh Valley as we think about the availability of fresh food for the next generation. As our local Buy Fresh, Buy Local chapter creates a Fresh Food Access Plan intended to lead the way towards 2030, we may or may not find that a food hub fits the regional context, but if we do it will owe much to the better part of local food popularity that has turned its attention to pursuing local food as a means to broader civic ends.

It’s a hopeful sign to see food hubs getting their due praise, but we should laud them for their civic leadership alongside their prowess as packing house depots. They too, like community gardens and urban farms, may help us rebuild lost communities, not just lost infrastructure.

B.R. Cohen is a professor at Lafayette College in Easton, PA, where he teaches courses about science, technology and nature, studies the historical origins of industrial agriculture, and works on the future of sustainable food. He is the author of Notes from the Ground: Science, Soil and Society in the American Countryside (2009) and co-editor of Technoscience and Environmental Justice: Expert Cultures in a Grassroots Movement (2011). More details are at his homepage, brcohen.net. Read more >