From Backyard Farmer to Community Visionary in Oakland | Civil Eats

From Backyard Farmer to Community Visionary in Oakland 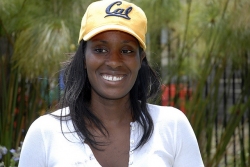 Abeni Ramsey started growing food in her West Oakland backyard when she was a college-aged single mom who wanted her kids to eat better food than what they could afford. Some seven years later, she’s well known among the Bay Area food community, selling produce from her business, City Girl Farms, to local restaurants and through a community-supported agriculture (CSA) program. Now she plans to open an urban farm store and restaurant in Oakland, and is working with a partner to start farming on 220 acres about an hour outside the Bay Area. I caught up with Ramsey recently to learn more about her involvement in the local food movement and her plans for the future.

How did you get started growing food?

My grandfather grew up on a farm and moved from rural Virginia to New York City. He always had plants growing—potatoes, sweet potatoes, okra, corn. I used to spend every summer with him in Jamaica, Queens, and I remember the smell of tomatoes when I opened the gates of his front yard.

I ended up having my first child while I was in college. So I dropped out and was trying to figure out what I was going to do with myself. I traveled around West Africa and Southeast Asia and saw people trying to eke out subsistence from the land, and I decided that I wanted to help people in the developing world grow more and higher quality food. So I went to UC Davis [to study agriculture]. I now had two kids, and times were really tough. We would eat a lot of Top Ramen, really garbage food, and I knew it was wrong, but I didn’t have a whole lot of options. I applied for food stamps. I found out City Slicker Farms had a program where they would install a garden in your backyard, so they came and installed a garden. I tried different things I had learned up at UC Davis on my plot. I got really productive; I added chickens and goats to my yard, and we were eating eggs and making cheese and yogurt. We were really able to get a full complement of nutrients out of that backyard, which was an eighth of an acre, if that.

How did you move from just growing food for your family to becoming involved in activism around food justice?

I graduated from UC Davis with a bachelor of science in agricultural development. City Slicker had a job opening for a farm manager, so I was hired. I managed seven total plots throughout West Oakland. That was my introduction to the food-justice side of the urban ag movement.

I knew what it felt like to live in a food desert, but I’d never heard it characterized that way. I’d seen it firsthand in other countries, but I never knew that it was this widespread problem across this country. I was traveling to another [town] to go to a budget grocery store, but when you’re doing it, you don’t think it’s weird, because that’s what everybody does. So it was through this organization that I began to see my environment through an outsider’s lens.

[City Slicker] was giving away food, which was great, but it doesn’t fix the problem. It doesn’t empower people; it doesn’t give you a job; it doesn’t give you choice. So I left that organization and worked with youth who were getting employment through an urban-ag organization, Dig Deep Farms. But it was difficult continuing to work in the nonprofit sector because I had kids to feed. So I made the decision to acquire some land for myself and start my own farm business. So that’s how City Girl Farms was born.

I hear you’re planning on opening an urban farm store and also have a restaurant in the works. Can you tell me about those projects?

One of the biggest problems for people who want to do chickens and goats and bees is that you spend so much time running around trying to find supplies. And I want to have a place where people with common interests come together. I really enjoy sharing vegetables over the fence with my neighbors, so the store will be a repository for all of that. It’s a resource for folks to come and teach workshops, to do crop swaps, to maybe set up a small farmers market in front of the store. I want to offer discounts to people who are in the backyard gardens program with City Slicker Farms, which is what birthed my first garden.

The restaurant was the brainchild of myself and my good friend Ibrahim Baaqee. I’ve been selling [produce] to restaurants, so I figured I might as well just ship it to my own restaurant. The name of the restaurant is Township. We’re trying to keep it uber local. We’re looking at April as our opening date.

Some would call the Bay Area the epicenter of the food movement, and Oakland in particular is becoming known for urban farming. How have you seen the movement evolve, and why do you think it’s flourishing in this area?

The birth of California cuisine—seasonal, artisanal—really has come out of Alice Waters’ trailblazing in the Bay Area. And there’s a culture of activism in Berkeley and Oakland. It’s not just about feel-good gardening, it’s about a revolutionary act of taking control of your food source. And then the climate. In Detroit, I know they’ve got urban farming but they also have a hellish winter. And there is not an influx of people who have power and privilege [in Detroit]—but there is in West Oakland.

I don’t mean that in any negative way. Willow Rosenthal, who’s the founder of City Slicker Farms, has power and influence, so people listen to what’s going on with City Slicker. There are a lot of people who have been struggling and starving in that community for a long time and calling for grocery stores and crime prevention and jobs, but they weren’t heard until they hooked up with urban farming organizations that are coming from the outside.

Do issues of power and privilege ever come between people trying to do similar work?

Being a black woman farming in an urban area, I’ve had some really crappy stuff happen. People make the assumption that farming is new to me, which is hilarious. My people are the oldest farmers in America, damn near. Older people who live in West Oakland, they hold that knowledge — but instead of it really being tapped into, people are acting like they’re changing the landscapes of inner cities. The knowledge is already there; you’re just bringing the money.

Where would you like to see the food movement go from here?

I would love to see NGOs, churches, and community organizations morph this urban farming movement into a nutritional program, so it’s not just about urban food ghettos. The level playing field is nutritional food for everyone.

I’d love to see the food movement find a way to address persistent problems. It can’t just be about putting in gardens; that’s going to wear thin at some point. It’s got to fix something in society.

For a lot of people, starting a garden sounds overwhelming on top of work, kids, and everything else. But you farmed while you were a single mother, in school, working for nonprofits—what’s your advice for anyone who feels too intimidated to grow their own food?

It’s important to be realistic about what you want to do. Do you want to expand the number of vegetables you eat? Do you just want to get your hands dirty from time to time? It’s all up to you—you can do a container garden; you can do herbs in your window—you don’t have to go whole hog. It doesn’t have to look like the Central Valley of California for it to be real. It can be some lettuce that you grow in a container on your porch and pick for dinner every day. That’s cool.

Ramsey’s farm store is set to open this September.

Claire Thompson is an associate editor at Grist, where she focuses on Fix, its solutions journalism lab. Read more >