A Meal Without a Mexican? Your Food Has Already Migrated! | Civil Eats

A Meal Without a Mexican? Your Food Has Already Migrated! 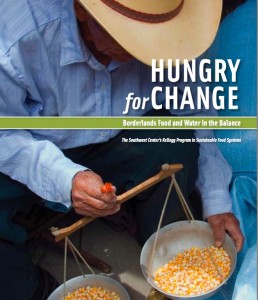 Not even a decade has passed since Sergio Arau filmed A Day Without a Mexican, but 2012 may go down in history as the Year of No Meals Without a Mexican because of labor shortages in American fields and orchards. Since mid-year, there have been a growing number of state and nation-wide reports indicating that hand-picked vegetables and fruits produced in the United States will be unusually scarce this year.

This is not merely because of widespread drought but also because of a paucity of Mexican-born farm laborers remaining in the U.S. Earlier this season, the American Farm Bureau Federation predicted a $5 to 9 billion dollar loss in this year’s harvest of annual vegetable crops requiring hand-picking, largely due to a shortage of farmworkers.

In fact, many states—from California to Ohio—have suffered severe reductions in planted and harvested acreages over the last five years as the economic downturn and heated nation-wide debate over immigration have sent many farmhands back to Latin America. Compared to other harvest seasons, a 30 to 40 percent shortage of skilled harvesters this year has been confirmed by California farming organizations, which note that peaches, cherries and other premium crops are going unpicked.

But now a new report—Hungry for Change: Borderlands Food and Water in the Balance—reminds Americans just how much of their entire food supply is dependent upon labor, expertise, ingenuity, seeds, seafood, and water originating in Mexico. The report, released last week by the University of Arizona’s Southwest Center, was prepared for discussion at the first-ever Border Food Summit to be held September 16-18 near Nogales, Arizona, the most important inland food port-of-entry in the world. Among its many findings are the following points:

Nevertheless, because necessity is often the mother of invention, tremendous innovation in small-scale food production techniques, rainwater harvesting for gardens and fields, micro-enterprise development and food justice education are occurring within the borderlands region. Among the indicators that Spanish-speaking residents of the borderlands are “hungry for change” are the following recent developments:

In short, most Americans—not just those residing in the Southwest border states—have become increasingly dependent on food produced, harvested, processed and serve by Mexican-Americans in the U.S. or Mexican citizens who have recently returned to their homelands. Regardless of the tremendous growth in and success of “food relocalization” efforts across the country, most of our schoolchildren and elders could not eat a nutritionally-balanced diet without the fresh produce and seafood pouring across our borders from Mexico.

But this flow of food will not last if Mexican lands and waters are degraded or overexploited, and if the farmers, farmworkers, fishers and truckers who grow, weed, process, and deliver us much of our food are not offered liveable wages and healthier working conditions. It is time to reset the balance so that those who bring us our daily bread are adequately rewarded financially and ethically for their intelligence, hard work and sacrifices, rather than being treated as second class citizens at best and unwanted presences at worst.