New Book Takes a Look at Urban Farms Across the U.S. | Civil Eats

New Book Takes a Look at Urban Farms Across the U.S. 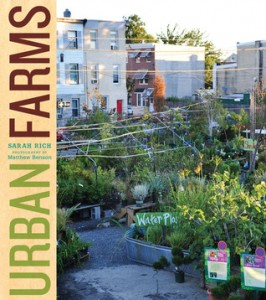 It was an overcast but hot and humid Sunday July afternoon when 50 volunteers arrived to clear a sizable lot of land at Phoenix Press in New Haven, Connecticut, underneath their wind turbine, that is soon to become New Haven Farms’ fifth farm site.

As a founding member of New Haven Farms, it is exciting to see our urban farm sites sprout up around the edges of Fair Haven, an historic area of New Haven and one that has been home to immigrant populations for over 100 years. The mission of New Haven Farms is to promote health and community development through urban agriculture and our goal is to establish and cultivate year-round urban farms that produce nutrient-dense vegetables and fruits, in collaboration with community members who are both within 200 percent of the federal poverty level and suffering from diabetes, pre-diabetes, or have at least two risk factors for diabetes. The organization is now partnering with the Fair Haven Community Health Center (FHCHC) to rigorously build farms in the lowest income neighborhoods of New Haven, and investigate the impact of increased exposure and consumption of fresh, local nutrient-dense foods on this underserved community’s health. Its CSA program began the first week of July–called the New Haven Farms Fresh Produce Prescription Program.

Looking at the barren, rocky site at Phoenix Press gave me a rush. It may look desolate now but I can visualize a farm here, and I can imagine all the green and luscious, nutritious produce that will rise forth out of this lot within a year’s time [with the help of a lot of compost!] So when the afternoon was over and the volunteers got back on their bus, I returned home and immediately opened Sarah Rich’s beautiful book, Urban Farms and allowed myself to be inspired and imagine what this new farm site can become. This book chronicles the urban agriculture movement through gorgeous photography and thoughtful essays that would inspire any good urbanite to pick up a shovel and find a nearby community garden.

With photographer Mathew Benson in tow, Rich has made pilgrimages to and lovingly captured the zeitgeist of many urban farms that now serve as catalysts for urban renewal and economic development, that offer nutritional safe havens to underserved communities who are in real need of fresh and healthy food, that strive to create job opportunities and improve environmental conditions in once isolated and perhaps forgotten about areas of many cities.

Strolling leisurely through her book I can’t help but smile looking at photos of Growing Power in Milwaukee, Wisconsin, a place that I know well from my own Commercial Urban Agriculture training there. There is a beautiful shot taken from the inside of one of their many hoop houses, displaying the long rows of early lettuces that pop up out of raised beds [minus lumber], fashioned simply from layers of wood chips and homegrown compost. Founder Will Allen has always said “it’s all about the soil.”

And then in my hometown of Chicago, I see breathtaking photos of Resource Center’s City Farm, something that has become a treasured institution, from a vantage point that shows off Chicago’s fabulous downtown high rises in the distance in a David and Goliath kind of way. City Farm sits on the very edge of Cabrini Green, a once infamous public housing project that has now turned itself around and has become a gleaming example of an ultra-modern SRO [Single Resident Occupancy], including wind turbines on the roof. Chicago was not known as a model of sustainably when I was growing up but now it boasts many state of the art urban farm and local food sites like Growing Power Chicago and Experimental Station in Hyde Park.

Then I see photos of farms that I dream of visiting myself someday–Novella Carpenter’s Ghost Town Farm in West Oakland, California, which has set the new standard for growing and butchering your own meat; Our School at Blair Grocery in New Orleans, run by fellow Growing Power graduate Nat Turner, who takes in neighborhood kids and shows them the ropes of growing and selling greens; and Earthworks Urban Farm in Detroit, Michigan, which after more than a century since Detroit mayor Hazen Pingree’s “Potato Patch Plan”, serves as one of Detroit’s largest urban farms.

But lest ye think this book is only for those wishing to salivate over the visuals, let me set the record straight. Urban Farms comes equipped with thoughtfully written portraits as well, giving insights into each farm’s history, its community and its food. And there are rich and zesty essays to chew on too that discuss the impact of urban farms beyond the food they grow. “Edible Education” by Allison Arieff, for instance, discusses how school gardens are becoming an invaluable resource, in and outside the classroom. And an essay by Rupal Sanghvi called “Growing Public Health” talks about the positive impact on dietary health of people who participate in urban agriculture.

Whenever I am looking for inspiration and a reason to feel good about life, I have Rich’s book close at hand for a refreshing reminder of what is possible if people come together and make it happen. Her book reminds me of community and commitment, of respect and determination, of a kind of grit and faith that people must certainly have to make these farm dreams come true. It’s not easy work, and it takes a community to keep these places alive. But it does come with its own rewards. Like when you see a little girl eat a radish fresh out of her CSA bag, that gives you a feeling of ultimate satisfaction–and peace.