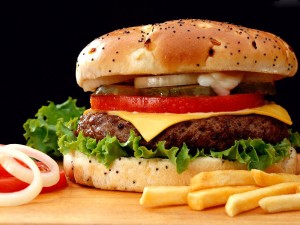 Rarely does the mainstream media bother to connect the dots when it comes to our broken food safety system. Consider these two recent headlines:

The latter story celebrating government action to “help farmers”—prompted by this U.S. Department of Agriculture (USDA) press release—was trumpeted by major media outlets across the nation without any questions raised. Of course American farmers need help during times of drought and that effort is well worth supporting, but is the indiscriminate buying up of meat really the best and only idea the feds can come up with?

What else have you got, Mr. President? Where is the action on issues that will actually impact the nation’s food supply, like our lax food safety oversight? Lately, the administration has been lacking “commitment” in preventing foodborne illness outbreaks. Why stop at PR-driven offerings of economic support when the nation’s public health is at risk?

Last month the U.S. Centers for Disease Control and Prevention (CDC) released its annual foodborne illness data and the numbers are less than encouraging. Here is how Food Safety News reported it:

While the data showed a promising five-year decline of E. coli O157:H7 and Shigella infections since 2007, infection rates stagnated or slightly grew for a number of other notable bacteria, including Salmonella, Campylobacter and Listeria.

Specifically, Salmonella, Campylobacter and Listeria continue to infect in numbers well beyond 2010 goals set by the federal government. Included in the USDA drought purchase is $50 million in “chicken products.” Guess where Salmonella and Campylobacter are commonly found? Poultry products.

The only good news coming from the CDC is the decline in E. coli 0157, which is largely due to that form of bacteria being designated as an “adulterant” by USDA, which makes it illegal to sell contaminated meat. Not so of either Salmonella or Campylobacter, thanks to a meat industry that likes it that way, as I wrote about last year. This same meat industry is now receiving $170 million in government largesse in the name of “drought relief.” How about a little “bacteria relief,” Mr. President?

Of course meat is hardly the only food to worry about getting sick from these days. Everything from spinach to melon to sprouts has caused death and illness. Just to name a few recent alarming recalls:

For bonus points, included on the list of places where those apples slices went? McDonald’s–just in time for the inclusion of apple slices in all Happy Meals. (Burger King is also included in the recall.) This is the danger of industrialized fruit production: one bug can get shipped nationwide.

We do have at least one program that actually works to prevent such outbreaks. Yet it now represents another failure of the Obama Administration on food safety: witness the impending demise of the Microbiological Data Program (MDP), a critical $5 million fresh produce testing program tucked away at the USDA.

As I wrote about in February, the fresh produce industry has worked its lobbying magic to get Congress to cut the program. Seems those pesky recalls didn’t sit well with the likes of Dole and Del Monte. So far, the Obama Administration has given MDP a six-month reprieve but did not request funding in next year’s budget, so the program remains on life support. This, despite multiple outbreaks being prevented by early detection thanks to the cost-efficient program. Dan Flynn, editor of Food Safety News, says that “Big Fresh has the blood on its hands,” and gives industry credit for “killing the nation’s only produce surveillance program.”

Let’s not forget last year’s devastating listeria outbreak in cantaloupe that killed at least 30 and infected 146 across 28 states. These are real people whose lives were changed forever by the simple act of eating a melon. Here is how food safety attorney Bill Marler (and publisher of Food Safety News), who is representing some of the victims and their families, describes the devastation:

Every person and family has a story–all of them quite horrible and heroic. If we told them one by one, they would take up every page of Food Safety News through the end of the year… These families collectively have incurred to date over $8 million in medical bills… If you then add in the pain of the loss of a spouse or living your life with the after effects of Listeria meningitis, you are talking much, much more.

Where is President Obama’s “commitment” to these families?

The Obama Administration has also been stalling on long overdue food safety regulations. The Food Safety Modernization Act was enacted in 2010 to expand the authority of the Food and Drug Administration, but the regulations needed to implement the law have been languishing for months at the White House.

Of course, things won’t be any better if the Romney-Ryan team takes over. As Food Safety News reported recently, Congressman Ryan voted against the Food Safety Modernization Act, despite strong bipartisan support for the bill.

But don’t expect President Obama to make food safety part of his reelection campaign. His administration is far too skittish to do anything that smacks of regulating business, apparently even if lives are at stake. How many more outbreaks will occur while the President continues to play politics with the safety our nation’s food supply?

Postscript: Since filing this article, the federal government has reported that two people have died and 141 were made sick from salmonella, in yet another cantaloupe outbreak, this one in 20 states.