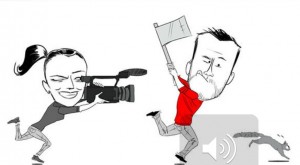 Last time we checked in with Civil Eats, we had just finished up an epic road trip around the U.S., documenting good food stories across the country.  At the time, we didn’t think our job could get much better.  Well…it has.  Starting in September, my partner Mirra and I will be traveling around the world, telling similar stories, only with an international perspective.

Three years ago, I started filming farms, mushrooms, fishing, and cooking in my Minnesota backyard. The project was hyper-local, and it started with my roots. I was born in Minnesota, but had grown up outside the state, so I wanted to learn what my birth place had to offer.  When I started the project, there wasn’t a goal of filming around the world–just the thought that if I was interested in learning how to slaughter a turkey, chances are there were others who would also be interested.  We filmed a lot of stories in Minnesota, and it could have continued indefinitely, but after a year of producing a video every week, it was time to move on.

Traveling the U.S. seemed like an appropriate next step.  Our goal wasn’t to solve the food crisis in this country, or prove anyone right or wrong, we just wanted to explore the successes and challenges of a diverse group of people who were producing their own food.  This meant short films about Burundian goat farmers in Nashville, Sea Urchin diving in Malibu, and bug eaters in Rhode Island.  We showcased people who loved food and cared about how it came to them, despite their dramatic differences in cultural and economic backgrounds.

As what happens with all good things, after 23,000 miles on the road, our trip around the country came to an end. It was time to decide what would come next. And that’s how we came up with an idea: to take on the world. What better way to bring perspective to the local food movement and our ideas around it than by showing what local and sustainable means in other countries?  We’ll be working with Intrepid Travel to realize this ambitious next step.  They are a travel company focused on adventurous and responsible tourism, and they happen to have interpreters, guides and people who know the local culture and food quite well.

Our first trip is on September 1 and we’ll be visiting Japan and China to learn about making udon noodles, farming bluefin, and traditional rice farming that uses ducks and fish instead of insecticides and fertilizers.  After that, we have trips to India, Italy, South Africa, Argentina, and many more countries.  It should be good…crazy, amazing, and delicious.  To announce this epic journey, we made a video, which gives you the gist of our past and future.  Please watch, share, and visit our website for updates from the road.  And come back here for occasional dispatches from the world.