One Straw Revolution Continues: Sowing Seeds in the Desert 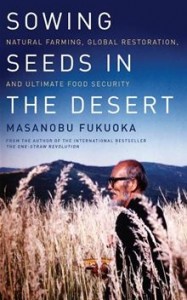 Perhaps the Fall came not in the shape of an apple, but in the form of a seed. The Fruit of Knowledge was actually a grain. When we started to cultivate the land for wheat, corn and rice, we severed our original connection to nature, and from that first act of taking ownership of the soil other ecological evils eventually sprouted. The serpent’s temptation arrived as a plow, a digging stick.

This reconfiguration of the end of Eden parable comes courtesy of Wes Jackson, founder of the Land Institute in Salina, Kansas. Jackson has dedicated his life to solving what he calls “the 10,000-year-old problem of agriculture.” As readers of this website know, tilling the soil year after year comes with serious risks—release of CO2 into the atmosphere, erosion, declining fertility and, eventually, poor crop yields. Jackson has sought to address the conundrum of agriculture (today’s harvests threaten tomorrow’s) by developing perennial grains. Other researchers, including those committed to industrial agriculture, have focused on low-till and no-till methods that require little soil disturbance while still relying on annual crops. Either way, the goal is the same: To feed ourselves without cutting into the epidermis of the earth.

I was well versed in these questions of soil conservation by the time I read Masanobu Fukuoka’s classic, The One Straw Revolution, and the book hit me with the force of revelation. Born in 1913, Fukuoka grew up on the Japanese island of Shikoku, on a ten-acre farm that had been in his family for centuries. He was trained as a plant pathologist and worked for several years “peering into a microscope in a laboratory.” Shortly before World War II—during a bout of severe pneumonia—he had a conversion experience that pushed him away from modern plant sciences. He found a way to “view the world with an empty mind” and came to the conclusion that “there was no need to plow, no need to apply fertilizer, no need to make compost, no need to use insecticide.” He called his method “natural farming.”

Fukuoka’s most revolutionary idea was his rejection of growing rice in tilled paddies of standing water, a method that had been used in Asia for millennia. After years of careful observation and trial-and-error, Fukuoka developed a no-till method of rice, barley and rye cultivation. For fertility, he relied on a cover crop of white clover and judicious application of chicken manure. For seed germination, he enclosed rice seeds in tiny clay pellets and sprinkled them onto a dry field. For weed control (as well as to boost soil organic matter), he left the straw from the grains in the fields: the barley straw mulched the rice, and then the rice straw mulched the barley. “There is probably no easier, simpler method for growing grain,” Fukuoka wrote in The One Straw Revolution. His yields matched or surpassed those of industrial farmers using the traditional paddy method.

No wonder The One Straw Revolution, published in 1978, became an international best-seller. Here was a system of grain cultivation that seemed to solve “the 10,000-year-old problem of agriculture.” But, for me at least, there was one nagging problem: How would such methods work in the vast arid stretches of the planet? Fukuoka’s family farm outside the city of Matsuyama receives, on average, 48 inches of rain annually. His agricultural practices didn’t seem applicable for the Western U.S., or the Mediterranean, or much of Africa.

I was excited, then, for the posthumous publication of Fukuoka’s Sowing Seeds in the Desert. I hoped the book would translate the methods that worked so well in Japan to areas that don’t receive as much precipitation. I wanted to hear what Fukuoka might have to say about my own little plot in coastal California, an area with about 20 inches of rain a year.

I’m sorry to report that I was disappointed. Sowing Seeds in the Desert excels as another primer on Fukuoaka’s Zen Buddhism-inspired ideas of reconceiving our relationship with the natural world. But it fails as any kind of technical guide for applying his methods to arid or semi-arid regions. 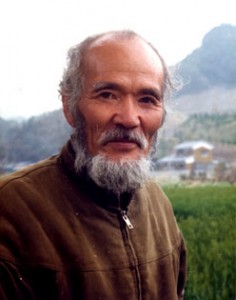 By the time Fukuoka and his longtime American translator and collaborator, Larry Korn, begin Sowing Seeds in the Desert, the Japanese farmer has become an international guru. The sensei receives invitations from communities around the world to come and share his wisdom, and he is soon traveling to North America, India, and Africa to spread the gospel of natural farming. After leaving the fecundity of his much-loved farm, Fukuoka is shocked to discover places where the land has been stripped bare by thoughtless agricultural practices. “Regreening the earth, sowing seeds in the desert—that is the path society must follow,” he declares.

Much of Sowing Seeds in the Desert reads like an agriculturalist’s travelogue. In an Ethiopian refugee camp, Fukuoka encourages displaced farmers to try a mix of Egyptian clover and alfalfa to break clay hardpans and retain soil moisture. In California, he tosses a mix of Japanese cucumbers, pumpkins and okra across a parched meadow. In the Indian state of Madhya Pradesh, he briefly oversees a program of aerially broadcasting seed pellets. Wherever he goes, Fukuoka finds children eager to hear his message. “When I told the children to go home and explain this to their mothers and fathers, they listened with shining eyes,” he writes of an experience in Manipur, India. “Their eyes sparkled like those of the children in Somalia and at the children’s school in Thailand.”

This is thin stuff—sentimental at best, irresponsible at worst. You can’t just hand refugees some daikon seeds and say that broadcasting them will create a garden.

The problem here is that Fukuoka-san appears to have forgotten one of his own lessons: the necessity of carefully observing a place and its biological rhythms. Fukuoka developed his natural farming methods after managing the same fields and orchards for 30 years. “Sensitivity,” as he calls it, is essential for natural farming. But the jet-setting that takes up so much of Sowing Seeds in the Desert is the antithesis of sensitivity. Spending a few days in a hardscrabble hippy commune in California hardly makes one an authority on farming in the San Joaquin Valley.

I’ll confess that, by being so eager for technical instruction, I’m probably missing the point. Fukuoka, after all, is as much a mystic as he is a small-farm manager; his contribution to the craft of agro-ecology is philosophical more than it is practical. He is at his best when criticizing the reductionism of modern science. “A problem cannot be solved by people who are concerned with only one or another of its parts,” he wrote in The One Straw Revolution, and this argument for the interconnectedness of life remains the animating spirit of his last book. “Nature is one body,” he writes in Sowing Seeds in the Desert. “We can say that while human beings and insects are part of nature, they also represent nature as a whole.”

At its heart, natural farming is a way of re-thinking how humans should relate to other living things. It’s a step away from the anthropocentrism of modern, especially Western, thought. “It is only through nature that we can see this original mind,” Fukuoka writes. For him, natural farming is a way of fulfilling the Buddhist ideal of Right Livelihood. “A pleasant living environment for animals,” he writes “is also a utopia for human beings.”

Near the end of Sowing Seeds in the Desert, Fukuoka shares an anecdote about a 1986 conference during which he appeared onstage with the Land Institute’s Wes Jackson and Bill Mollison, the Australian founder of permaculture. At one point, the Japanese farmer drew a picture of Don Quixote’s donkey with “a blind Bill and a deaf Wes both riding backward” and himself hanging on to the donkey’s tail. “The three Don Quixotes, hoping to return to nature, were trying to stop the donkey from rushing wildly toward the brink of disaster.” The sketch is funny because it’s true. There’s something deeply Quixotic, it seems to me, about trying to make agriculture “natural.” As Wes Jackson’s revised Eden parable acknowledges, agriculture has always been unnatural. Every harvest is an artifact.

Even so, we should strive for a more natural farming, an agriculture that strikes a balance with nature rather than bulldozes it. As we search for that balance, Masanobu Fukuoka’s writings will continue to be an essential guidebook. He reminds us that nature is abundant; it’s our own wants and needs that are out of whack. “If we do have a food crisis,” Fukuoka says, “it will not be caused by the insufficiency of nature’s productive power, but by the extravagance of human desire.”

The same desire, I guess you could say, that caused us to be expelled from Eden in the first place.