Wild Salmon Are Back on Menus in California, But Are They Here to Stay? | Civil Eats

Wild Salmon Are Back on Menus in California, But Are They Here to Stay? 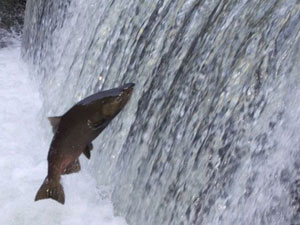 (Updates story with state and federal study on hatcheries)
In a new report, produced by the Food & Environment Reporting Network (FERN) in partnership with California Watch, reporter Maria Finn looks into the sudden resurgence in the salmon population on the California coast and explores whether the current boom will last. This year 820,000 Chinook are expected to swim the Sacramento River, up from 114,741 in 2011, and following a collapse in the population the two previous years.

“A certain amount of fluctuation in the annual salmon yield is natural, but some scientists think that the collapse in ‘08 and ‘09 was part of a more dramatic, and unpredictable, boom-and-bust cycle—and that the fishery could be in for more of the same,” Finn reports. “The problem, they say, stems from the fact so much of the catch—a full 90 percent—originates in state hatcheries.

Finn explains that a typical hatchery allows a wild population to remain just below the river’s dams to spawn. Meanwhile, other fish swim up cement fish ladders—graded man-made streams—that run around the dams and allow the fish to return to the hatchery.

Once there, the ladder-climbers are artificially inseminated, and their fry are raised for about six months. Then they’re released back into the river.  This differs from farmed salmon, which is raised in crowded pens for their entire lifetime. However, Finn notes that because hatchery fish are paired randomly there is less biodiversity, resulting in more vulnerability to changing ocean conditions.

In the report, Finn looks at some of the ways in which experts are seeking to end this cycle and support these Chinook populations for the long haul. Peter Moyle, a fish expert at University of California, wants to relocate the hatcheries, or at least release the hatchery fish down river, so they don’t compete with river-spawning salmon. He also thinks the state needs to restore the rivers and estuaries so the wild fish can thrive.

Another consideration is the dismantling of dams and restoring river habitat for the migrating and spawning salmon. This is already under consideration for four dams along the Klamath River in Oregon and California, and experts believe this could increase the adult salmon population in the river by 80 percent.

An exhaustive two-year study released Tuesday by state and federal wildlife agencies concluded that California needs to improve its hatcheries, saying that the state program does not consider the impact of these hatchery-reared fish on naturally spawning populations. Among other recommendations, the panel said the hatcheries should develop a broodstock management plan that addresses how fish are chosen for spawning and then monitor these fish after they are released.

You can read the full report online at FERN or at California Watch.