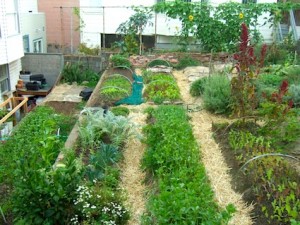 Last month urban agriculture advocates in San Francisco got another piece of legislation to celebrate. City government once again came out to support the growing of food within this dense city, this time by mandating that an “urban agriculture program” be organized. The program will help coordinate existing programs within and between city agencies that touch food production (including the Recreation and Parks Department’s community gardens, the Department of the Environment’s urban orchard work, and the Public Utilities Commission’s water-saving education efforts), as well as look into new ways to expand and improve urban agriculture opportunities (including an audit of city-owned rooftops with potential for gardens or beekeeping; the development of incentives for private landowners to lease undeveloped land to urban ag projects; and–perhaps most importantly–the creation of materials resource centers, where urban agriculturists of all sorts can find the compost, mulch, and materials needed to successfully grow more food).

As a co-coordinator for the SF Urban Agriculture Alliance, a grassroots volunteer group supporting local urban agriculture projects and their respective goals, I am happy that we not only achieved the passage of such legislation, but achieved a more difficult goal: funding for the program. In these days of austerity and endless cuts, our members’ advocacy, and the support of particular city Supervisors (in particular, David Chiu, the legislation’s sponsor, and John Avalos, chair of the Budget committee) were crucial to ensuring that the program would not just exist on paper. The budgeting process is a complex and mystifying beast, but we tamed it, and came out with $120,000 for implementation of the program in the coming fiscal year.

Although the legislation isn’t perfect (there is the possibility that the funding will largely end up going to an urban-ag-ignorant bureaucrat, paid $100,000 a year to be ineffectual), it helps us with what we need to be more successful–as individual backyard growers, as community and communal farmers, and as a city government–in growing local food for local people. And being part of the political process–warts and all–gives us more experience, and thus more efficacy to achieve the changes we hope to see.

Once the strategic plan is completed by the City Administrator’s office (by December 2012), an evaluation will determine whether this program is best housed in a particular city agency, or an NGO. My personal view is that almost every potential city agency has more liabilities than assets to manage such a program, and that an NGO with widespread, true community connections and urban agriculture experience would be better suited for the job. Unfortunately, since the demise of the San Francisco League of Urban Gardeners (SLUG), no such NGO has emerged. So for the urban agriculture movement in San Francisco, our work is far from over. We must remain committed to holding the city accountable in accomplishing their stated goals (such as, among other important issues, supporting urban agriculture), whether from the outside or (should an NGO take on the program eventually) the inside.

Legislative success is certainly a moment to celebrate for any movement (Three Cheers!). But any progressive legislation’s success ultimately relies on a committed, passionate, strategic, and intelligent group of citizens and residents consistently engaged: working with allies in government, holding officials accountable, applying political pressure, and demanding change when it is needed.