Jere Gettle Sows the Seeds of a Movement | Civil Eats

Jere Gettle Sows the Seeds of a Movement 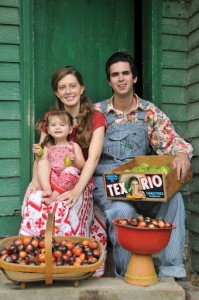 Being a modest man of humble origins, it’s difficult to glean from Jere Gettle just how he came to be something of an apostle for a pure food movement, or, according to a New York Times magazine headline, one of “The Evangelists for Heirloom Vegetables.” Lacking in bombast, not given to hyperbole or self-promotion, much less sermonizing, the seedsman from Missouri seemed pleasantly surprised by all the fuss when asked recently about the meteoric growth of the business he began just 14 years ago, when Baker Creek Heirloom Seeds sent out its first mail order catalog. That was 1998. He was 17.

During a conversation which was interrupted repeatedly by poor cell phone connections and Gettle’s multitasking-he suddenly paused, mid-sentence, at one point to ask someone for help finding some cucumber seeds he’d misplaced-Jere ultimately found refuge and a good signal in the cab of a pickup truck on the Baker Creek farm. I began by asking him about the book he published last fall, The Heirloom Life Gardener, the first of three books Jere and his wife, Emilee, have agreed to write for publisher Hyperion Press.

“We’d had an idea for the last few years about doing a book about what we do at Baker Creek and how we garden; about our history, my interest in heirlooms, our travels, seed saving, and growing tips about mulching and the like; just a little bit of everything about what we do and why heirlooms matter,” he said. 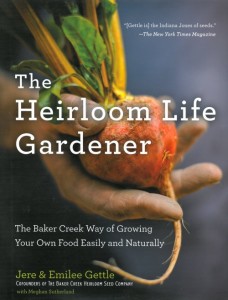 According to The Heirloom Life Gardener, which was lovingly illustrated with hundreds of exquisite, mouth-watering photographs of produce from the Baker Creek gardens taken by Jere and others, heirlooms matter for a number of reasons, not least of which is that they tend to taste better than hybrid varieties. Since convention holds that an heirloom has been around at least a couple of generations, and are often far older, they invariably come with lots of history attached to boot. That was always part of the fascination for young Jeremiath, who, as his homesteading parents migrated eastward from Oregon and Montana to their current location in the Ozark Mountains, learned to read perusing the latest editions of seed catalogs.

The Gettles’ book isn’t a comprehensive guide to heirloom gardening. Rather, it’s a primer on heirlooms and seed saving, a valentine to pure, non-genetically modified, homegrown foods, to wondrous possibilities and “the magic that happens when you plant a seed and watch it grow.”

Their second book for Hyperion–The Baker Creek Vegan Cookbook–is due out in September.

When the Seed Bank hit the local news in June of 2009 (and covered here on Civil Eats early on), I assumed Jere and Emilee Gettle must be more than a little bit nuts. How else, I thought, being of occasionally limited imagination, to explain why a pair of entrepreneurial, presumably intelligent Missourans who sell heirloom vegetable, fruit, and flower seed retail–averaging maybe $2.25 a pack–would pick the old Sonoma County National Bank building in downtown Petaluma, California to set up shop?

One week after General Motors filed for bankruptcy protection, just a city block from the former local branch of Washington Mutual Bank, then the recent record-breaker for the largest bank failure in U.S. history, Baker Creek Heirloom Seeds opened a very different kind of institution, perhaps desperate for good news for a change.

Amidst the wreckage of the greatest economic collapse since the Great Depression, the Gettles made an ingenious choice for a west coast branch of their predominantly mail-order seed business. Jere told the local paper at the time that it was just good business sense–half their California mail order customers lived within an hour of Petaluma. 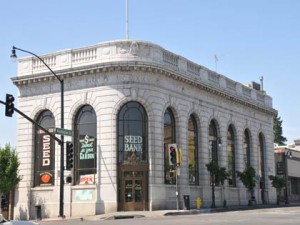 “Well, we just fell in love with Petaluma, but we were awestruck by that building in particular and,” he said with a laugh, “we wanted to do our part to support the banking industry and give it some good press for a change.”

“We wanted to make this a place to get people thinking about what’s in their seed, their soil, and their food, to get a broader discussion going about people supporting their local farmers and emphasizing the need to support their local businesses and keep small businesses going. We really loved that about Petaluma–the abundance of small ‘Mom & Pop’ stores. We thought the Seed Bank would be a great place for people to congregate and learn.”

Last month it featured a talk by Pamm Larry, who helped initiate the California Right to Know initiative, the measure that California voters will have the opportunity to vote on this November, which would label all foods containing genetically modified organisms (GMO) sold in the state, as well as deny the label, “natural” to those foods.

A longtime opponent of GMOs, Gettle put a “Support a GMO-Free Sonoma County” sign on the front of the building years ago. This winter he offered up the Seed Bank as a hub in the Label GMOs campaign to collect signatures for the statewide effort.

The company printed up 160,000 Label GMO seed packs with an educational message about the initiative and adding some heirloom San Marzano tomato seeds (a Roma-like variety great for canning, I’m told), distributing them across the state via a network of hundreds of customers, educators, activists, Facebook friends and others at farmers markets, farm stands, retail stores, schools, churches, garden clubs, and events from Weed all the way down to San Ysidro. The Seed Bank staff and dozens of volunteers collected over 5,000 signatures to help place the measure on the ballot.

Now, as the Seed Bank celebrates its third anniversary, the Gettles’ choice appears to have been both uniquely inspired and perfectly timed, as their company has ridden a groundswell of interest in what Jere sometimes refers to as the “pure food movement.” Gardeners, farmers, foodies, locavores, chefs, tourists, nutritionists and countless more pass through its doors, from around the world, to find a place where heirloom seeds are sacred, whose vault is filled not with dollars or precious metals, but nutrient-rich Northern California manure.

The idea to host a kind of trade show for heirloom growers and farmers in Northern California appears to have emerged rather organically from Jere’s fertile imagination and numerous discussions with other seed folk and growers, including Barbara Melera, owner of America’s oldest seed house, the D. Landreth Seed Co.

The success of the first Exposition, drawing nearly 12,000 people to Santa Rosa over the course of the three day event, led to plans for a larger, more inclusive event for 2012. This year’s event will include displays of over 3,000 varieties of heirloom produce, 300 like-minded vendors of seed and gardening supplies, permaculture instruction, and much more. A Kid’s Day of events will feature fun, educational activities for school children from around the Bay Area. Mac Condill, creator of the largest pumpkin display ever on the White House lawn, will create another of his enormous cucurbit exhibits.

Hundreds of exhibitors will participate in judged livestock and poultry, melon and tomato contests. Seedsmen will discuss seed saving methods, successes and failures, and a truly remarkable list of visionary speakers will be on hand to educate, inform, and activate attendees with presentations on the numerous facets of the pure food movement, encouraging the public to, according to anti-GMO campaigner Jeffrey Smith, reclaim “a stake in agriculture.”

Along with Smith, Canadian farmer Percy Schmeiser, another Right Livelihod award winner who successfully battled Monsanto in court, will be on hand to discuss his anti-GMO activism. Founder of the international Slow Food movement, Carlo Petrini, will be coming from Italy to give the opening night keynote presentation. Joining him will be The Future of Food filmmaker Deborah Koons Garcia, presenting her new film, The Symphony of the Soil. Andrew Kimbrell of the Center for Food Safety and Ronnie Cummins of the Organic Consumer Association will help inform the audience of the current state of affairs around issues ranging from Monsanto to organic standards to the Farm Bill.

Ultimately, with the California Secretary of State having placed the California Right to Know initiative – Proposition 37 – on the ballot, this year’s Exposition, this year’s Exposition, occurring just two months before the November election, will serve as a rallying cry for those who wish to reclaim the public’s stake in our food and agricultural systems. With potentially global implications for food policy, many people in the pure food movement view the Label GMOs campaign as a bellwether for the long term effort to reassert control over a food system long ago left to the devices of multinational agricultural, chemical, and food corporations.

Jere Gettle, the perhaps unlikely apostle for heritage seed and pure food, sows much more than heirlooms these days.