How the London Olympics Will Revolutionize Food 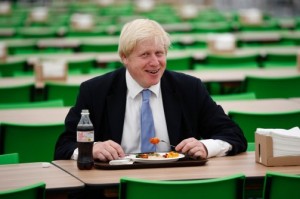 Olympic training regimens are the stuff of legend, but here’s one you probably haven’t heard of: spend 18 hours a day for five years researching every fresh, healthy, comestible, and delicious recipe the host nation can muster—and then be ready to serve them all at lightning speed.

The food for what has been described as the largest peacetime catering operation in the world is measured in tonnes (2,200 pounds), as in: a staggering 330 tonnes of fruits and “veg”; 100 tonnes of meat; 21 tonnes of cheese. But that’s the warm-up. If a “Food Vision” meticulously plotted under the auspices of the London Organizing Committee of the Olympic and Paralympic Games (LOCOG) succeeds, it will lead the way to a much bigger prize: a new standard for the procurement and consumption of healthy, regionally sourced, environmentally sustainable food in London and beyond.

Beating the nearest rival in the Olympic competition was a snap. At the Beijing Summer Games in 2008, it was a toss-up which was worse, the quality of the food or the fact that it kept running out.

“We were very keen not to repeat the culinary disaster of Beijing,” says Rosie Boycott, chair of Mayor Boris Johnson’s London Food directive, which is part of a tightly coordinated network harnessing Olympian muscle for the long-term future of the city’s and, it is hoped, the nation’s, food system. “But that was just the beginning. Back in 2007 the organizers determined that this was an unprecedented opportunity to look at our diets and our health, at our catering industry, at the state of our farms, and to commit to a long-term plan for good food and environmental stewardship.”

“Traditionally, the Games have appointed a master caterer, but we wanted to involve lots of different providers—about 800 in all—and have most everyone adhere to a set of high standards,” says David Russell of the strategic food consultancy The Russell Partnership, which was charged with shaping those standards and enshrining them in a document that virtually all participants have pledged to follow.

The new rules of the Games dictate that much of the food served—including but not limited to fruits, vegetables, milk, cheeses, and meats—will be sourced in the U.K.; animal products will meet or exceed a “Red Tractor” benchmark (an independent food seal of approval launched by Prime Minister Tony Blair in 2000); fish will be demonstrably sustainable; cage-free hens will provide the eggs; milk and chicken will be organic; and drinking water will be free.

“Local and regional foods are a big part of the plan,” says Boycott, and indeed the Olympian PR wires have been buzzing with tales of Welsh lamb, Leicestershire Stilton pie, Perthshire (Scotland) charcuterie, Isle of Wight tomatoes, and sourdough bread from the London borough of Tower Hamlets, baked in a brick oven lined with peat from the nearby Thames. (It is also duly noted that the U.K.’s cultural diversity will be showcased in a wide range of other cuisines, and particular dietary needs—such as vegan and gluten-free—will be met.)

From their earliest discussions with food providers, the planners aimed high, envisioning a “greenest Games yet” (with a zero-waste-to-landfill scheme) whose legacy would be the ultimate transformation of the U.K. food system from increasingly processed and prepackaged to fresh and more local fare.

“One of the greatest shocks at our first meeting with Olympic food partners was to realize the scale of the operation—it takes a little while for 14 million meals to sink in,” says Russell. “As we explained our goals, there was a degree of anxiety and skepticism,” which might well be an understatement, given that the group assembled for an early taste of the Food Vision had never before been called together to collaborate. In the spirit of inclusion, food-service behemoths like Sodexo and Aramark, the National Farmers Union, giant supermarket chains and small, local producers were all invited. The nonprofit advocacy group Sustain engaged in dialogue with Olympic sponsors such as  “worldwide partner” McDonalds. “We started out not completely aligned,” says Russell, “but it was clear that the Games were the ideal catalyst to create lasting change.”

Not everyone got what they wanted, at least this time around. In deference to the sponsors (including Cadbury and Coca-Cola), LOCOG decreed that no other food enterprise would be permitted to use its brand name or even advertise its involvement, relegating a host of eager, homegrown providers to grumbling anonymity. The planners found themselves confronting a potential calamity of far greater proportions, however, when McDonalds initially declared that it expected to have a blanket monopoly on potatoes—fries being a backbone of its own brand identity. “That was a surprise,” says Boycott, “and a bit of a conundrum. But then it was gently explained to them that fish and chips are akin to mother’s milk in Britain.” In the end, McDonalds relented, and a thousand spuds will bloom.

“A happy outcome of all this work has been the readiness of big players like McDonalds to embrace the standards,” adds Boycott, noting that the fast-food chain has also agreed to source its chicken in the U.K. and even to manage the supply chain for all the milk served. “The thing that nobody knows yet is, will McDonalds continue to follow the Olympic food standards afterward? We’re waiting to hear, and hoping.” (McDonald’s did not respond to a request for comment.)

“We want to keep the momentum building,” says Kath Dalmeny, policy director of Sustain, who works with Boycott on London food initiatives and is in charge of the fish that will accompany the resurrected chips at the Games. The 2014 Commonwealth Games will be held in Glasgow, she points out, and Russell is already working on plans for the 2014 winter Olympics in Sochi, Russia. “What’s most important now is what happens after August 12,” Dalmeny says. With her help, one outgrowth of Olympic food fervor has already been launched—Sustainable Fish City, a campaign to have London set a worldwide metropolitan standard for the purchase of sustainable fish and the protection of marine environments.

It wasn’t that long ago that good food in the U.K. was a go-to bad joke, so much so that the resurgence of British cuisine took the world largely by surprise. Some trace it to the 1994 opening in London of St. John, a nose-to-tail eatery on the site of a former smokehouse; others to 1995, when Heston Blumenthal unveiled his version of “molecular gastronomy” at The Fat Duck, in Berkshire. The mainstream protagonist was surely Jamie Oliver, the cheeky kid boosted to international status in 1997 with the BBC television series The Naked Chef and a bestselling cookbook by the same name, both of which celebrated back-to-basics healthy cooking for the average Joe. Russell cites Oliver (who has been a torch runner for the London Games) as among the food celebrities staunchly in support of the Olympic food vision.

Charles, Prince of Wales, is another. Britain’s most notable organics proselytizer and practitioner will be supplying various venues from his storied estates. Once viewed as a rather eccentric royal farmer, the prince now sits front and center in an altering landscape. The gastropub is a commonplace, food artisans are finding favor with eco-oriented customers, and locavore chefs are a dime a dozen.

“The population is starting to care about what they’re eating, and wanting to know where it comes from,” says Russell. “There’s a greater pride in provenance than we’ve seen in the U.K. for many, many years. And we’ve been able to respond to this move in the market, doing things like introducing major outfits to small producers and getting them into supply chains from which they’ve been excluded. It’s the power of the Games that makes this possible. Now we have to ensure that it all continues.”

Boycott, described by Mayor Johnson as his and London’s  “food champion,” arguably has the most at stake in the looming aftermath. The Olympic planners have created a legacy food board to help, and she is already working with a number of city agencies to implement, by 2016, a series of shared goals, including securing greater public access to fresh foods, improving environmental practices, ensuring food safety, and promoting the city’s food cultures. As part of that effort, public entities like police, transportation and fire brigades, and some hospitals and schools, are committing to the procurement of sustainable foods. “This will become the norm, not the exception,” Boycott declares.

She also oversees a “Capital Growth” campaign to create 2,012 new edible gardens in Britain by the end of this year—and to keep them coming. There are about 1,800 so far, tended by 60,000 volunteers. While the campaign has no formal connection to the Olympics, it extends the “greenest Games yet” theme (and was “nicked,” according to Boycott, from a similar garden campaign staged in Vancouver in 2010).

A career journalist who has also written at length about her daring youth and about her life as a recovering alcoholic, Boycott might seem an unusual choice for London’s culinary crusader in chief. Then again, Mayor Johnson is himself something of an outlier, recently creating an uproar on The Daily Show by telling Jon Stewart that New Yorkers put out by Mayor Michael Bloomberg’s newly proposed “soda ban” would find safe haven in London. And as it happens, Boycott—who was the first woman to edit a national English news daily—has also worn a farmer’s hat and mucked out a pig sty.

But her major qualification may be sheer fearlessness. In 1972, aged 21, she co-founded a feminist zine in London’s Soho call Spare Rib and found herself rubbing shoulders with Germaine Greer and Erica Jong. (The December issue that year featured the cover line: “Orgasm: have one yourself for Christmas.”) That same year, she cofounded Virago Press, a women’s imprint that continues today as a division of Hachette’s publishing group.

Boycott herself decamped early on, smitten by an American visitor to London, John Steinbeck IV, son of the Nobelist in literature. Together, they rode a motorcycle across India and went climbing in Nepal armed with 100 tabs of windowpane acid, a gift from Timothy Leary’s wife. (That adventure ended in a Thai jail.)

Many years and media jobs later, Boycott left publishing to put herself once again in the vanguard of a movement, leading the millennial surge of back-to-the-land urbanites eager to experience the raptures of growing local, seasonal foods—in her case, on land leased in Somerset.

In Our Farm: A Year In the Life of a Smallholding, published in 2007, Boycott chronicles how she and her second husband, Charlie, lost money hand over fist but gained an appreciation for the traditional values of English farming communities. The experience was a political primer as well—Boycott observed first-hand the threat to small farmers when a supermarket opened in their town.

“Running the farm and writing that book woke me up to the ironies of food,” Boycott says. “It is more necessary to survival than any other commodity, yet its production, manufacture, processing, and distribution are mired today within the opaque world of multinational companies more motivated by profit than by well-being. When the opportunity came up to run London Food, I didn’t hesitate.”

Boycott, now 61, says it’s also her job to rail loudly against the rising incidence of diet-related illness and hunger among Londoners and to engage the public in pushing for greater access to healthy, affordable food. “I believe in the power of communities to transform their lives—and how they eat—by growing their own,” she says of Capital Growth. “In the next four years, I want to see London leap ahead as the world’s leading city for urban agriculture.”

So what will she be doing on August 13? “Badgering,” she says, “more relentlessly than ever.”

Originally published on the Daily Beast

Photo: The mayor of London Boris Johnson poses for the media with a plate of food in the athletes’ dining hall during a media opportunity at the Olympic and Paralympic athlete’s village in London, Thursday, July 12, 2012. (Matt Dunham / AP Photo)