Taking on Chipotle with the Campaign for Fair Food | Civil Eats

Taking on Chipotle with the Campaign for Fair Food 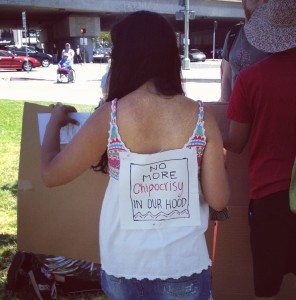 Last weekend in Oakland, protesters slowly amassed, holding signs pleading that “if Chipotle loves small farms then they should also love their farmworkers.” Primarily students and young adults, the group quickly moved down the narrow pathways of the farmers’ market along Grand Avenue to accumulate more supporters. In the end, they convened at the newly opened Chipotle food chain along Lakeshore Avenue to form a picket line of protestors.

The Coalition for Immokolee Workers (CIW), in alliance with The Student Farmworker Alliance, Just Harvest, and Interfaith Action of Southwest Florida are coordinating protests in 25 cities this week as part of their plans for a National Day of Action. The CIW have been organizing since 1993 and their allies have been walking alongside them since 2001. Together, they are working with farmworkers in Immokalee, Florida on the Campaign for Fair Food, a grassroots farmworker-led campaign to change living and working conditions for those in the fields picking tomatoes. (Florida’s tomato industry is responsible for nearly all of the fresh tomatoes grown in the U.S. between November and June.)

The Campaign applies pressure to food corporations, like grocery stores and fast food chains, in order to get them to sign the Fair Food agreement stating that they will purchase from farms that abide by a set of quality of life and living wage standards for farmworkers. Basic asks include an increase of one penny per pound of tomatoes picked, respect for workers, business transparency, and an enforced code of conduct for agricultural suppliers. These are not drastic asks, rather a human dignity not previously offered and now demanded for by a worker-run movement. For example, tomato pickers haven’t seen a salary raise in over 30 years.

Can something be termed “sustainably farmed” if their farmworkers are not treated “sustainably”? Until a group actually signs the agreement for Fair Food, which delineates the exact ethics for purchasing, we can only rely on a “he said, she said” vow.

The Campaign has a simple tactic, to leverage the buying power of customers purchasing fruits and vegetables. Large food chain stores and fast food restaurants, like Chipotle, buy huge quantities of the nation’s produce, which makes them a prime target for changing the food system through consumer demand. Customers have always had the power to vote with their pocketbooks and they have been voting for fair food, as the campaign’s successes prove. In addition to voting with their pocketbooks, consumers are sending letters asking food chain businesses to sign the agreement for Fair Food and holding peaceful protests.

Taco Bell was the first fast food chain to sign the agreement, which took four years of campaigning and boycotting before they agreed to provide fair food in 2005. Since then, the Campaign has reached YUM Brands, McDonald’s, Burger King, Subway, Whole Foods, Bon Appétit Co., Aramark, Sodexo, and Trader Joe’s. They are currently focusing on Publix, Kroger, and Ahold (international parent company of Stop & Shop) in the supermarket industry, and are applying a great deal of pressure on Chipotle in the fast food industry.

Though Chipotle works with some of the same growers that McDonald’s does, they have been refusing to sign the Fair Food agreement with the CIW, despite their hearty advertisement as an ethical eatery that purchases from local and sustainable farms that supply ingredients that are “raised with respect for the animals, the environment, and the farmers.”

“Change is an equation that includes workers, growers, buyers, and consumers,” says Jake Ratner, the community coordinator at Just Harvest, and “Chipotle’s stance represents an arrogant approach to food justice.”

Essentially, corporations have benefited from the free market and the politics that have created a history of corporate control. This has not served the laborers that bring the food to the table, and it has belied a mask of consumer choice with low prices that don’t reflect the true cost of the food being sold. In response, the CIW has established its own department of labor that sets wage standards and worker and corporate accountability. They are working one-on-one with the farms and big buyers, rather than relying on government (which has historically been too late to the table in responding to slavery in the fields, for example, and many other travesties that were supposed to be regulated). This is working towards a real sustainability that goes beyond organics and sets honest standards for both workers and buyers.

“The campaign may not be taking on the Farm Bill or global trade policy directly,” said Kandace Eloisa Vallejo, a board member at Just Harvest. “But they are taking on chain restaurants and grocery stores,” which, she said, may prove more effective in the end.

The movement for fair food and farmworker justice is growing. Many of those working in the food movement will be called to take action to show solidarity with farm labor rights as a critical component in their work towards a sustainable food system. Additional information about pending protests will be posted on Facebook and other social media.