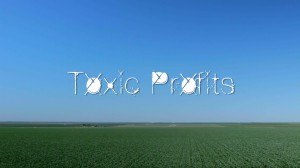 A growing number of people in the United States are becoming interested in organic food and farming, and the known and undiscovered risks of using pesticides in conventional agriculture is one of the main issues driving this movement.  Yet most people are unaware that once a pesticide is pulled off the market because it is shown to have dangerous effects on peoples’ health and the environment, we allow corporations to continue manufacturing and exporting that pesticide to other countries–even just a few feet across our borders.

This horrendous US policy is what inspired our team to create the documentary, Toxic Profits, a film exploring the use of toxic pesticides in modern agriculture and the people most affected by this practice.  I first learned about this issue as a law student doing research on the USDA’s National Organic Program, but it wasn’t until I was in Guatemala earlier this year that I saw the health and environmental harm that the global pesticide industry is causing.  My trip inspired me to bring national attention to this issue, so I teamed up with my good friend and filmmaker Nick Capazzera, and my partner, chef and sociologist Shannon Post, to start a Kickstarter campaign to raise the funds to make this film.

If successfully funded, Toxic Profits will be a feature-length film documenting the lives of those most affected by this US policy–those living in the Global South who are applying these banned and unregistered pesticides and suffering serious health effects as a result.  Countries in Africa, Asia, and Latin America use 25 percent of the world’s pesticides, yet account for 99 percent of deaths caused by these toxins.  Some 25 million farmers and agricultural workers across the globe are poisoned by pesticides each year, and poorly educated and impoverished laborers are most at risk, often applying pesticides without any training or protective clothing.

The film will also explore how this issue affects everyone, as national borders mean nothing to pesticides. Millions of barrels of pesticides travel the global marketplace and re-circulate as residue on food and fiber, as well as contaminants in global air and water currents. Moreover, the U.S. Department of Agriculture indicates that in 2010, almost 50 percent of fresh fruits and 25 percent of fresh vegetables consumed in the U.S. were grown overseas, yet the Food and Drug Administration currently inspects less than 1 percent of imports. Although the use of certain pesticides within U.S. borders is banned, these toxins may be coming back to us, in what is called the “circle of poison”.

Finally, Toxic Profits will document alternative, sustainable farming solutions to corporate-controlled, pesticide-intensive agriculture. Because the global pesticide market is increasing by billions of dollars every year, the film will highlight alternative farming methods that have proven more effective and even more profitable than the industry standard.

Please visit our Kickstarter campaign and watch our trailer.  Anything you can give is greatly appreciated, and if you can’t afford to give, simply spreading the word means just as much.

Evan Mascagni is an attorney living in San Francisco, working for a non-profit organization and a public interest law firm. Read more >