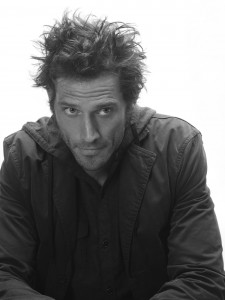 Ben Taylor, son of legends James Taylor and Carly Simon, has roots as deep in the soil as he does in music, and he uses the stage as a way to spread awareness about local agriculture. He is an avid supporter of the Island Grown Initiative, a multi-faceted project based in Martha’s Vineyard, Massachusetts that sponsors its own farm-to-school program, organizes a cadre of volunteer gleaners to harvest crops that would otherwise go to waste, educates beekeepers, and provides processing facilities for local poultry farmers.

Having heard about the program from his cousin Noli Taylor, Island Grown Schools’ Program Coordinator, Ben noted that the organization “tickled his fancy” for promoting a strong sense of connectedness within the community to the place they call home. Civil Eats recently spoke to Ben about his involvement in good food issues.

As a musician, how did you become involved with issues regarding food and agriculture?

Before I wanted to be a musician, I was looking for anything else that I could do. I’d been on a lot of wilderness excursions and I loved being in nature. When I first moved out of my home as a teenager, I went to New Mexico and worked on an organic farm out on San Juan Pueblo and that was just really cool. The guy that I worked for was this incredible natural mystic and I developed a profound respect [for him] and a different idea of what it meant to be a gardener.

What trajectory has your involvement taken since then?

What it inspired in me was a call to action socially and politically, so I try to help generate awareness when I find people in different locales doing great things and setting good examples. There’s a company called Island Grown Initiative which I raise money for and with which I work, and they run organic gardens and greenhouses and schools on island [in Martha’s Vineyard] where I’ve lived for over a decade. For the kids, the program is part of their education and they [use it to] grow food for the cafeteria. That’s really an incredible project. I think that where I can be the most helpful is in using my music to generate awareness for good. The reason I feel so strongly about it is mostly because I’m fond of nutrition and I think that the way that we generally see it is without consideration of the spirit. I believe that there’s a huge spiritual component to nutrition and I think that’s one of the biggest points that we’re missing in terms of the disconnection from our hunger.

What are the primary issues you focus on?

Local autonomy, primarily in agriculture because I like to grow food and I like farmers. But in every way, I want to fight for people to have independent businesses and communities, to rely less upon outsourcing in general. In some ways, I feel like it doesn’t make that much sense preaching to people like me because we get it. As much as I love local businesses and am against multi-national globalization, I’m also really grateful to companies like Walmart because they’ve actually introduced the concept of “organic” to way more people than could have been reached as quickly by conventional, independent grassroots means. The actual problem and solution are both broader than I could wrap my head around, and there’s always give and take, good and bad in anything. That’s why I like to focus on the microcosmic level as much as I can.

What are your goals for your work?

Primarily, I want to make a difference in music education. I want to use the skills I’ve spent a lifetime developing first to inspire kids to want to be musicians and second, to help schools and states build extracurricular music programs. That’s my primary goal in life. But in the meantime, I want to help the people in my community have a better quality of life. One of the things that I think is the most important in that is healthy food and proper nutrition. On a complete level, not just on a physical level but on a spiritual level where you understand where your food is coming from. That’s so important that, at least the people in my community, I don’t think we can afford to pay whatever the 75 or 80 percent of our food that goes into the transportation of it. We can’t afford the compromise in the quality of the food that happens.

What other projects does the IGI run?

They do an island gleaning program. A lot of the farmers on the island don’t have enough people to do their harvesting for them. There’s a lot of produce that grows on different people’s land [that doesn’t get harvested]. So the Island Grown Initiative started this process where local gardeners and farmers sign up to tell which days are going to be optimal for harvest. A couple of days a week, kids from the [Island Grown School] and a bunch of volunteers from the community get together and go help those people with the harvesting and they bring it back to the schools or other community organizations. It’s a great idea because when people are evaluating how much food there realistically is in the community, they don’t take that proportion of it into consideration.

What groups, projects, or individuals inspire you in the work that you do?

I like urban community garden projects. Really anything that brings people together around agriculture. I think that ideas people have about farming in general is outdated and antiquated and not cool. Where I live, the farmers and people who grow food are the coolest people around because they’re actually providing for the rest of the community. I may want to start an organization to promote the sexiness of gardening [and farming]. That’s the place where I’ve been working the hardest in my community. Sometimes I’ll go to towns where it will work out well that I can cross-promote my music and a local charity, but in that case I don’t have the opportunity to get as involved with those organizations and how they work specifically.

Who is in your community?

Almost all of my family lives on the same little island that I do. All my cousins and their kids, my sister and her husband and their kids, aunts and uncles. Then we’ve a lot of gardeners, landscapers, and people in the construction business. I think generally speaking, because of the fact it’s becoming more lucrative and people are getting more conscious about it, most of those industries on Martha’s Vineyard where I live are fairly green. They’re fairly conscious about what a good opportunity it is for them to do business.

Do you see your influence extending beyond Martha’s Vineyard, given that you travel a lot as part of your career?

Of course. I don’t get on stage to preach to people about what they eat. Most of what you teach, you teach by example. In the course of traveling across the country, I have so many conversations with people and I think that I can at least inspire some thought, if not change. As I travel more, I try to seek out a local co-op or business where I can support people growing transitional produce, people who are trying to make the switch to organic rather than people who have been doing it for years and years. Sometimes that’s just preaching to the choir.

Since you started your involvement in food and agriculture issues, what has changed, for better or worse?

Unfortunately, agribusiness has never been bigger and as a result of the way plants cross-pollinate, there’s not enough non-GMO crops out there. But when you look and take Temple Grandin, for example, who designed livestock-processing facilities that process half the cattle in the United States. Her whole idea was that she wanted to design a slaughterhouse where cows were calm at the end of the line. Thinking about how many cattle are slaughtered each day, that kind of design unburdens us from the weight of a lot of pain. I think she’s made as much of a difference as anybody, and that’s change for the better.

What is biggest obstacle in changing the way we grow and eat our food?

I think the biggest obstacles are going to be greed and laziness. Agribusiness being willing to sacrifice quantity for quality. There is enough land to grow enough food for all the folks. That’s all there is to it, but it’s obviously a lot more complicated.

What gives you hope?

Different trends about the way that the world is changing. The idea that kids in my own community are growing the food in their school. Corn is still a bummer. I’m still sad about corn. And really, I think the legalization and medicalization of marijuana is an optimistic trend because it’s potentially one of the biggest cash crops that the government has been neglecting for a long time.

For you, what does the ideal food system look like?

I think the best thing is if you go out and you notice that a tree has a ripe avocado on it, you go over and knock a few down, put balsamic and olive oil on it, and offer it to your mother’s brother.