The Challenge of Real Food at a Southern University | Civil Eats

The Challenge of Real Food at a Southern University

By Bonnie May and Dave Burley 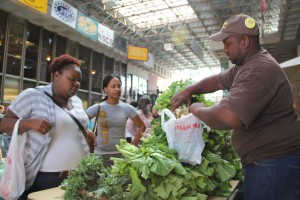 Every year, colleges and universities spend approximately $5 billion dollars on food. And the great majority of this money is spent on food that is produced far from where it is consumed using toxic chemicals that impairs the health of workers in the fields, our environment, and consumers.

Luckily, students are beginning to see themselves as more than consumers, increasingly advocating for more local, sustainable, and humane food. Since 2004, the college food service industry has revolutionized due in large part to the efforts of Real Food Challenge (RFC), a coalition of educators and university students across the nation, who desire to create a healthier and greener food system amongst higher education institutions. Through RFC, students are educating and empowering their peers, building relationships with their campus dining corporate representatives as well as small food producers, and negotiating the shift from industrial food dollars to local food dollars with these different stakeholders.

Our School, Our Food

While there was initial interest from the Aramark representatives, they quickly became reluctant and unwilling to meet the students’ goals. Although they met with the students and verbally supported eventually getting local produce, Aramark placed many restrictions on getting that local food into the cafeteria. For example, not only did they refuse to meet with community farmers to discuss options and establish a working relationship (something that RFC considers essential to a fair and sustainable local economy), but also, they did not want to form direct contracts with the farmers. Selling through distributors, as Aramark mandates, would nullify any income gains for the farmers.

Realizing the hesitation of a large corporation to change their operations, we proposed a small start by getting local produce into the salad bar. Already in contact with Indian Springs Cooperative and Pointe Coupee Cooperative–two farming business in  Mississippi and Louisiana, respectively–we worked to supply local produce to the University’s cafeteria. Additionally, the fact that our partners are minority farmers meant that we would be addressing the link between social and environmental justice as minority producers have faced systemic discrimination for a long time, especially in the South.

Nonetheless, as relationships between Aramark and Reconnect students became tense, we decided to take a break from negotiations. Reconnect garnered the help of students in Dr. David Burley’s graduate class in Applied Environmental Sociology and decided to focus more on educating the student body about food system issues  (we engaged in educating the campus about a broad spectrum of food system issues–labor, local economy, environment and health–not just nutrition). Students from Burley’s class spoke in classes across campus and developed attractive educational materials like fliers, information cards, and pamphlets.

Beyond such curricular developments, and with advice from Darlene Wolnik, an experienced market consultant, we decided to host a University farmers market on Oct. 24, 2011–the first national RFC Food Day–in order to cultivate a more hands-on approach to learning about food issues. In concert with education, it was in coordinating the market that Burley’s class was instrumental in assisting Reconnect. The group had recently lost some active members to graduation and Burley’s class helped take some of the pressure off of the remaining students while being able to attract new members through the educational activities and the farmers market.

As a result of the hard work of Reconnect and the students in Burley’s class, the market was a huge success. Students enthusiastically participated in surveys, conversed with farmers, bought sustainably grown produce, and snapped pictures for a visual petition in which they wrote, on a dry erase board, their reasons for wanting “real food.”  Also, the farmers, believing that college students would be more partial to pizza than mustard greens, were pleasantly surprised to sell nearly all of their products. But perhaps the greatest joy was hearing from the participating farmers that they made roughly double as much money as they normally do at the New Orleans farmers market, a market that they regularly attend about an hour south of SELU.

Since 2011, the RFC-SELU partnership has expanded, and currently, we host two farmers markets per semester at the University. We even developed a student internship program within our Sociology and Criminal Justice Department for one talented student to manage the market each semester.

As for Aramark, due to recent corporate policy changes at their headquarters in Philadelphia, PA, they have ceased all communication and collaboration with students at universities across the country, including SELU students (this cessation by Aramark did not start with SELU, it was an order from their corporate headquarters to ALL of their university managers, irrespective of SELU).

In order to raise awareness of such injustices, youths involved with RFC participated in a campaign called “Get Real, Aramark” on April 10, 2012. Through this day of action, students tabled at quads and popular campus spots, and flooded Aramark’s Higher Education executives with calls, voicemails, and e-mail messages.

Although the Aramark conflict remains unresolved, we at Reconnect hope that one day, our vision will be accepted. Our food ought to come from local sources if there is ample supply and eager growers. We shouldn’t have to fight for the food that we purchase. There is no need to justify that the money we spend on food should be supporting local farmers who are trying to grow food that is healthy for our land, water, air and our bodies. Hopefully, one day we won’t have to.

Bonnie May is a graduate student in Applied Sociology at Southeastern Louisiana University. She is beginning a term as a Regional Field Organizer with the Real Food Challenge and has been involved with the group since early 2011. She has also served as president of Reconnect at Southeastern since 2010. David Burley is an Assistant Professor of Sociology at Southeastern Louisiana University who is very interested in the potential to create social, economic, and ecological change through "good" food. Read more >