Detroit: A Tale of Two… Farms? 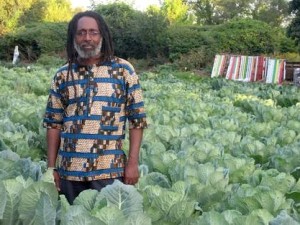 A recent article in The Wall Street Journal celebrated the Hantz Farms project to establish a 10,000 acre private farm in Detroit. The project hinges on a very large land deal offered by financial services magnate John Hantz to buy up over 2,000 empty lots from the city of Detroit. Hantz’s ostensible objective is to establish the world’s largest urban mega-farm.

I say “ostensible” because despite futuristic artists’ renderings of Hantz Farms’ urban greenhouses, presently John Hantz is actually growing trees rather than food. The project website invites us to imagine “high-value trees… in even-spaced rows” on a three-acre pilot site recently cleaned, cleared and planted to hardwood saplings. These trees, it seems, are just a first step in establishing a 200 acre forest and eventually–pending approval by the City Council–the full Hantz megafarm.

In the short run, the purchase by Hantz cleans things up, puts foreclosed lots back on the tax rolls and relieves the city of maintenance responsibilities. If the tree farm expands, it could provide a few jobs. In the long run, however, Hantz hopes his farm will create land scarcity in order to push up property values–property that he will own a lot of.

The Hantz Farms project openly prioritizes creating wealth by appreciating real estate rather than creating value through productive activities. If successful, the urban mega-farm will clearly lead to an impressive accumulation of private wealth on what was public land. It is less clear what this will mean for the low-income residents of Detroit.

Despite two years of glowing national press coverage, not all is going smoothly with the project. Under Michigan’s Right to Farm Act, the Hantz megafarm would pass from the jurisdiction of the city to that of the state. Many in the city are reluctant to lose control over such a big chunk of real estate. When friction on the issue developed between the Administration, city offices and the public, the Hantz negotiations moved quietly out of the public spotlight. But the wheels kept turning…

In a June memo to the Detroit City Council, the City Planning Department complained that:

It has come to our attention, due to inquiry from the media, and communication from a representative from Hantz Farms that the Administration is proposing to sell property to Hantz Farms or some subsidiary for a project on the east side of Detroit. Our office has not received any formal information from the Administration regarding such a proposal; therefore, we do not know with certainty the scope of the project or whether or not it complies with current zoning and/or other City codes.

The potentially massive transfer of public assets to private ownership (at a cleanup cost of $2 million to the city) has led many residents to call the Hantz deal a “land grab.”

Though the scale is unprecedented, does this real estate project really have anything in common with the brutal, large-scale land acquisitions sweeping Sub-Saharan Africa and Latin America?

Land grabs in far-off places occur when governments allow outside investors to push subsistence farmers and pastoralists off massive swathes of tropical farm and range land to establish mega-plantations of palm oil or sugarcane for ethanol. Despite the hype, very few of these projects actually grow any food. Often the land grab is simply about investing in real estate. Researchers studying the global phenomena have not yet found any benefits for local communities resulting from these land grabs. On the contrary, uprooted from land and livelihoods, poor rural people are forced into the option of last resort: migration.

Notwithstanding, from Goldman Sacks and the Carlyle Group to university pension funds, holders of big money are anxious to put their wealth into land, at least until the global recession blows over. Cheap land, devalued by economic and post-industrial recessions, is literally up for grabs. Once acquired, the easiest and most effective, low-cost way for big financial dogs to quickly mark their newly-acquired territory has been to plant trees–trees require little maintenance and if global carbon markets ever really kick in, could pay dividends.

As Susan Payne, CEO of Emergent Asset Management has bluntly stated, “In South Africa and sub-Saharan Africa the cost of agriland, arable, good agriland that we’re buying is one-seventh of the price of similar land in Argentina, Brazil and America. That alone is an arbitrage opportunity. We could be moronic and not grow anything and we think we will make money over the next decade.”

Whether the objective is to safeguard wealth, speculate on real estate, accrue water rights, bet on carbon credits or actually plant food or fuel crops, the point of a land grab is to leverage financially-stressed governments in order to acquire large areas of public land under a convenient global pretense (e.g., cooling the planet, feeding the world or ending the world fuel crisis). This supposedly benefits the planet by enriching few and impoverishing many. Detroit’s 2,000 city-owned lots (now on sale at $300 each), coupled with a food security discourse, fits some of the land grab parameters.

But like most places around the world, there are people living in the land of Detroit, and not all residents are happy with Hantz’s plan–which is probably why he has worked behind the scenes, avoiding Detroit’s Urban Ag Work Group, the City Planning Commission, and the Detroit Food Policy Council. While some residents support the Hantz forest, others–like those working with D-town Farms, who are already very busy growing and distributing food–don’t believe the hype. They are opposing the Hantz deal on moral, political and economic grounds. Malik Yakini of the Detroit Black Food Security Network noted that he was anxious to participate in more active opposition to this land grab, and that given the Administration’s disregard for the work of the Urban Ag Work Group and the City Planning Commission, the sale of the land to Hantz undermines real democracy.

These are strong words coming from one of Detroit’s leading food security advocates. When one looks at the trajectory of D-Town Farms and the Detroit Black Community Food Security Network, what appears as indignant opposition is really a fundamentally different logic for addressing the health, education and general welfare concerns of Detroiters living in the underserved neighborhoods the city refers to as blighted neighborhoods.

The Detroit Black Community Food Security Network is a coalition of community groups that focus on urban agriculture, policy development and co-operative buying. They have been farming in Detroit since 2006, pioneered an 18-month effort to formulate a city-wide food policy adopted by the City Council in 2008, and researched and proposed the model for the current Detroit Food Policy Council. They have helped grow an extensive network of gardens and buying clubs to address fresh food access and employment challenges in Detroit’s underserved neighborhoods. Throughout, the Network held public meetings and worked extensively with city leaders, local business, churches and neighborhood organizations, as well with Wayne State and Michigan State University. The seven acre D-Town Farm is a hub in an extensive community-based effort to turn the local food system into an engine for local economic development, owned and operated by those who are most adversely impacted by the lack of fresh food access in Detroit’s underserved neighborhoods.

But recognizing that Hantz Farms follows a speculative and private real estate logic and seeks to concentrate wealth, while D-Town Farms follows a community livelihoods logic that seeks an equitable distribution of opportunities and resources, still barely touches the surface of the deep differences in demography, culture, socio-economic status and political orientation of the two urban farming projects.

At the center of this tale of two farms, lies a contentious global question just beginning to resurface in the United States these days: the land question.

Land–rural or urban–is more than just land; it is the space where social, economic and community decisions are made, and it is the place of neighborhood, culture and livelihoods. It is home. Therefore, it is more than just a “commodity.” While John Hantz’s stated objective is to produce scarcity of the land as a commodity, residents living in the lower-income homes of post-industrial Detroit deal daily with scarcity of health, education and basic public services to which they are entitled. The transformation of these public goods into private “commodities,” coupled with their scarcity has not resulted in any improvement for residents. Market demand and human needs are not the same, and one does not necessarily address the other. Driving up the price of land in underserved neighborhoods may well put the city on the road to gentrification, but it won’t help solve the challenges facing the majority of Detroit’s citizens.

There are many notable, socially and economically-integrated projects in Detroit that are already improving livelihoods, diet and incomes through urban farming. It is difficult to see how these can flourish in the shadow of a mega-project designed to price low-income people out of their own neighborhoods. While private sector initiatives need to be a part of any economic development strategy, unless the City’s democratic public institutions can find positive ways to address Detroit’s land question, it runs the risk of reproducing a classic land grab–with all its disastrous consequences.

Eric Holt Gimenez, Ph.D. is the Executive Director of Food First/Institute for Food and Development Policy. A university lecturer and agroecologist with 30 years experience in Latin America, Africa and Asia, he is the main author of a new book on the world food crisis: “Food Rebellions: Crisis and the Hunger for Justice” from Food First Read more >