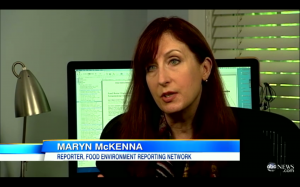 Bladder inflections affect 60 percent of all American women, with a rising number resistant to antibiotic treatment. Now researchers looking into the cause of the mysterious drug resistance have found evidence that it’s coming from poultry treated with antibiotics, according to a joint investigation by the Food & Environment Reporting Network and ABC News.

The investigation, which aired on ABC’s Good Morning America, highlights how the overuse of antibiotics in animal agriculture has made it more difficult to treat these painful, long lasting, and recurring infections because one course of antibiotics no longer works. The cost of treating the disease is estimated at $1 billion annually.

“A growing number of medical researchers say more than 8 million women are at risk of difficult-to-treat bladder infections because superbugs–resistant to antibiotics and growing in chickens–are being transmitted to humans in the form of E. coli,” writes ABC Senior National Correspondent Jim Avila.

FERNnews Reporter Maryn McKenna looked into the studies, which revealed the link between human illness and the overuse of antibiotics in food animals. Amee Mangus, epidemiologist at McGill University, found that the E.Coli responsible for bladder infections closely matches the bacteria found in retail chicken—and those bacteria have a high level of resistance. “We’re particularly interested in chickens,” she said. “They in many cases are getting drugs from the time that they were in an egg all the way up to the time that they are slaughtered.” McKenna goes into more detail in a story that appears here on TheAtlantic.com.

In addition to the American Medical Association, the World Health Organization and other organizations warning against the overuse of antibiotics, the Washington Post yesterday published an editorial highlighting the problem. This comes on the heels of an editorial by the Post last week on the same topic, entitled Meat and ‘Superbugs’.

The chicken industry maintains that human overuse of antibiotics should also be considered in the discussion and that no study has definitely proven the link between a person’s infection and chicken they ate. But researchers counter that experiments to prove such a link would be unethical because it would mean potentially infecting a subject with the disease.

The story will be airing again this evening on World News Tonight. You can watch the full report on ABC News and here: