Meat on Drugs, Stop the Superbugs 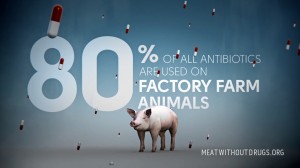 Antibiotics use is widespread in the production of livestock, helping to create “superbugs,” and aggravating the public health problem of antibiotic resistance.  To address these issues, Consumers Union, the policy and advocacy arm of Consumer Reports, in a new report released today, “Meat on Drugs: The Overuse of Antibiotics in Food Animals and What Supermarkets and Consumers Can Do to Stop It,” calls on supermarkets to stock only meat and poultry raised without antibiotics, and urges consumers to buy these products.  Consumers Union is asking Trader Joe’s to lead the transition by selling only meat and poultry raised without antibiotics.Antibiotics, once called miracle drugs, may not be miraculous any more.  With widespread use of antibiotics, many bugs have become immune to their effects. Doctors and scientists have cautioned that we must be much more careful in our use of these valuable medicines lest they lose even more of their effectiveness against deadly bacteria.

However, the biggest user of antibiotics in the United States today is not the medical profession, but rather the meat and poultry business.  Some 80 percent of all antibiotics sold in this country are used not on people but on animals, to make them grow faster or to prevent disease in crowded and unsanitary growing facilities.

Consumer Union believes that to preserve antibiotics for treatment of diseases like pneumonia in people, use on animals must be drastically reduced.  We think the most direct way to tackle this problem is at the supermarket.  Consumer Reports sent shoppers to 136 stores in 23 states, belonging to the 13 largest supermarket chains, to see what kind of meat and poultry products raised without antibiotics are offered and at what price.

What they found is encouraging. The shoppers found that one chain, Whole Foods, is already offering nothing but meat and poultry raised without antibiotics.  Several others–Giant, Hannaford, Shaw’s, Stop & Shop, Publix, and Trader Joe’s–had broad selections of these products.  At only four chains were shoppers unable to find any organic or other products raised without antibiotics: Sam’s Club, Food 4 Less, Food Lion, and Save-A-Lot.

Consumer Reports found broad public support for change. In a nationwide poll, 86 percent of consumers indicated that they thought that meat raised without antibiotics should be available in their local supermarket.

We’re therefore excited to launch our new Meat Without Drugs, Stop the Superbugs Campaign with a companion website, www.MeatWithoutDrugs.org, and a new video in partnership with www.FixFood.org, a social media project of Food, Inc. Director Robert Kenner, narrated by actor Bill Paxton. Take a look at the video and then help us take action to change our food system.

Consumers, and the supermarkets they shop at, together can help solve the problem of antibiotic resistance, a problem that has eluded government regulators for more than four decades. Together we can say no to meat on drugs and stop the superbugs.

Jean Halloran is Director of Food Policy Initiatives at Consumers Union, nonprofit publisher of Consumer Reports. In her 28 years at Consumers Union she has led many projects on food safety, sustainable consumption and trade issues. She is currently responsible for developing policy and staff initiatives on biotechnology, mad cow disease prevention, mercury in fish, and bacteria in meat, poultry and produce. Read more >