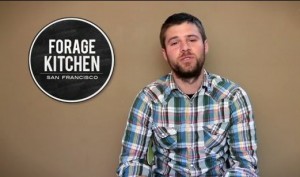 After the Underground Market was shut down in July 2011 by the San Francisco Department of Public Health (DPH) because its sellers were not compliant with local and state regulations, small food businesses took a hit. Now Underground Market founder and creator of ForageSF, Iso Rabins, is attempting to help these businesses go legal with Forage Kitchen.

Advertised on ForageSF’s website as a “hub” for foodmakers, Forage Kitchen–the first co-working space for food–will serve as an incubator for new, culinary businesses as well as a venue whereby professionals and non-professional chefs alike may hone their skills. That is, if they get their start-up funds.

Through Kickstarter, Rabins launched a campaign on May 15th, pledging a funding goal of $150,000. With 10 days left to go in the challenge, Forage Kitchen gained 584 backers, raising over $49,000. The stakes are high as the fundraiser is all or nothing: if Rabins fails to achieve his goal, then Forage Kitchen must forfeit all of the donations pledged.

“If you are starting a business, we’ll give you a home. Office, kitchen, business support, equipment rental, prep help, dish washing, all in one place… More than a kitchen, a community of makers working side by side to create something special,” the project’s Kickstarter page states.

As exemplified by the closure of ForageSF’s Underground Market, state legislatures currently struggle to determine how, exactly, to integrate this burgeoning, homemade food revolution with pre-established health codes, sparking, in some cases, the development of “cottage food” laws.

A “cottage food” law, in essence, is a piece of legislation employed by a state government to establish a legal arrangement for low risk food production prepared at a home residence. Essentially, this means that a new category of food production called a “cottage food operation” would be formulated, allowing certain types of “non-potentially hazardous foods” to be sold out of a residential kitchen. By definition, non-potentially hazardous foods are unlikely to grow harmful bacteria or other toxic microorganisms at room temperature. These items include jams, toffee, granola, and breads without cream, custard or meat fillings.

Conversely, states that have yet to pass such laws simply prohibit home food processors from producing food products from home for sale to the public. In these cases, a licensed commercial kitchen must be utilized, which may cost up to $2,000 per month–a large expenditure, particularly for hobby food producers who desire to make a bit of supplemental income.

In order to loosen regulations for small, home-based businesses and thereby foster the development of a more localized economy, the Sustainable Economies Law Center (SELC)–an Oakland-based organization, which was founded in 2010 by attorneys Janelle Orsi and Jenny Kassan, recently partnered with Los Angeles Assembly member Mike Gatto to introduce the California Homemade Food Act (AB 1616), a “cottage food” bill that would legalize the sale of certain foods produced in home kitchens.

Under current state laws, it’s a misdemeanor for Californian home artisans to sell their goodies in the open marketplace, as the law dictates that any foods produced for sale be prepared in a certified kitchen or food facility using commercial-grade equipment that is inspected by the Health Department.

The bill, which was authored by Gatto, passed out of the California State Assembly on May 29, advancing to Senate review, and was consequently amended as of May 3.

Yet while politicians and health officials bicker about the legality behind these “cottage food” laws, retailers increasingly argue that the bills will devastate their financial standing as at-home bakers could sell their products at tremendously discounted prices, thus attracting their consumer base.

In an interview with reporters Shawn Drury and Andrew Moore on February 22 at West Ashley Patch, founder of Buttercream Bakehouse Karrie Daze said that retailers and at-home bakers ought to abide by the same safety rules.

“It’s a public safety issue,” Daze said. “We deal with things that are potentially hazardous and things that need to be regulated. If they want to bake from home they need to get a legal kitchen.”

By creating Forage Kitchen, Rabins hopes to precisely address such fears. In addition to providing a certified kitchen space for up-and-coming home food producers, the space aims to provide space for beer brewing, cooking classes, meat curing, and a rooftop garden, as well as business consulting and shared office space.

Sophie Lena Salmore is the Founder of the Seedling Project, a Farm-to-School program that provides opportunities for women and girls to experience food systems through an original curriculum, created and taught by students for students. Sophie also serves as the Editor-in-Chief of the UltraViolet, Marlborough School’s leading student publication. She is interested in exploring the intersections between environmental risk analysis and media law in the context of regulating agriculture and protecting human health and the environment. Read more >