Berkeley Group Has Plan to Fix School Food in Oakland 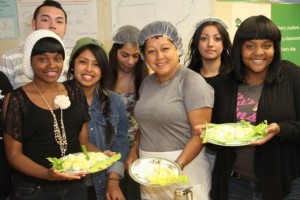 The meeting was held in San Francisco earlier this week at the offices of SPUR, a nonprofit created to promote good planning and good government. The focus of the discussion: an ambitious plan to overhaul Oakland Unified School District‘s inadequate and antiquated school food service. But the driving force behind what could be a model program for re-imagining school lunch in large school districts around the nation is a Berkeley-based nonprofit that has quietly been rethinking school lunch for many years.

No, not that nonprofit. The Center for Ecoliteracy recently released a detailed feasibility study that, if implemented, would amount to a massive makeover for the OUSD school food program. It includes recommendations for a newly outfitted, green central commissary with a 1.5-acre edible farm in West Oakland, refurbished existing kitchens, and the development of 14 school-based community kitchens dotted throughout the school district, which serves 38,000 students at 101 schools, 70 percent of whom are eligible for free or reduced-price lunch. The community kitchens are envisaged as places where budding edible entrepreneurs and local organizations with a food focus could work, for a fee, during after-school hours.

On May 23 the OUSD board approved a $1.5 billion facilities master plan with a unanimous vote, recognizing the need to upgrade all existing school sites to contemporary standards, including radically improving nutrition services facilities throughout the district. This Wednesday, the OUSD board discussed a proposal to place a $42 million bond initiative on the November ballot in support of realizing part of the plan to better nourish children in Oakland schools. A voted is expected June 27, according to OUSD spokesman Troy Flint.

When project director Zenobia Barlow, the Center for Ecoliteracy’s cofounder and executive director, scouted around for a school district that was well placed to consider such a radical rethinking of the school cafeteria, she realized she didn’t have to look any further than neighboring Oakland. Barlow wanted to work with a large, urban school district with a significant need, where school meal decisions are made on a district level, and where district-wide innovation and change would be welcome and could serve as a model for the nation. 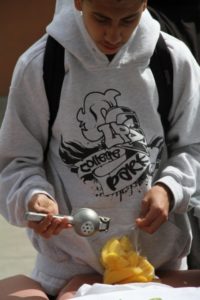 Oakland met all those criteria. It also had a new superintendent, Tony Smith, who exhibited a commitment to innovation and equity that Barlow admired (even if his hands were tied on the money front), and an award-winning nutrition director, Jennifer LeBarre, who had worked her way up through the ranks and consistently made changes to improve school food in a district with scant resources to do so. And Barlow knew that an active parent group, the Oakland School Food Alliance, was also on a mission to improve school food across the district.

It also helped that all parties recognized the impact school food reform can have on academic achievement. “Other school districts say that they cannot afford to concentrate on school meals because their attention and resources are focused on closing their achievement gap,” noted Barlow.

Not this group. “It was the perfect storm of people to bring about change,” said Barlow. “We knew we had the leadership and buy-in, both from within the district and in its surrounding community, to make an investment of this nature worthwhile.”

Finding the money, of course, in which to implement sweeping change, is another matter. That’s where the bond measure could kickstart the commissary and cafeteria campaign.

The center’s feasibility study for improving school food in Oakland cost $200,000, and was funded by the TomKat Charitable Trust and the S.D. Bechtel, Jr. Foundation. (Kat Taylor and her husband Tom Steyer founded the Oakland-based community lending institution One PacificCoast Bank.) The nonprofit center, housed in Berkeley’s David Brower building, has received follow-up funding from both granting groups to work with the district on implementing the recommendations, including identifying potential funding sources for the community kitchens, helping to facilitate a nutrition advisory committee, and providing other, as-needed services to implement the master plan.

While Berkeley schools have garnered international attention for widespread reform in the cafeteria, the district is a relatively small one and it has received significant financial support from within the district and through the foundation and groundbreaking work of restaurateur and school food reformer Alice Waters. 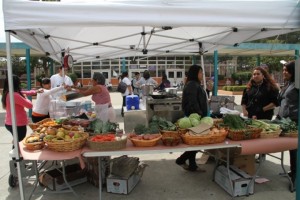 In contrast, neighboring Oakland has slowly but steadily been making changes to improve school food for its students. Nutrition services director LeBarre has overseen numerous improvements in meal programming—including banning soda before the state mandated such action, outlawing trans fat and high-sodium food, introducing “meatless Mondays,” universal breakfast, and increasing local purchasing, particularly produce. There are also 67 salad bars in cafeterias, 37 schools participate in the nutrition program Harvest of the Month,  and 22 farmers’ markets after school. LeBarre works in a foam-free environment, has reduced chocolate milk to just once a week, and is trying to rid her district of the dreaded spork, a cafeteria implement that few think enhances the eating experience.

All this, and yet LeBarre would be the first to concede the district has a long way to go. She battles significant obstacles to bringing about change, and not just economic ones: fewer than one in four Oakland schools has a working kitchen, even in schools with kitchens, most of the equipment is so old it no longer works, some kitchens don’t even have a sink, making installing a salad bar impossible. It’s a sad reality that many of the 300 food service workers at Oakland schools do little more than rip the plastic off pre-packaged, processed foods and pop them in the microwave.

But when LeBarre looks ahead ten years from now, she imagines checking in at the central kitchen where fresh, made-from-scratch food is cooked for the entire district using food from the farm out the back door. With the help of the Center for Ecoliteracy, LeBarre can see a future when people flock to Oakland, just as much as to Berkeley, to find out how to fix school food around the country.