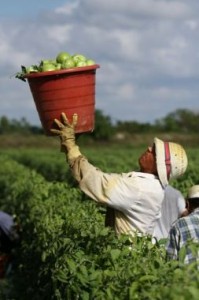 Rita has worked for the same Missouri-based pork processing company for 13 years. And yet she feels like she could lose her job at any time. If this 49-year-old mother of four is late for work by as little as five minutes, that’s one strike. If she takes more than her allotted seven minutes to race to the bathroom and back, that’s another strike. Three strikes is all it takes.

Rita (not her real name) cuts pork on a line she says has sped up considerably in recent years. The factory has reduced its staff, but demands the same amount of work from the employees that remain. She has to move fast, with a sharp knife, on her feet, for eight to 10 hours a day. “I’ve never seen so many people with heart problems,” she said of her co-workers over the phone recently. “I think it’s because of the stress. Where there used to be four of us, now there are two people. [The managers] say, ‘You all can do this.’”

In recent years, some workers have started talking about the conditions they face and trying to organize for better ones. Whenever this has happened, the company takes two approaches, Rita tells me. They start with a small raise (most meatpacking workers make a dollar or two more than minimum wage) to calm everyone down. If that doesn’t work, they’ll start firing people. Through all this, Rita has stayed on at the plant. “There are no other jobs,” she says.

Like farm work, meatpacking and other food processing work has become a last resort in this country. And while the harsh conditions Rita describes don’t apply to everyone working in her sector, they’re not atypical either.

But getting an industry-wide view of the type of challenges food workers face hasn’t been easy. That’s where a new report called  “The Hands that Feed Us,” which is  based on a comprehensive survey of over 600 workers from around the food industry (and nearly 50 employers), comes into the picture. Conducted by the Food Chain Workers Alliance, the survey puts Rita’s story in full context and shines a bright light on the often invisible people behind our food. 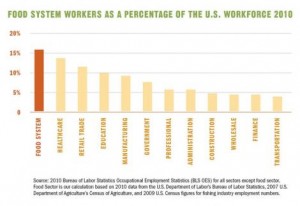 The Hands that Feed Us looks at five aspects of the food industry — food production, processing, distribution, retail, and service — and is filled with data and policy recommendations. Collectively, these five arenas sell over  $1.8 trillion in goods and services annually, accounting for over 13 percent  of the U.S. gross domestic product. And yet front-line workers in the food chain — the ones not in management or office positions — earn a median of $18,889 a year.

To put it another way, 20 million people — or one in five private sector workers — are working as we speak to make sure we get fed. And yet, as the report makes clear, they can’t always feed themselves or their families. It reads:

Ironically, food workers face higher levels of food insecurity, or the inability to afford to eat, than the rest of the U.S. workforce. In fact, food system workers use food stamps at double the rate of the rest of the U.S. workforce. They also reported working in environments with health and safety violations, long work hours with few breaks, and lack of access to health benefits.

At a time when many Americans are thinking critically about the environmental and ethical sustainability of their food, The Hands that Feed Us is a big step in a larger effort to integrate the discussion of the human element into the burgeoning food movement. And the coalition behind the report — a member organization made up of 14 groups ranging from the Coalition of Immokalee workers (two leaders of which were recently recognized by the Natural Resources Defense Council Growing Green Awards) to the Restaurant Opportunities Centers United — hopes it makes waves. Or, at the very least, gets people to widen the scope of what it means to “eat ethically.”

Lo is aware that it’s a jump for many eaters to go from thinking critically about where or how their food is produced to who produced, packed, prepared, and served it. But she points out that both problems stem from the same move toward consolidation and industrialization. The report doesn’t mince words either. It says:

Intense corporate conglomeration in every segment of the food chain has greatly diminished the quality and biodiversity of our food. In interviews, small and mid-size food enterprises reported that market consolidation has also created unsustainable competition for them. Corporate consolidation has also contributed to unsustainably low wages and benefits for food  system workers, in both large corporations and small to mid-size businesses struggling to compete.

That through-line between ecosystem health and human health is the clincher, added Lo, in a recent phone conversation: “The industrialization of our food system has disconnected people from our environment — from how we treat the land and our animals.” And in the case of humans, she says, “that loss of respect for animals and nature is mirrored.”

Case in point: Lo describes an ad that someone from Unite Here, a member organization in the coalition that organizes food service workers, told her about recently.

“They found an ad from a staffing agency [in a magazine aimed at food service providers], and it literally had food service workers in a vending machine. It’s like workers in the food system are almost treated like objects — like we can use them up and toss them out.” 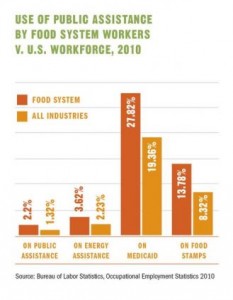 But what exactly will it take to convince eaters, many of whom are already fatigued by negotiating labels like organic, fair trade, grass-fed, and shade-grown? For starters, the Food Chain Workers alliance is partnering with the GOODMaker project to crowdsource an answer.

One of the simplest ideas is to shine a light on those employers who are doing right by their workers — such as, in the case of farm labor, the Agricultural Justice Project’s Food Justice Certified label. (Although many of the smaller business owners the report’s authors spoke to admitted that cutting labor costs had been a core strategy for staying in business as their industries faced consolidation.)

The report also points to the importance of sick days and health insurance as one way to highlight the connection between self-interest and public health. As Lo puts it, “the conditions for food workers impact food safety. Seventy-nine percent of food workers don’t have or don’t know if they have paid sick days. And we found that half of the workers reported they are going to work sick. Then they’re handling food — from the farm to the retail to the food service level.”

I’ve written about the issue of sick days, and healthy workers in general, and there is obviously much more that a healthy, empowered employee can/will want to do to keep our food system safe than a sick, overworked one. Case in point: I spoke with a 62-year-old woman named Angie recently who stocks groceries for Walmart. She told me that she regularly sees palettes of refrigerated and frozen foods sit in the warehouse for much longer than seems safe to her. But she works an understaffed night shift, where full-time workers have been slowly replaced by part-time and temporary employees, and there is rarely anyone to report such a concern to, or fix these problems when she does see them.

While this type of compartmentalization — wherein each worker knows his one small corner of the food chain well — might be efficient, it also keeps people from advancing professionally, or having the pleasure or opportunity to think and work on a system-wide level. (As I see it, the latter can’t be undersold as a key element in a thriving food system.)

Take as the opposite example a small farmer who grows and/or processes her own food and sells it directly to eaters through face-to-face relationships. This difference explains why so many people still work their tails off to produce food on a small-scale. It’s the opposite of a vending machine — in every way. It’s also the opposite of the way Rita, the meatpacking worker from earlier in the story, told me it feels to work for her employers. “I’m not just speaking for myself,” she told me. “They treat us like animals.”