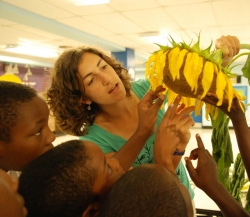 Andrea Northup grew up with cows in her backyard. But it wasn’t until she visited France, and caught a glimpse of how a whole country can revolve around a robust food culture, that she found her calling.

Northup went on to launch the D.C. Farm to School Network, a nonprofit dedicated to providing healthier school food in 200 public schools and 90 charter schools in Washington, D.C., in the fall of 2008. Since then, she’s been on a mission to transform school lunch menus one piece of fresh, locally grown produce at a time. And Northup has her hands full: The first orange food most D.C. kids can think of isn’t carrots, she says, it’s Flamin’ Hot Cheetos.

Her greatest accomplishment to date: playing a principal role in the passage and implementation of the landmark Healthy Schools Act of 2010, which makes D.C. one of the first jurisdictions in the country to provide financial incentives to schools that serve local food and offer nutrition education in the classroom.

What sparked your interest in school food?

I studied environmental engineering and community health at Tufts University, so food is right at the intersection of my interests in environmental sustainability and child health. But truthfully, it was time in France that changed my way of thinking about food. Most French people take hours each day to enjoy delicious, regional, scratch-cooked meals with friends and family. When I came back to the States, I saw reforming school food as a perfect marriage of my interests that would tie together my newfound appreciation for farm-fresh, regional food.

How has the Healthy Schools Act improved school food in D.C.?

Almost every school in Washington, D.C., is now serving [at least one] local food for breakfast or lunch every day, partly because of the extra five-cent financial incentive that schools receive for doing so from the Healthy Schools Act. Schools are also meeting higher nutrition standards, giving students more time to eat lunch, extending the amount of physical activity they do each day, and serving breakfast in the classroom (to increase participation rates). The act also created a school garden specialist position, and a garden grant program to help schools start and maintain their gardens. I know a dozen schools that were able to either take their garden to the next level, or start a new garden as a direct result of the funding provided by the act. 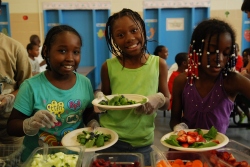 Can you point out some improvements in D.C. cafeteria menus since the network started working with school staff and local producers?

In D.C. public schools, meals include approximately 35 percent local foods on average. That’s up from probably 10 percent or less three years ago, but we’re not entirely sure because there wasn’t much information sharing back then. This is hundreds of thousands of dollars in our local food economy, and thousands of servings of fresh, regional produce on the cafeteria trays of D.C.’s youth.

For a concrete example, I helped one charter school connect with a source of pasture-raised, grass-fed ground beef from a grower in the Shenandoah Valley of Virginia. The school serves the local beef about once a month. The food service director says the beef is miles beyond the quality of what she was previously getting, and she makes the pricing work by serving inexpensive meat-free meals during the month to offset the cost.

Does being in the capital help you do your work, given your proximity to people like First Lady Michelle Obama and White House Chef and Food Policy Adviser Sam Kass?

Sam Kass and the White House pastry chef have been great; they’ve come to the D.C. Farm to School Week kick-off events, and Michelle Obama has visited a few of the schools I work with. More importantly though, they’ve been rallying the entire nation around the issue of feeding children well and getting kids active, which has driven a lot of national and local movement on the issue.

Are there other farm-to-school programs that you admire?

St. Paul Public School District‘s program is a great model of how a large, urban school district has methodically been working for decades to develop a functioning procurement system that relies heavily on local foods, and a culture of healthy eating within the schools. Their nonprofit partner, the Institute for Agriculture and Trade Policy, provides support connecting the schools with growers in the area who can meet their needs.

I am a huge fan of Vermont FEED, a partnership of three nonprofits in Vermont that help schools all over the state by providing trainings, workshops, toolkits, and educational opportunities. I always go to them for tools and resources.

Also: the Massachusetts Farm to School Project, Georgia Organics, and Farm to Table in New Mexico … the list goes on. We all get to share experiences and resources through the National Farm to School Network.

What’s next for the D.C. Farm to School Network?

I have two goals: The first is to find ways to support more small growers in our region. Right now, there isn’t the aggregation to make it feasible for small, sustainable farmers to provide food for D.C.’s nearly 100,000 meals a day. I would love to help schools pilot some programs to provide markets for them, and begin to work those types of farms into the rotation.

Second, even though we’ve done a lot of youth education, we need more programs that empower youth to truly be a part of the school food movement. The changes to school meals have been drastic over the past few years, in a good way. For students who are used to processed convenience foods, the switch to fresh, whole foods is a big one; not only do the foods taste drastically different, but they’re unfamiliar. We need to educate students about fresh, local foods through hands-on experiences that leave them empowered to take charge and demand the types of changes they want to see.

Our work will be done when students understand, demand, and enjoy farm-fresh, local foods in their school meals, and when the school meal program supports our regional food economy.