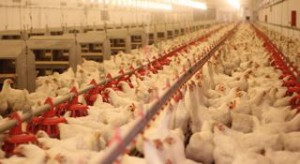 As concerns grow about antibiotic-resistant pathogens in our food, environment, and hospitals, the Agricultural Research Service is trying to figure out the best alternatives for food animal producers, who have long relied on these miracle drugs for combating diseases and boosting feed efficiency.

Though antibiotic resistance is a known consequence of antibiotic use in both humans and animals, agricultural use has come under greater scrutiny in recent years as more consumers take an interest in how their food is produced. According to the most recent estimates, around 80 percent of all antibiotics sold in the United States each year are used in food animal production.

Vitamins, phytonutrients, and probiotics are all being explored as viable alternatives, according to this month’s Agricultural Research magazine. Some of the findings will be presented by ARS researchers at an World Organization for Animal Health (OIE) conference in Paris in September.

“A number of the new technologies have direct applications as medical interventions for human health, but the focus of the symposium is animal production, animal health, and food safety,” said Cyril Gay, the national program leader for animal health at ARS, which is a U.S. Department of Agriculture program based in Beltsville, MD. “The result of this symposium will be an assessment of new technologies for treating and preventing diseases of animals and recommendations that will advance strategies for growth promotion and health in livestock, poultry, and aquaculture.”

At the BARC Animal Parasitic Diseases Laboratory, an ARS lab in Beltsville, avian immunologist Hyun Lillehoj has found that certain food supplements, probiotics, and phytonutrients can be effective in fighting off diseases like coccidiosis, a common parasitic disease. The USDA estimates that coccidiosis costs the domestic industry $600 million annually.

Lillhoj is now working to apply the same technology to develop ways to treat intestinal bacterial infections caused by Clostridium without using antibiotics, according to ARS. As part of her research, Lillhoj is working on gaining a better understanding of poultry genetics.

“My work over the last 27 years at ARS has involved trying to figure out how to grow poultry without using drugs and enhance their innate immunity,” Lillehoj told Agricultural Research. “One of those strategies is genetic improvement. We’ve been working to identify genetic markers associated with enhanced innate immunity to enteric pathogens.”

Lillehoj and her team hope their research can eventually be used to help breed birds for enhanced disease resistance, so that they can rely on their own immune systems instead of drugs. The team has also identified and patented an immune molecule called “NK lysin,” a chicken protein that kills the parasite that causes coccidiosis and other troublesome parasites.

For the past couple of years, ARS researchers have also studied whether phytochemicals derived from safflower, plums, peppers, cinnamon, and green tea can help enhance a chicken’s immune system.

Another research team at the ARS National Animal Disease Center in Ames, IA has found that Vitamin D is a promising treatment for mastitis, a mammary gland infection common among dairy cows that is currently usually treated with antibiotics.

“We hope this natural form of vitamin D will be a means to reduce antibiotic use either by using this in tandem with antibiotics and shortening the duration of antibiotic use, or as a means against some bacteria that are resistant to antibiotic treatments,” said NADC researcher John Lippolis.

ARS researchers at the Food and Feed Safety Research United in College Station, TX patented their new technology to fight foodborne pathogens in the intestinal tracts of animals. The method uses cholrate and  nitro compounds to significantly reduce or eliminate pathogens like Salmonella and E. coli O157: H7, according to ARS.

The researchers found similar results with Salmonella in turkeys: the incidence of Salmonella dropped from 35 percent to 0 and from 37 percent to 2 percent in broiler chickens.

“We found that chlorate by itself had significant bacteria-killing activity against E. coli and Salmonella, and that activity was enhanced 10- to 100-fold with addition of the nitro compound,” said Anderson. “We also found that the nitro compounds by themselves had significant bacteria-killing activity, and that activity was more persistent than the chlorate activity by itself.”

“This could be used instead of certain antibiotics that are commonly used to treat diarrheal infections in young pigs and cattle.”

As Agricultural Research noted, the demand for food animal products like meat, dairy and eggs is only increasing as developing countries expand their consumption of these items, so strategies to reduce the amount of antibiotics used in agricultural will continue to be critical. The OIE meeting in September will bring together scientists, veterinarians, and policymakers to discuss alternatives.

More on the meeting in September can be found here.