Reflections on The Perennial Plate: An American Road Trip 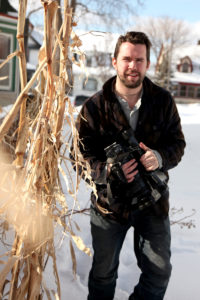 On May 9, 2011, my girlfriend and I set out from Minneapolis on a road trip across the country.  The journey was not for sightseeing, instead we were on a mission: To tell stories about “real food” in America.  From that moment on, every week for a year, we released a 5-10-minute video about sustainable food across the country for our online documentary series, The Perennial Plate. The last video from our road trip was recently released.

We haven’t just been profiling young farmers and back-to-the-landers, we have been engaging with folks who went organic because they had gotten sick from conventional food, or fished and hunted because it was their only option.  Our broad scope of stories let us encounter every type of American that was in search of good food.

Along the way, we found no shortage of people to film.  Upon our departure we called out to the interweb for ideas and were flooded with stories from across the nation.  Armed with this catalogue and our own interests in experiencing the inspiring and the unique, we set off.

We travelled 23,000 miles, across 43 states, filming almost 200 hours of footage and creating 50 episodes. This is episode the 51st episode–our season finale–a compilation of the best moments from the road. Here are a few standouts:

Catfish Noodling.  The activity of sticking your hand down a monster-like fish has been made famous by a new reality TV show, but it is still one of the craziest things I’ve seen.  A week into our journey we found ourselves in the backwoods of Mississippi faced with a family and a tradition that was very different to which what we were accustomed.  We became friends with this family despite our obvious differences (we still keep in touch to this day).  For the first time we realized that our interaction with the family whom we were filming was maybe even more important than the activity of catching the fish. We were stepping into someone else’s life for just a couple days and seeing how the world looked from their eyes. And it was fascinating. This family grew most of their vegetables, and hunted or fished for most of their protein. Yet despite this reliance on the land, they weren’t concerned with its preservation, as they dropped their beer bottles into the bottom of the lake.

J Bar L Ranch. We intended to stay just a day in this valley in Montana, but instead spent a week.  Struck by the beauty of the mountains just across the border from Yellowstone, we felt like this is how to live in the middle of nowhere.  Not only was the setting spectacular, but the ranch set an amazing precedent for raising and grazing cattle.  In an effort to mimic the bison from years ago, the cattle roam through the hundreds of thousands of acres.  Their trampled path leaves the land more fruitful and the meat healthier and more delicious.

Detroit. A lot has been written about the urban gardens of Detroit and it’s no wonder.  It’s hard not to get sucked into the dramatic and exciting scene that is Motor City.  Where else can you buy a house with an empty lot for $500? Yes, the city has a lot of problems and a lot of the developments are coming from outsiders, but still, you can’t enter Detroit without feeling its energy.  We spent our time with a man everyone called “Brother Nature.”  He had developed the multiple abandoned lots that surrounded his home into a jungle of vegetables.  Along with his wife (aptly named “Mother Nature”) they sold their greens at Eastern Market, an incredible famers’ market that pulses with energy.  Despite its drawbacks, Detroit tops our list of places to go back to.

Ohio. Some of our most valuable moments from the road were our interactions with people who were most different from ourselves.  Such was the case with the inspiring Apostolic family of 10, whom we met in rural Ohio.  They were organic dairy farmers and they took us in like family.  We not only learned about raw milk and alternating pasture, but the art of raising a family and how giving kids something valuable to do is of the utmost importance.

So what did we learn about “real food”? We learned that a lot of people in the U.S. are struggling to make ends meet and growing your own vegetables and raising your own animals makes high quality food a viable option.  We saw the impact of invasive species (including feral pigs, iguanas, Asian carp and kudzu) on a lot of habitat in this country and realized that there aren’t many answers to this problem beyond using them as a food source.

We met with migrant workers, refugees, and new immigrants to the U.S. who are working harder than we could believe to succeed in this country. We were deeply saddened by the state of food in this country, but also hopeful after seeing what wonderful work is being done to change the way we eat.  After six months on the road, one thing was clear: No matter who we met, everyone had a desire to eat good, real food.

What’s next for The Perennial Plate?  We are working on it, but you can be sure that we want to continue to tell stories about food, they just might not all be in the U.S. Expect an announcement this summer!