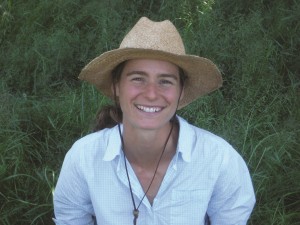 In February 2008, Zoë Bradbury left her job at Ecotrust, where she was a regular contributor to Edible Portland, to start farming on Oregon’s southern coast. Right after leaving, she wrote, “I pulled up to my new greenhouse on Floras Creek with a riot of saw-toothed artichoke divisions in the back of the truck, teased them apart into one-gallon transplant pots, and officially began my first season farming for myself, next door to my mom and sister.”

Over the next year, she kept a blog for Edible Portland called Diary of a Young Farmer. Her intention to share her experiences as she began farming has blossomed into a full-fledged collaborative book, which she co-edited, hitting stores this month: Greenhorns: 50 Dispatches from the New Farmers’ Movement.

I caught up with her to talk about the book, learn about her life at Valley Flora Farm in Langlois, and get a glimmer of what the New Farmers’ Movement is and where it’s headed.

Can you tell me a bit about the book–how you got involved, who the writers are, and why you think it’s a good read?

The idea for the book hatched about three years ago when [co-editor] Severine von Tscharner Fleming and I were at a food and farming conference together. We got Storey Publishing interested in the idea and spent the next couple of winters–during our “off” seasons–putting the book together. The essayists are from all corners of the country, and all of them are beginning farmers, meaning they’ve been running their own operations for fewer than 10 years.

When you’re just starting out farming, the heartaches and breakthroughs are so acute. It’s a rocky road for most of us. We’re short on cash, short on sleep, short on time, and long on optimism and pure buckle-down grit. A lot of the essays in this book shed light on that–some funny, some exuberant, some sad. It’s a great medley of stories for that reason, all woven together by a singular passion for growing good food. 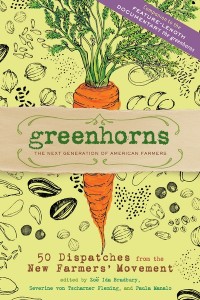 What gives you the most hope for the coming generation of young farmers?

The fact that public awareness has shifted so much in the past ten years. I remember a time when I would strike up a conversation with a stranger on an airplane, and when they asked me what I did, and I replied that I was a farmer, they looked puzzled/unimpressed/dismissive. Now when I have that same conversation, people’s eyes light up and they say, “REALLY!!!?? That’s awesome! My sister is part of a CSA farm…” or something to that effect. More and more folks are learning about alternatives to industrial food, supporting local family farms, eating more seasonally, trying kale.

Still, there’s a lot working against beginning farmers; access to capital and land are the foremost. Money and credit are hard to come by, and buying affordable land is maybe even harder. It’s why you see so many creative arrangements–non-conventional leases, incubator farms, etc.

A few years ago, you used to write your own dispatches for Edible Portland as you began farming, Diary of a Young Farmer. How has your perspective changed in the years since, and what has remained constant?

I’m in my fifth season of running my own farm now, and things have definitely stabilized—thank God! Financially, the farm is on solid footing, and the big push to build and buy all the infrastructure we needed—barns, irrigation systems, equipment—is largely behind us for now. I’m able to focus more on fine-tuning and improving my growing practices and my marketing strategies. It’s still a roller coaster–unpredictable weather, crop failures–but the ride feels less bumpy now, I think in large part because our community of loyal customers and CSA members provide such a foundation of financial and moral support. With them behind us, things feel less catastrophic than they did in the first year or two of scratching out this little farm and getting established.

I wonder about the phrase in the title “New Farmers’ Movement.” What about new farmers today has created a movement? What is the movement and what are its goals?

I imagine every single one of the essayists in this book would have a slightly different answer to this question. Personally, I think it feels like a movement because it’s not just the farmers themselves talking about these issues, spreading the message, and doing the work. It’s a larger community of eaters, advocates, policy-makers, and everyday newspaper-reading citizens who are connecting to it. People want clean, green, fair food. They want family farms, not factory farms. And the farmers in this book want to create just that kind of world.

What are you most excited about that’s growing in your fields right now?

Other than my one-year-old, who is doing a lot of her growing in our fields right now, I’m pretty excited about the new rhubarb planting. It’s been doubling in size everyday, which feels like a little nod from the plant world that things are A-OK out there.