A Growing Problem: Notes from the ‘Superweed’ Summit | Civil Eats

A Growing Problem: Notes from the ‘Superweed’ Summit 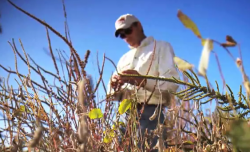 Last week, the National Academy of Sciences hosted a summit to discuss “superweeds,” or the widespread problem of herbicide-resistant weeds currently afflicting millions of farm acres across the United States.

Superweeds—the “weeds that man can no longer kill!”—have been in the news for several years. All across the Midwest and Southeast farmers have been photographed and filmed standing in fields surrounded by the giant plants. They bemoan the cost of pesticides and point to industrial rows of crops that don’t have a chance when up against feisty weeds that grow up to three inches a day.

Superweeds have been especially likely to appear alongside genetically engineered (GE) crops, which are engineered to withstand large amounts of pesticide and herbicide use. And these weeds show no sign of going away any time soon.

That’s why scientists and researchers from land-grant universities, the U.S. Department of Agriculture (USDA), and representatives from several industry and trade groups met at last week’s summit to strategize about the problem.

A few speakers boasted about the efficiency of modern-day farming and the fact that today’s agriculture requires fewer farmers on more acres. But missing from their analysis was the long list of consequences: from degradation of the environment, to health risks from increased chemical use and, ironically, superweeds themselves.

Those who did address the weeds tended not to see them as a result of that impressive modern agriculture. Take Michael Owen, an agronomist from Iowa State University, for instance. In his talk, he contended that superweeds are neither an herbicide problem nor a GE crop problem, per se, but a behavioral problem. This analysis puts the blame on farmers for overusing herbicides. Yet the resistance situation first arose when biotechnology companies pushed herbicides like glyphosate (or Roundup) on farmers as the silver bullet to weed management without educating them on the ramifications of their ubiquitous use. And the practice of using just one herbicide year after year would not have occurred if it weren’t for the aggressive promotion of the Roundup Ready line of GE crops (engineered to tolerate Roundup).

There was some talk of non-chemical solutions by Michael Walsh from the University of Western Australia, who spoke about that country’s serious problem with a weed that has developed resistance to several herbicides. Australian researchers designed a few different weed seed control methods that destroy the seed reserves, eliminating upwards of 95 percent of the seed before it is able to germinate. But it was made very clear by the U.S. farmers attending the summit that going back to traditional methods, like cultivation, would be tough. There was little mention of organic weed management techniques such as crop rotation or the use of cover crops.

Strikingly missing from the conversation that day was any talk of the next round of GE crops now in the pipeline, like Dow’s 2,4-D corn and Monsanto’s dicamba soybean, which have both been designed to be resistant to more than one herbicide at once. A full 13 out of 20 crops in the queue awaiting USDA’s approval have what are called “stacked herbicide resistance traits.”

These crops, once approved, will likely result in the use of many more gallons of herbicides and the evolution of even more powerful superweeds that will be resistant to many different herbicides—making them harder and harder to manage. Formulating new varieties of crops to withstand applications of harsher chemicals may be business as usual for these scientists and the companies they work for, but it’s an approach that ignores the underlying issue.

The final speaker at the summit was Iowa State University President Steven Leath, who said he believed that using a “land-grant approach” involving public-private partnerships will help solve this complex problem. This approach is not surprising coming from Leath; Iowa State is known for its relationships with corporations (especially Monsanto), and its agronomy department received around half of its funding from private-sector donors from 2006 to 2010. Iowa State’s campus is even home to a Monsanto Student Services Wing in the main agriculture building.

The superweed problem is one that should be attacked with preventative strategies based in weed biology and independent, interdisciplinary creativity. But partnering with biotechnology companies will likely only result in biotech solutions.

We have the opportunity to see superweeds as a wake-up call and a strong argument for pulling agriculture off the chemical treadmill to which it is bound. But to do that, public research—free of private sector influence—must be funded in order to give farmers better alternatives and to shift the focus away from the current chemical arms race against weeds.

Genna Reed is a researcher primarily focused on new technology issues within the food system for Food & Water Watch. Prior to joining Food & Water Watch, Genna was a fellow with the mid-Atlantic regional office of the EPA in Philadelphia, performing research on streams and wetlands for the Environmental Assessment and Innovation Division. Read more >