HBO has a history of tackling serious American health-care crises. In recent years, the cable network has taken on addiction and Alzheimer’s to much critical acclaim. And now the network has turned its attention to another huge health problem: Obesity and its enormous economic, emotional, social, and health cost on individuals, families, communities, and the country at large.

As Americans have gained weight in recent years, rates of diabetes, heart disease, stroke, and other obesity-related health problems have also skyrocketed. Rates of Type 2 diabetes (once known as “adult-onset diabetes”) are soaring among kids. And this is a generation of people that may well die at a younger age than their parents, largely because of medical concerns associated with excess weight.

These facts have become commonplace to those of us who have been paying attention. Still, The Weight of the Nation: Confronting America’s Obesity Epidemic serves as a clarion call to the country to take action — and fast — to combat this pernicious, complex problem that has myriad root causes.Despite the familiar territory, this viewer gives the filmmakers points for framing the issue in a fresh, visually compelling way through astute story selection. The first episode recounts The Bogalusa Heart Study in Louisiana — a landmark investigation which found that cardiovascular disease can begin in childhood. And in the final installment we meet a Nashville mayor trying to help his city get healthy and a Latino community in Santa Ana, Calif., whose members spend years advocating for a play space for their children. 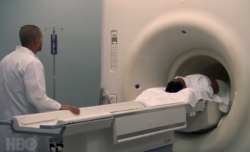 At the current rate of increase, obesity-related health-care costs are projected to exceed $300 billion by 2018.

Some critics (including those who have yet to watch the series) worry that The Weight of the Nation only fans fear, stereotypes fat folk, and doesn’t go after the real villain in the war against weight: the food and beverage industry. But from this critic’s perspective, the program doesn’t lay shame and blame at the feet of the overweight and obese people it features. On the contrary, it presents their struggles in a sympathetic and non-judgmental light, revealing how hard the body fights weight loss despite good intentions, and how current social, economic, and government systems sabotage Americans’ attempts to stay healthy.

Yes, there is the question of personal responsibility, and the films address physical inactivity and poor diet as key contributors to this problem. But there’s also healthy discussion of factors outside an individual’s control — including genetic makeup and evolutionary biology (we’re programmed for scarcity in a time of abundance), workplace changes, fast food marketing strategies, federal farm subsidies, changes in American food culture, and the ready availability of low-cost, high-calorie food.

The series also points a finger at the global corporations that are responsible for peddling the unhealthy, highly processed foods at the crux of the problem. It’s hard to imagine commercial television, hugely dependent on advertising by the makers of such food, taking on this topic in the first place.

To produce The Weight of the Nation, HBO teamed up with some major government agencies battling this spreading epidemic — the Institute of Medicine, the Centers for Disease Control and Prevention, and the National Institutes of Health — as well as the child-focused philanthropy Michael & Susan Dell Foundation, and health-care giant Kaiser Permanente.

The series doesn’t sugarcoat matters, but makes it clear that obesity-related health problems will become an unprecedented crisis with dire consequences if left unchecked. They’re also incredibly expensive: At the current rate of increase, obesity-related health-care costs are projected to exceed $300 billion by 2018.

In conjunction with the series, HBO also launched a massive social media campaign to spread the word about what can be done about these health problems, and reached out to more than 40,000 community-based organizations across the country.

Take that, obesity epidemic. And yet, as John Hoffman, executive producer of the series, noted in a discussion after a recent screening in Oakland: One of the first steps that might put a serious dent in this problem would be addressing government subsidies for commodity crops, which have made ingredients like high-fructose corn syrup cheap, accessible, and ubiquitous. He suggested changing the date of the Iowa caucus — a step that would give this farm state considerably less political power. (Such creative thinking didn’t make it into the series. But it’s food for thought — as is the hormonal defect hypothesis, detailed in a Newsweek story last week, which argues that refined sugars and grains are the major players in a problem that no amount of dieting and exercise could correct.)

Chicken nuggets are served for school lunch in the Weight of the Nation.

People can argue whether the root problem is corporations and their lobbyists, unfair government subsidies that benefit Big Ag, or cultural forces that keep many of us eating low-nutrient, high-calorie food. But most folks can agree on this much: It’s time to help kids get healthier.

One whole hour of the four-part series is focused on children. School lunch takes a hit, as does a food and beverage industry that preys on America’s most vulnerable population. As Kelly Brownell of the Rudd Center for Food Policy & Obesity notes in one episode, food marketing to children is “powerful, it’s pernicious, and it’s predatory.”

A highlight in the HBO effort is a half-hour film titled The Great Cafeteria Takeover, which runs on Wednesday. It chronicles the actions of a group of preteen reformers in New Orleans, known as the Rethinkers, who set about to improve lunch at their schools. Two other half-hour programs in the children’s series will debut in the fall.

Given the severity of obesity-related health problems and their rapid rise among kids, it looks like HBO won’t be the only broadcaster taking on a topic that has caught the attention of everyone from Michelle Obama to Ellen DeGeneres. The Hollywood Reporter recently announced that Laurie David, author of The Family Dinner and the producer behind An Inconvenient Truth, has teamed up with Katie Couric for a feature-length film about childhood obesity titled The Big Picture, which also promises to examine the impact of the food industry and government subsidies on children’s health. Stay tuned.