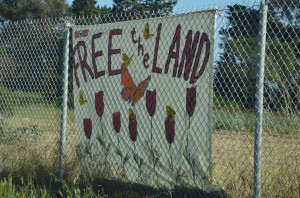 The newly established farm on UC Berkeley-owned Gill Tract will soon be empty. At the time of this writing, it is surrounded by riot police from at least 8 different UC Campus police forces. Nine have been arrested. This is the end to a standoff that began on Friday, when the police blocked farmers from entering or leaving, forcing supporters to toss food and water over the fence. In addition, the UC has filed suit against 14 individuals and 150 additional unnamed persons.

The farm began with a celebration of life, the planet and the people’s right help determine the fate of a place owned by a state-supported institution. Three weeks ago on, Earth Day, a group of 200 volunteers occupied the Gill Tract. The multi-generational crew planted two acres of vegetables, including a children’s garden, and began to offer workshops on sustainable agriculture and food sovereignty. A small encampment sprang up, but organizers insisted it be limited only to those doing the everyday work of maintaining the farm.

The land in question is a 10-acre parcel that comprises the last remaining class 1 agricultural soil in the East Bay. Despite years of community action favoring the creation of a research site specializing in urban and organic agriculture, the land is slated to be sold for development.

Even as the occupation phase ends, the farm represents a cross-pollination between the food movement’s embrace of sustainable and urban agriculture and the occupy movement’s emphasis on direct action and democratic control of resources.

This occupation is a direct confrontation with a university that, according to the occupiers, has long ignored its public mandate in the pursuit of profit. It is an attempt to seize a piece of land that is publicly owned in name only, and use it for the public good. It is an exercise in land reform, demanding that “farmland is for farming,” and insisting that because farming this land is the right thing to do, the occupiers have every right to do it. It remains to be seen whether some kind of agreement might allow the farming to continue once the occupation has ended. The land is currently used by UC researchers. Some explore agroecology while others conduct basic research on gene mutations that, if successful, will likely aid the development of GMO crops. But the tract is large enough that the occupy farm could remain while that research is conducted.

Occupy the farm is one of a handful of efforts that can reenergize a food movement that has become satisfied with its own success. Supporters of the food movement have become content to “vote with our dollars” in favor of local and organic alternatives, for small farms and farmers markets. But for all the good they do, these vibrant alternatives have not confronted the system head on. No farmers market places limits on the power of corporate agribusiness. No community sponsored agriculture program interferes with industrial farming’s ability to exert its influence on the way that agriculture is governed. Alternatives build power, but they cannot seize power from the systems that currently hold it.

Occupy the Farm represents a new way forward for the food movement, one that moves beyond support for alternatives to confront an important player in the industrial food system.  It’s a chance to vote, not with our dollars, but with our voices, for the kind of agriculture we want to create and the kind of society we want to be.

Here are some actions that Occupy the Farm has asked for in support:

Sign the online petition:  Show the UC Berkeley administration that you support the vision of Occupy the Farm – and call on them to stop police action so that the farmers may continue to farm!  Click here for the petition.

If you are an organization or group that wants to support: Endorse the collective letter of support, being signed by organizations, alliances and groups nation-wide. To sign on, please email occupythefarmletter@gmail.com.

Take more land, wherever you live: Wherever community needs are not being fulfilled and traditional avenues of change have failed, take space at the required scale to meet these needs. Occupy. Make Productive. Contest the Title.

Donate to the Farm: Click here to find a link to their online donations page, as well as a current list of needed materials.

Alison Hope Alkon is a sociologist who writes about food systems, inequalities and environmental justice. She is author of the forthcoming book Black White and Green: Farmers Markets, Race and the Green Economy and co-editor of Cultivating Food Justice: Race, Class and Sustainability. She teaches at University of the Pacific. Read more >