9 Nasty Truths About The Meals You Eat | Civil Eats

9 Nasty Truths About The Meals You Eat

Thanks to factory farming’s massive economies of scale, a lot of food today is either disgusting or cruel or disgusting and cruel. Just when people stopped talking about cantaloupes with deadly listeria, “pink slime” hit the news. And just when people stopped talking about pink slime, ground beef treated with ammonia to kill germs, mad cow hit the news. Does anyone even remember the arsenic in the fruit juice?

Food scandals are so costly to Big Food, it has repeatedly tried to kill the messenger rather than clean up its act. In the 1990s it pushed through “food disparagement” laws under which Oprah Winfrey herself was sued by cattlemen in 1997 (Winfrey said she would never eat a hamburger again upon learning that cows were being fed to cows). Winfrey was acquitted and cow cannibalism was made illegal but the US still lost $3 billion in beef exports when a first mad cow was discovered in 2003. April’s new mad cow will not help foreign trade.

Last year, Big Food introduced Animal Facility Interference laws in several states which make it a crime to “produce, distribute or possess photos and video taken without permission at an agricultural facility.” The bills also criminalize lying on an application to work at an agriculture facility “with an intent to commit an act not authorized by the Owner”–in an effort to stop the flow of grisly undercover videos. The ﬁrst facility interference offense would be an aggravated misdemeanor but subsequent offenses could be felonies.

Of course, the Ag-Gag bills, as they were quickly dubbed, are anti-free-speech and would chill both whistle-blowers and news media (who couldn’t legally even receive non-approved farm images). The bills were scorified by CNN, the New York Times, Time magazine and First Amendment and food safety activists and, luckily, were defeated in 2011. But they are creeping back.

Many farmers and agricultural professionals are miffed that the days of “it’s-none-of-your-business” farming are over. Once upon a time, consumers cared only about the price and wholesomeness of food and didn’t worry about–or videotape–its origins and “disassembly.” Now consumers increasingly want to know how an animal lived, died, and even what it ate in between. Some of the newly engaged consumers are motivated by health, wanting to avoid hormones in milk, antibiotics in beef, arsenic in chicken, and who knows what in seafood. But many are also motivated by humane concerns.

Here are some shocking facts that Big Food would like to mute with Ag-Gag and food defamation laws:

Recombinant bovine growth hormone (rBGH), injected into dairy cows to increase milk production, was created by crossing cow DNA and E. coli bacteria. Yes, that E. coli. From the start, farmers and veterinarians worried about the udder infections it causes, the resulting need for more antibiotic usage and more. “I surely wouldn’t want to eat from the hypodermic pockmarked section of the cow,” said one farming critic as early as 1994. Banned in many countries and unlabeled here, rBGH-produced milk also contains pus and a protein associated with increased prostate and breast cancer risk called IGF-1. Still, Eli Lilly, who bought rBGH in 2008 from Monsanto insists, it “safely increases productivity of dairy cows” and helps “family farm owners.”

Eggs with a side of salmonella 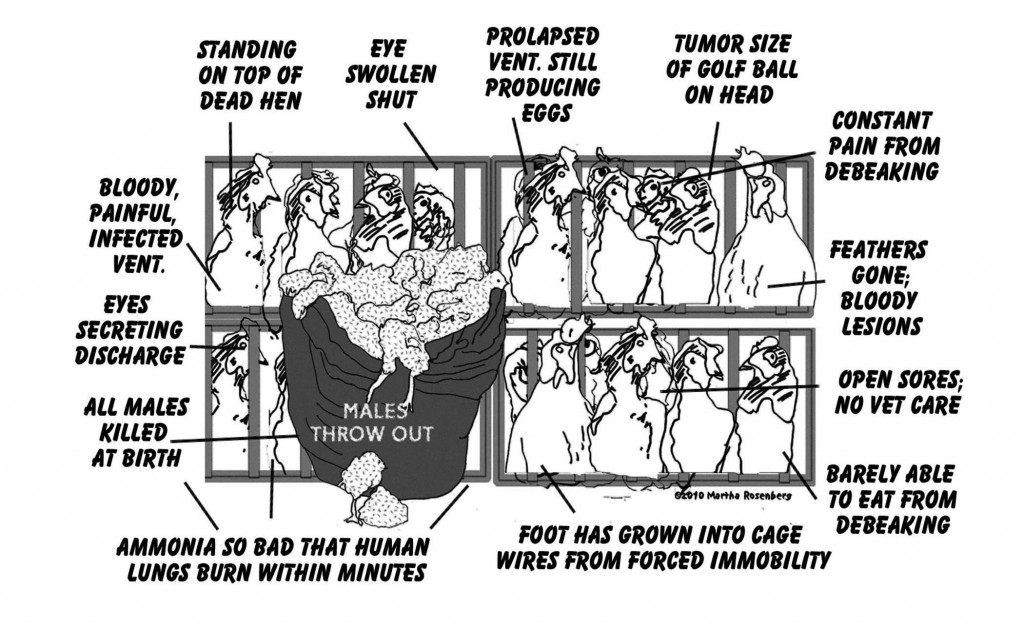 Two years ago, a salmonella outbreak caused the recall of half a billion eggs and 1,600 illnesses. Thanks to factory farming, with thousands of hens stacked over their own manure, egg operations are festooned with germs. In fact, the government found both Tyson Foods and a hatchery injecting eggs of future laying hens preventively with antibiotics to avert infections. Yum. Austin “Jack” DeCoster, to whose farms the salmonella was linked, had a 30-year history of health and safety violations. In fact, when authorities raided his Turner, Maine operation in 2009, charging him with animal cruelty, four officers required treatment for ammonia-burned lungs just from entering his barns. Yet DeCoster received no penalties for the salmonella outbreak and enjoyed a gracious retirement.

The drug store in your meat 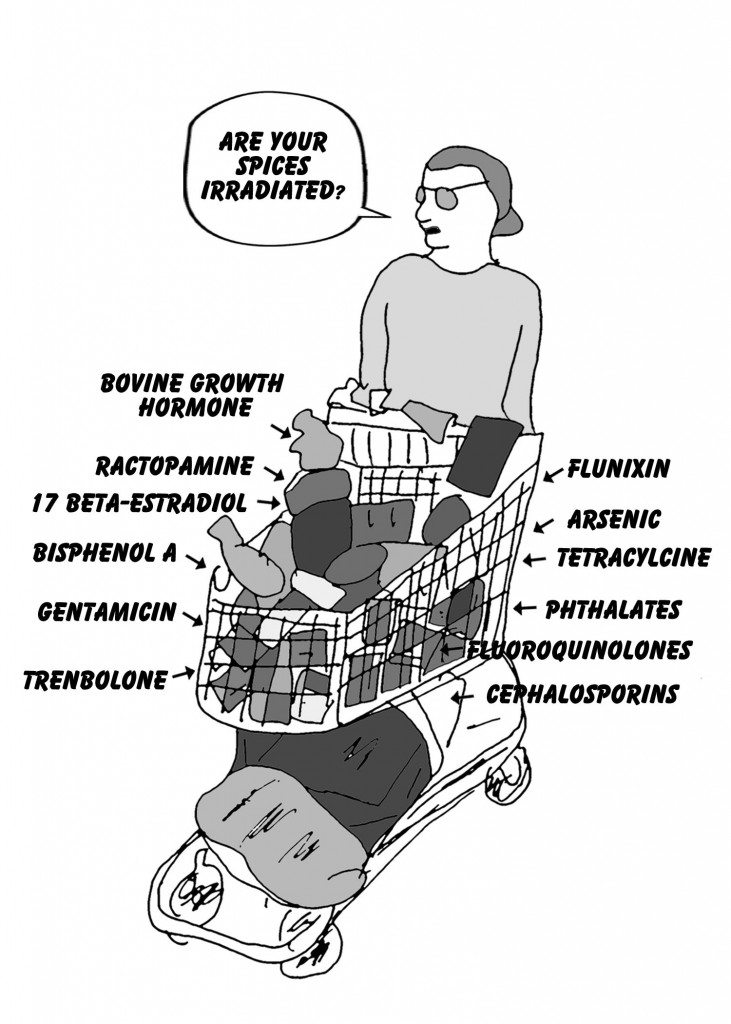 You may not have heard of Fort Dodge, Elanco, or Intervet, animal divisions of Big Pharma, but you may well be “taking” their drugs. Government safety inspectors miss residues of penicillin and other antibiotics, parasite and anti-inﬂammatory drugs and heavy metals in beef, says a 2010 Office of Inspector General report, allowing contaminated beef into food supply. For other toxins like dioxin, lindane and ﬁre retardants, inspectors do not even have “established action levels” to test for. Four plants, with an astounding 211 drug residue violations, were given a pass says the OIG report. Worse, unlike germs like salmonella or E. coli, drug and metal residues aren’t neutralized by cooking and can even turn into more dangerous compounds when heated.

“Free antibiotics” in your food and water 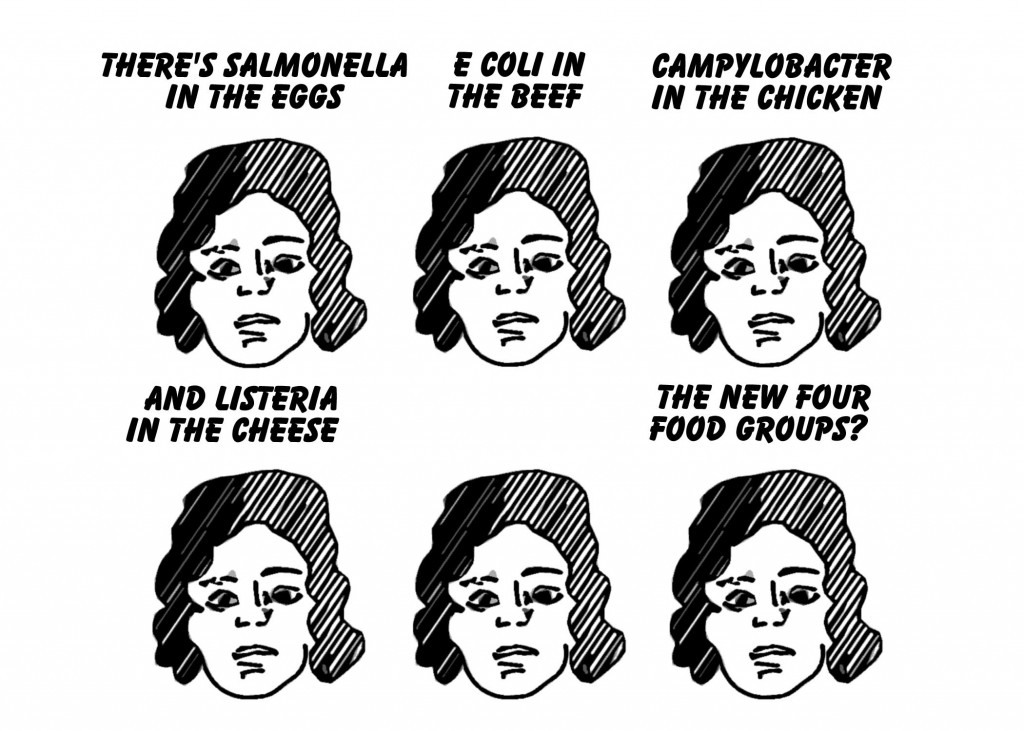 One of the late Sen. Ted Kennedy’s last legislative ﬁghts was about the overuse of livestock antibiotics. “It seems scarcely believable that these precious medications could be fed by the ton to chickens and pigs,” he wrote in the Preservation of Antibiotics for Medical Treatment Act. Over 70 percent of antibiotics go to livestock, not to people, says the bill and 48 percent of national streams are tainted with antibiotics. Other reports say that almost half of Midwest hog farms harbor the antibiotic resistant germ, MRSA, and 64 percent of workers carry it. Are people who don’t eat meat or drink tap water safe? Guess again. Crops themselves can harbor antibiotics, say food researcher, siphoning them right up from the soil. 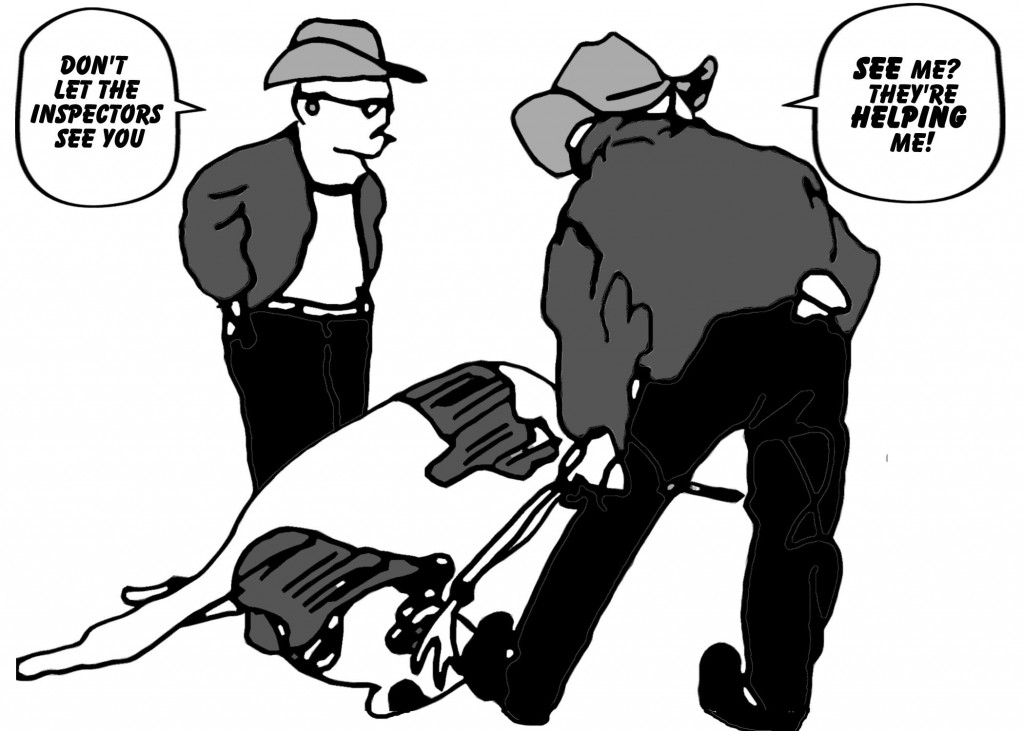 Once upon a time, federal meat inspectors visually examined carcasses for wholesomeness. But under the Hazard Analysis and Critical Control Points (HACCP), implemented in 2000, inspectors now simply ratify that companies are following their own self-created systems–as in “Trust us.” Soon after HACCP, 80 percent of inspectors surveyed said that HACCP limited their ability to enforce the law and the public’s right to know about food safety. Almost 20 percent said they’d been told to not document violations. And 62 percent of inspectors said they allowed contamination like feces, vomit, and metal shards in food on a daily or weekly basis since HACCP. No wonder HACCP has been been dubbed “Have a Cup of Coffee and Pray.”


A delicacy from hell 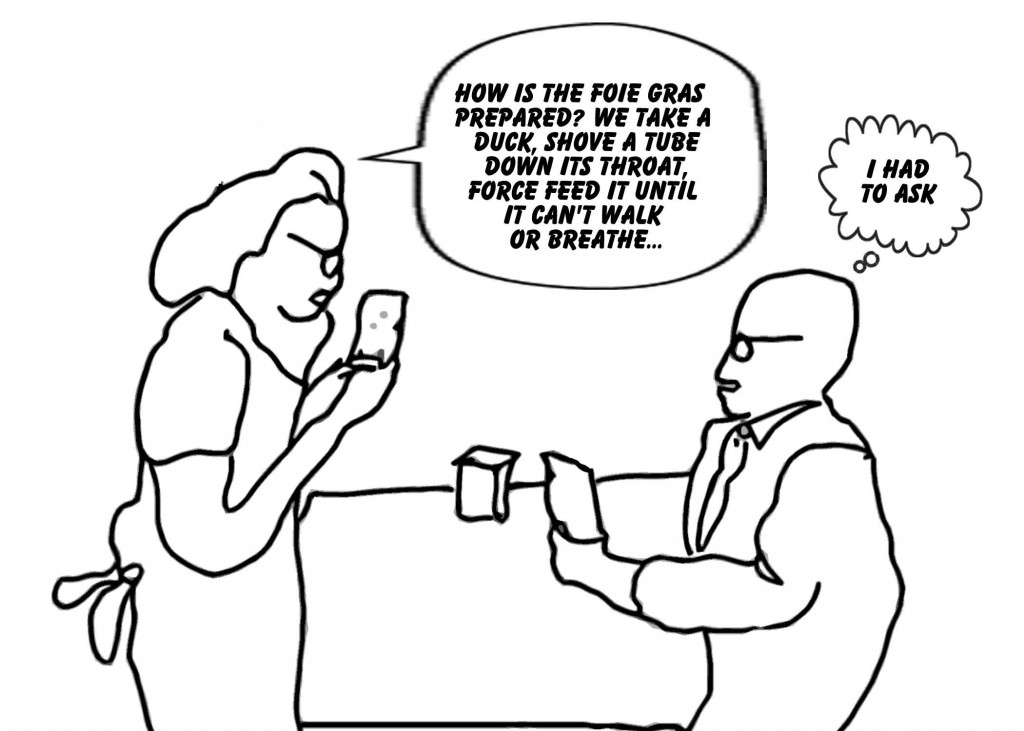 Foie gras is a “delicacy” that requires the indelicate force-feeding of geese and ducks to bloat their livers. Video shows birds with bloody throats, barely able to walk and struggling to breathe. Yet Big Food, restaurateurs and even the American Veterinary Medical Association defend the gratuitous cruelty lest veal crates and other extreme “production agriculture” be questioned next. Foie gras is banned in Europe and other countries but a 2007 foie gras ban in Chicago drew ridicule from the Chicago Tribune‘s food critic (“Has City Council ﬁnally quacked?” Will “quack-easies” surface?) and a Foie Gras Fest backlash from area chefs who served five-course foie gras meals. P.S. The ban was repealed. 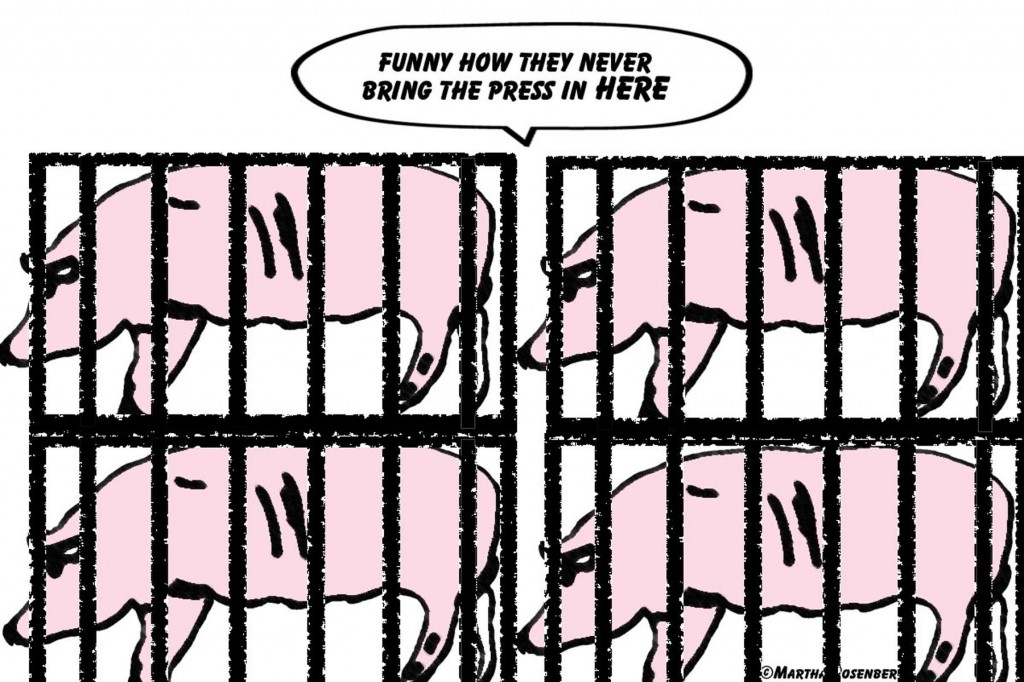 Many of the growth promoters used in US meat production are banned in other countries. Europe boycotts US beef because of hormones like oestradiol-17 and trenbolone acetate which it says are linked to prostate and breast cancer. The EU also disallows farmers to use antibiotics and arsenic as growth promoters, which the US does. (Yes, arsenic.) Still, it is some consolation that most US growth promoters are withdrawn in the weeks before slaughter. Not so with ractopamine, an asthma-like drug given to 60 to 80 percent of US pigs, 30 percent of ration-fed cattle and an undisclosed number of turkeys. Ractopamine, which few are aware of, is given during the last weeks of life and not withdrawn before slaughter. 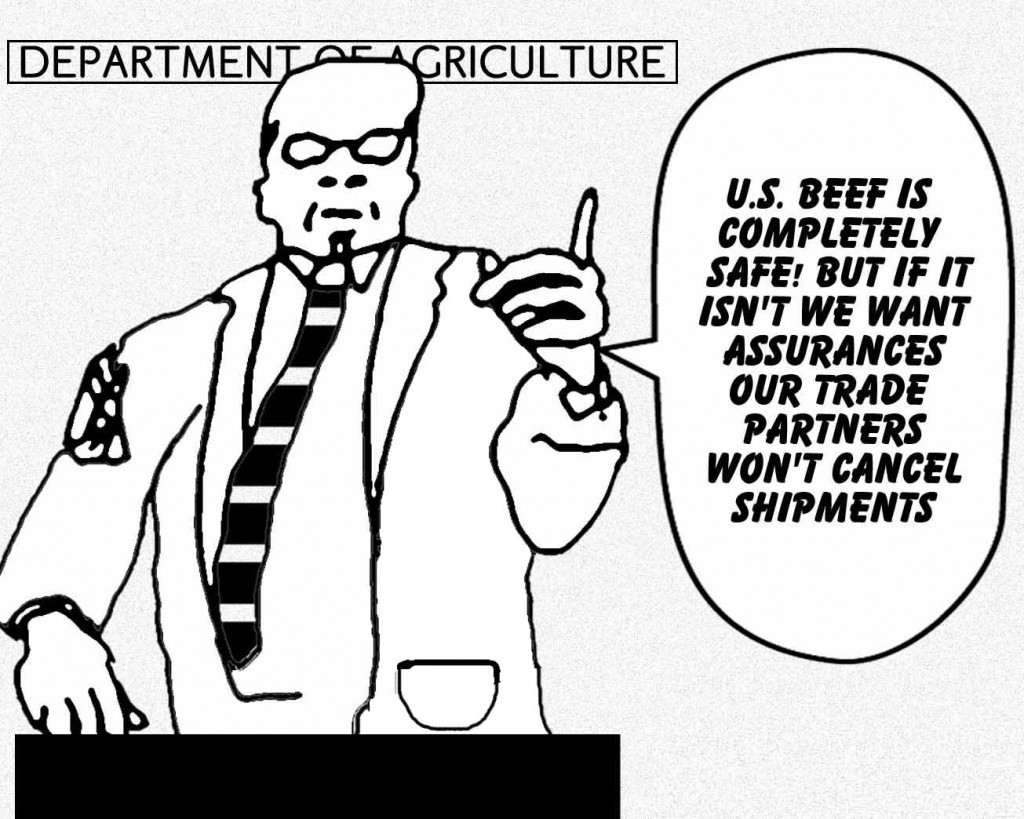 Does anyone remember the government’s misinformation and ineptitude with the first three mad cows, now that the disease is baaaaacck? With the first cow, a government report said all “potentially-infectious product” had been “disposed of ” in a landfill but the San Francisco Chronicle and Los Angeles Times said it went to California restaurants where it was eaten. That’s very different. With the second cow, authorities did not even realize it had mad cow disease for seven months! The government’s final report says the farmer who sold the cow was “relatively sure” he had not kept any offspring but “there were essentially no records maintained.” Want more reassurances? The ranch was cleared to resume selling meat within one month. 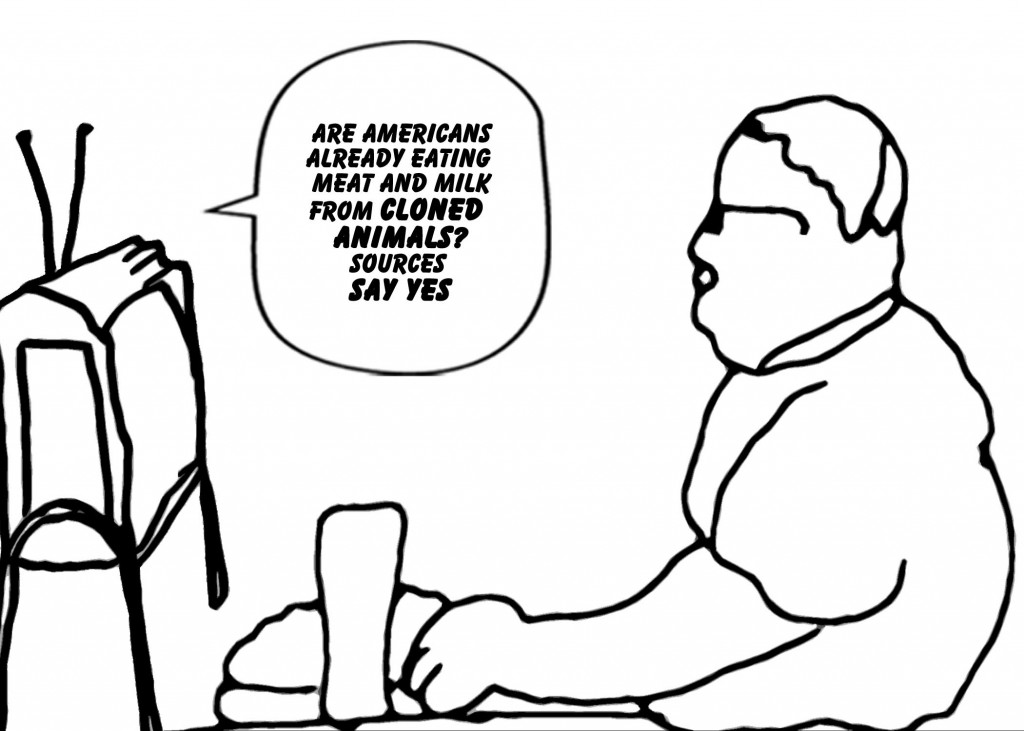 The FDA says clones and their offspring are no different from other food animals and won’t be labeled. (See: rBGH.) But in its own 2008 report it cites cloned calves with elevated glucose, elevated growth indicators, early mammary development, umbilical abscesses and high white blood cell counts. Even the meat and milk is different in one study, the FDA admits. Are Americans eating unlabeled clones right now? “I can’t say today that I can answer your question in an afﬁrmative or negative way,” replied Agriculture Secretary Tom Vilsack to the question in 2010. (Why should the ag secretary know?) “I don’t know. What I do know is that we know all the research, all of the review of this is suggested that this is safe.”

Martha Rosenberg frequently writes about the impact of the pharmaceutical, food and gun industries on public health. Her work has appeared in the Boston Globe, San Francisco Chronicle, Chicago Tribune and other outlets. She is the author of Born with a Junk Food Deficiency (Prometheus Books). Read more >