Cooking with Your Kids | Civil Eats

Cooking with Your Kids 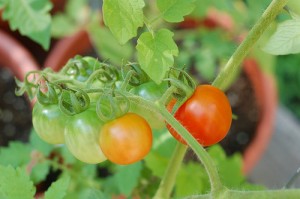 As a little girl, I loved sitting on the kitchen counter while my mom cooked. While I kicked my feet against the cabinets, she taught me how to peel an onion efficiently and how to crack an egg and use my index fingers to get all the white out before tossing the shells into the compost bin. And I still vividly recall the excitement I felt over the beautiful, golden, sesame seed-studded  loaves of braided challah we baked in my second grade class at the Woodstock Children’s Center–they were like some kind of miracle. Childhood is such an important, impressionable time of life when the vast majority of our lifelong habits are formed, or at least pointed in the direction in which they’ll head. That’s why my husband and I want to introduce our son, Will, to growing and cooking food alongside us. 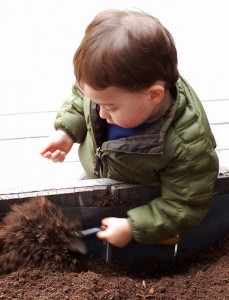 Will, who is just shy of three, watches and “helps” us with our container garden where we grow tomatoes, greens, peas, beans and herbs. At this point, it mostly means he digs in the dirt but he’s learning.

He had the heady experience of drinking cold, clear, slightly sweet maple sap straight from the spile (was this a new vocab word for you, too?) during our first foray into maple sugaring last winter.

And we brought him with us to forage for ramps a few weeks ago (although we confined his enthusiastic excavation efforts to a patch of ground that was not home to this fragile delicacy.) We’ve also gone strawberry, raspberry, blueberry and apple picking as a family–all activities we plan to repeat on a yearly basis.

My husband sometimes plans baking projects in their hours together. At this point, Will’s attention span is still remarkably short so he mostly just enjoys the idea of helping and participates in the “dumping” portion of the experience where he moves pre-measured amounts of flour, sugar, nuts, raisins, etc., into the mixing bowl. Then he gets bored, climbs down from his stool and runs off to do something else.We’ve taken him to local farms and friends’ houses to gather eggs so fresh you have to chase the hens off their nests to pick them up. In addition to teaching him where his food comes from, it’s a great way to kill an hour or so. We have not yet taught him about where the meat we eat comes from, both because we don’t have a great local source and we’re also both a little wimpy about exposing him to something so bloody at a tender age (or to being exposed to it, ourselves, at our not so tender ages…)

It takes about 2-3 times as long to bake something when Will is involved and is inevitably messier and more work but not only are we laying the groundwork for future cooking projects and appreciation of real food, we have also noticed that our notoriously picky eater is MUCH more likely to eat foods he has helped prepare in some way (score!).

Will also enjoys using the salad spinner to dry greens and cutting food (cucumbers and tofu are perfect!) with the adorable toddler knife Rahm got him recently after being inspired by this Slate magazine piece by Nicholas Day on the topic of cooking with pre-schoolers. And he LOVES sitting on the counter smelling and identifying spices (cinnamon is his favorite; cloves and star anise rank second and third.) 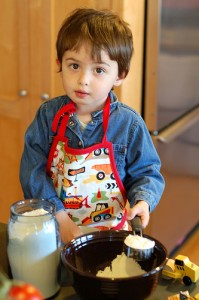 I recently made him a child-sized apron to help him feel at home in the kitchen and, hopefully, keep him slightly cleaner, though it’s a bit of a lost cause at this point in his life. I chose the fabric (called “Dig It” by Michael Miller, in case you’re curious) since he is 100 percentobsessed with digging and construction machines and I thought I should go with something he’s already into.

We figure that laying the groundwork now will not only encourage him to appreciate good food, eat more healthfully, and enjoy growing and cooking his own food from scratch someday, but if we’re really strategic about it, in a few years, we might even get him to cook meals for us! If you are shaking your head in disbelief, check out this New York Times piece by Leslie Kaufman, who got her two sons (ages 10 and 14) to each cook dinner for the family one night a week.

One thing I love about Kaufman’s article is that she does not gloss over the challenges inherent in giving up control in the kitchen–she squirms in discomfort when a flame is left on too long for her taste and has to repeatedly battle her impulse to step in–something she unthinkingly does early on in the experiment that backfires. Her son storms off to his room and misses the meal he’d prepared altogether, despite her apology. 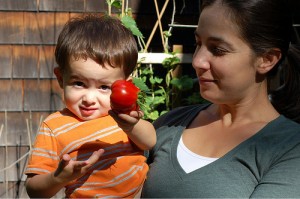 As a perfectionist (fine, I’ll just say it, I’m anal) who views cooking as somewhat of a devotional, semi-meditative practice–I like to clean up as I go and put everything in its place so that there’s no mess left at the end–this is HARD for me! I think it’s good to be realistic about the fact that this is not an easy process–it requires a lot of patience, faith in your child, and a willingness to spend more time and do more cleaning up than you would if you just handled it all on your own. But the end result should be worth it.

If this sounds appealing to you, I’ve compiled some resources to help you in this journey.

Please add your own thoughts and any recommendations you have on approach, books, tools, etc., via comments.