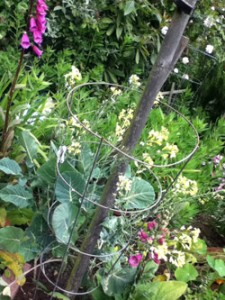 Mary Davis started feeling the squeeze of city life about a year ago. She had grown up gardening and spent a stint working on an organic farm while attending grad school in Missouri. Now an architect living in San Francisco’s Mission District, she longed to reconnect with her gardening roots, but her small apartment was lacking in the dirt department. “There was no garden, no outdoors,” she says. “I really wanted a place with some soil.”

She started looking around her neighborhood and fell in love with the historic Dearborn Community Garden. But when she inquired about getting a plot, she was told there was a 22-year waiting list.

She signed up nonetheless and continued her search, adding her name to the Potrero Hill Community Garden’s list as well, which had a comparatively modest seven-year wait. Since then, Davis has moved into a house with a shared backyard garden, but she still longs for a plot of her own.

Davis’s experience is not uncommon among would-be gardeners in San Francisco. Most of the city’s community gardens have waiting lists of two years or more, according to Public Harvest, a new report by San Francisco Urban Planning + Urban Research Association (SPUR). The most comprehensive report of its kind in recent years, it paints a sweeping portrait of the current urban agriculture landscape and presents a bold agenda to help San Francisco meet the demands of a burgeoning movement.

Since the dissolution of the San Francisco League of Urban Gardeners (SLUG) in 2004, there have been no centralized city-funded efforts to maintain or expand urban agriculture. Residents hoping to start new projects face many bureaucratic hurdles, since public land and urban agricultural activities are managed by multiple agencies, with little coordination. From commercial urban farms to rooftop plots and shared gardens, more than two dozen private and public urban agriculture projects have sprouted up in the City over the last four years as a result of the resurgence of interest in gardening. “We need to start looking to our public land to meet this demand,” said SPUR program manager Eli Zigas at a recent press event at Michelangelo Playground Community Garden in Nob Hill (pictured below).

While San Francisco Recreation & Parks oversees 35 community gardens on public land, those gardens are generally operated by volunteers, not staff. “The gardens are run by gardeners,” says Andrea Jadwin, a founding and active member of San Francisco Gardening Resource Organization (SFGRO), which offers support and training for community gardeners throughout the city. “That’s good and that’s bad because some gardens aren’t very well run.” Garden managers are often inadequately prepared to deal with issues like vandalism or garden members who neglect their plots while waiting lists grow. “If there were an agency helping people run the gardens better, it’d be easy to keep them going with minimal budget,” she adds.

According to SPUR’s findings, San Francisco’s urban agriculture program is middling compared to other large cities. With an annual operating budget of $800,000, or about $6,615 per site, San Francisco spends more than New York but far less than Seattle, which invests $11,940 per site.

Taking SPUR’s findings and recommendations to heart, District 3 Supervisor David Chiu has proposed new legislation that would create a strategic plan and a centralized program to streamline the management of urban agricultural projects, either through the city or a city-funded nonprofit.

The proposed ordinance includes a six-month audit of city-owned building rooftops that could be used for urban agriculture, the creation of a “one-stop shop” for individuals and organizations looking to engage in agricultural activities, and the establishment of garden resource centers that would provide residents with compost, seeds, and tools. By 2014, Chiu aims to develop at least 10 new urban agricultural projects on public land and reduce waiting lists for plot-based gardens to one year.

Zigas emphasizes the minimal cost of such a program for the returns it offers to the city of San Francisco, such as greening the urban landscape and reducing stormwater runoff, which in turn reduce public spending on landscaping and sewage treatment.

He also notes the benefits of urban agriculture for San Francisco residents and the food system at large, connecting city dwellers with the miracles and challenges of growing food. “I think a many gardeners in San Francisco have a great appreciation for a fresh tomato because they know how hard it is to grow a tomato,” says Zigas. “There are a lot of people in the city who learn about food and how it’s produced through that process.”

Having been a member of White Crane Springs Community Garden in the Sunset for nine years, Jadwin has witnessed the benefits that such spaces offer by bringing neighbors together.

“People garden for the same reasons they go to the farmers market,” she observes. “You see your friends and neighbors. You talk about the weather and what’s in season. It not only allows people to have a broader connection to food, but it also builds community.”