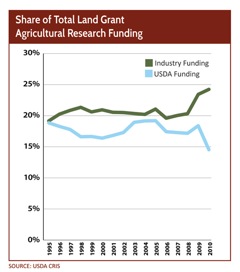 If you live in the United States, you’re never far from a land-grant university.  There are more than 100 of these institutions, which go by names like Texas A&M, Iowa State University and the University of California.

This system of schools was initiated in 1862 with lofty goals in mind—elevating agriculture to the realm of science, offering the common citizen access to higher education, and pursuing research that helps farmers improve their fields and fatten their hens. The program was a major success, providing invaluable research that was freely shared with farmers, which revolutionized American agriculture.

Unfortunately, today these public institutions are increasingly serving private interests, not the public good. Hundreds of millions of dollars are now flowing from corporate agribusiness into the land-grant university to sponsor buildings, endow professorships and pay for research. One land-grant university, South Dakota State, is headed by a man who sits on Monsanto’s board of directors.

The influence this money purchases is enormous. Corporate money shifts the public research agenda toward the ambitions of the private sector, whose profit motivations are often at odds with the public good. It strips our public research institutions of the time, resources and independence needed to pursue public-interest research that challenges the status quo of corporate control over our food system or that offers farmers alternative agricultural systems to monocultures and factory farms.

It also means that our nation’s regulators and policy makers—always clamoring for science-based rules and regulations—are making decisions about things like the safety of genetically engineered crops based on a body of research and science that is incomplete and, to some degree, biased.

So how do we weed out the agribusiness influence?  A good place to start would be increasing federal support for agriculture research—and directing this money to projects that serve the public interest.  This would go a long ways toward reducing land-grant university’s dependence on corporate funding and allow researchers more independence.