Pink Slime and Mad Cow Just the Tip of the Iceberg 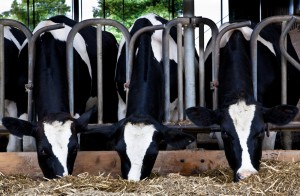 Following on the heels of pink slime, mad cow disease (AKA bovine spongiform encephalopathy—or BSE) is back this week after a California dairy cow destined for a rendering plant that makes pet food was found to have the disease. So far, it looks like the beef industry is playing down the finding, hoping to dodge a loss in sales at home and abroad. The U.S. Department of Agriculture was quick to tell Americans that our food supply is entirely safe.

But the re-emergence of mad cow and the conversation around pink slime has re-opened questions about our food system. It has exposed how food safety falls inevitably through the cracks in a country where over 9 billion animals are being slaughtered per year and budgets for the departments that oversee these processes are being slashed. The incredible media coverage of both issues reflects a growing consumer interest in more transparency in what we’re eating and how it’s being produced.

While this is only the fourth case of mad cow in the U.S. to date, experts argue that finding it this time was a stroke of luck. Of the 34 million cows we slaughter annually in the U.S., 40,000 are being tested by USDA for the disease, down from nearly 500,000 in 2005—about one tenth of one percent.

Some would like the media focus on mad cow to be re-directed to other ongoing and serious food safety issues. Dr. Marion Nestle, professor of nutrition at New York University and author of Safe Food, is among those connecting this finding of mad cow to other unfortunately routine (and in some cases, deadly) food safety issues. “The risk of you getting this disease from eating beef is extremely small,” she said.

Sarah Klein, of the consumer advocacy group Center for Science in the Public Interest told the AP, “What we know is that 3,000 Americans die every year from preventable food-borne illnesses that are not linked” to mad cow disease. She continued, “Things like E. coli, salmonella–that’s where we should be focusing our attention, outrage and policy.”

Mad cow originally captured the public’s attention because of the grotesqueness and serious consequences of the story. Back then we learned that cows were being fed parts of other cows–some of which had been infected with the disease, and thus BSE was able to spread easily among herds. Worse were the photos of human suffers of the lethal prion, an infectious agent that degenerates the brain. The disease takes years to show up, and looks somewhat like an accelerated version of dementia, making it more difficult to trace–and adding to the public fear factor.

Similar to mad cow, pink slime struck a chord with consumers who were disgusted by the idea that less desirable parts of the cow were being made “safe to eat” with the addition of ammonia. Through the weeks of media coverage we learned that pink slime, or “lean finely-textured beef,” is a regular ingredient in the hamburgers used in school lunches and in 70 percent of the ground beef sold in supermarkets.

The USDA insists that the strain of mad cow found this week is a random mutation that occurs from time to time in older cows (the cow in question was 10 years old and found lame and lying down) and that no harm could have come to humans should it have gone undiscovered. Specifically, the USDA has stated that this dairy cow couldn’t have transmitted the disease through its milk. Yet Tom Philpott at Mother Jones draws attention here to a study in which a similar prion was transmitted from sheep to sheep through milk.

In addition, Dr. Michael Hansen, PhD, a senior scientist at Consumers Union, told me that some of the practices that led to the mad cow epidemics of the past are still being employed, like “feeding cows’ blood back to cows, feeding chicken litter to cows and allowing ground up cows to be fed to pigs and chickens, then allowing ground up pig and chickens to be fed back to cattle.” These practices are banned in Europe, Japan and Canada. According to Hansen, a team of scientists including the former head of surveillance at USDA, Linda Detwiler, recommended in 2005 that the FDA stop “the legal exemptions which allow ruminant protein to be fed back to ruminants (with the exception of milk).” [PDF of the letter here]

Mad cow deserves our attention and we deserve to know the truth about our food system. It is but one small piece of the puzzle of overcoming our food safety challenges and a potent reminder why our food system needs an overhaul. Now let’s just hope that enough public pressure forces our regulatory bodies to step up to the plate and act, and that the government has the impetus to fund and enforce new regulations.